This was the last RSNE tour stop this season which was bitter sweet! Every Saturday, we look forward to the RSNE event which is the driver for where we go each year for the most part. Not only is it low cost skiing at each report/mountain but it is a party too! Today’s party was cool because many of the faces we see with Ride and Ski each weekend were here in force and much reminiscing was taking place as well as plans for spring skiing. In any case, I digress!

We did not know what to expect for conditions when we arrived, but looking up the slopes from the lodge – it looked pretty promising. The temps were colder than originally expected around 24 but that in my mind was perfect since it still felt like Winter and snow preservation was still full on! Once we hit the lifts we opted to take Quadzilla to the Sunnyside Triple. Since the line for White Peak Express was too long for my liking. Most often I generally lap the Sunnyside Triple and that is what we did! Ciao, and Gema and Oblivion were the go to runs. I wanted to take True Grit but the others wanted to start more simply. Ciao was partially groomed with a powder bump mess off to the side. Gema skied nicely with its winding turns. The snow on all trails was quiet/soft and glided/carved well! I skied it for a bit but it was somewhat unpredictable with a hard pack/powder mix. After four runs we went into T-bars for early lunch and a couple drinks with the idea of getting back out while others were eating.

Our plan worked out perfectly and once we got back out the White Peak Express had no line. We lapped that chair as long as we could before the crowds returned which was another four runs which we mixed up on Tippecanoe, Tyler Too, The Boneyard, Tommy’s World Cup, Sel’s Choice, and Utter Abandon. The Boneyard had the best bumps that I could find that had good snow and I could find good rhythm. It was nice for the non bump skiers since it was half groomed. In fact all trails that did have bump (typically) were half groomed. Tippecanoe and Tyler Too (haha) are both wide cruisers that allow you to get up to speed. Tyler Too was left ungroomed with a sign up which seemed to scare off people since it had a lot of untracked and it skied beautifully! Tommy’s World Cup, Sel’s Choice, Utter Abandon all skied really nice as well The only issue was the pelting snow/sleet mix. It started snowing like crazy after lunch which was also very cool! One touchy spot, I was skiing down Utter Abandon as the trail is named and got about two thirds the way down and on the other side of a knoll the trail was roped off for racing – I damn near bit it and had to pull a hard turn to avoid it – signage would have been nice in advance.

My wife and Jeff from Ride and Ski headed in to get ready for the Ride and Ski Party at T-bars while I opted to do two more runs one on Bobby’s Run and the Other on True Grit. Bobby’s Run was in good shape on the groomed section but I did not venture into the ungroomed which was made up of Powder over bumps – the wind blew snow to give it a flat (not bumped) appearance but everyone going in there looked like fish out of water and not on their skis! True Grit was in pretty good shape but did have some rather large scraped off areas. Earlier, I was watching skiers and snowboarders alike sliding sideways much of the way down the steeper pitch which drives me a little bit crazy. They should just carve their way down or not get on the trail! I have to say that lighting was flat all day and adding snowfall and its effect on visibility, well it did effect skiing on trails where powder bumps formed (seemed like the popped out of nowhere).

The Ride and Ski Party was a reunion of sorts and it was cool to hang with everyone. We helped Jeff with the Party as we always do handing out swag and I have to give kudos to T-bars or someone for comping us a couple drinks. The day was a blast and it was sad to see the last Ride and Ski event of the season – we always enjoy them! It drives the idea home that the ski season is nearing a close!

Speaking of the season nearing a close, it is really hard to vision that 50% or more of the ski areas will be shutting down operations over the next two weeks. The trail counts are 100% everywhere, snow conditions are almost better than any other time of the season, and it just feels like mid-winter! We spoke to a Waterville Valley employee and they said one of the mains reasons for hard closing dates is due primarily to staffing. They just lose out the part-timers who are transitioning to summer jobs (hard to think about right now), losing out to families switching to spring sport (our case on Sundays now) and high operational costs vs skier/snowboarder visits! I read in another thread that Killington had relatively low visitors for Saturday and Sunday and they were not alone. Some resorts even went as far as stating that most of the skiers this time of year are pass holders which impacts high operational costs vs nonpaying skier/snowboarder visits. I guess it is a little slap in the face if your mountain shuts down and came out with a statement like that.

Thanks Ride and Ski New England for a great season - looking forward to next season already! 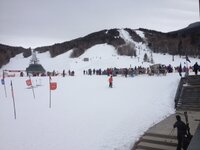 Came out from lunch to walk through these and it got worse by the minute! 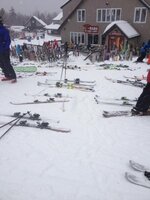 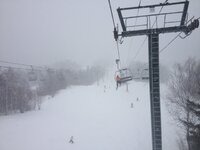 Near White Out - Awesome 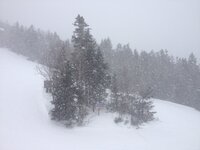 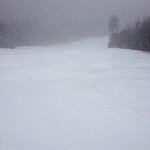 Is this guy made of lead?

Damn @dlague, looks amazing, you definitely get out and ski. A LOT Cool pics and report.

MadMadWorld said:
Some of us on this board would have had a field day with all those skis laid out like that
Click to expand...

I was looking at some old photos from the 50's and 60's, and a lot of people left their skis out like that in the day.

very little rack room in that spot. think I could find my way around that mess though

Catamount has a custom snowboard rack made of some solid wood. It had slots that could hold about 10 boards horizontally, thought that was cool instead of the metal ones that scratch up your equipment.

Domeskier said:
Is this guy made of lead?
Click to expand...


jaysunn said:
Damn @dlague, looks amazing, you definitely get out and ski. A LOT Cool pics and report.
Click to expand...


skifree said:
very little rack room in that spot. think I could find my way around that mess though
Click to expand...

We managed - but it got worse about 30 minutes later
You must log in or register to reply here.