Whiteface on Sunday March 2nd was a great day. The forecast was originally saying negative temperatures, but the actual temperature was between 4˚ and 10˚ or so. It was flurrying throughout the day- it may have added up to maybe an inch throughout the day, but it wasn't too noticeable. The snow was generally soft, with some powder and packed powder and some ice only in the windiest, most skied-off places. The lift lines weren't bad at all.
I skied all over the mountain with my little brother- most runs were open, except skyward, cloudspin, lookout below, and, unfortunately but expectably, the Slides.
Runs of the day were the Wilmington trail (really great snow on top) and the Cloudsplitter glades (which were steeper and more powdery than expected).
The cross-country skiing the day before on the Van Hoevenburg trails and on Lake Placid was also very enjoyable. 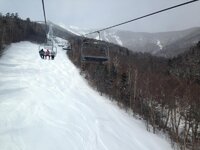 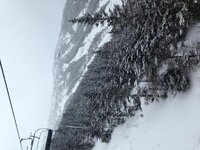 sorry i'm not sure how to rotate that bottom picture.
You must log in or register to reply here.

M
How is Whiteface these days?