Trip Report: With $9 lift tickets on April Fools Day, it was a no-brainer to visit Wildcat. I had never been to Wildcat before and I always look forward to visiting new places. I also had not been to Attitash since the American Ski Company days so I decided that maybe if I felt like it I would go to Attitash for the afternoon since lift tickets are valid at both ski areas. I was a little bit worried as I was driving through light rain all the way to the mountain, but by the time I arrived it had stopped.

I arrived about 9:30. There was about 2 inches of new wet snow at the bottom and about 4-5 inches at the top. The new snow tended to slow everyone down, but it was nice to have on the moguls and steeper runs. The best runs of the day were the two trails down the center of the mountain which had great bumps, lots of obstacles to go around, and some great jumps. There was a decent amount of people there considering the rain. About 3 in 4 chairs up Wildcat Express contained skiers and riders. While I don't normally like more people, it is nice to see people coming out to ski late in the ski season since then ski areas will try to stay open later.

At about 1:15, I decided to check out Attitash so I did the 20 minute drive and hoped on the summit chair. It was a relatively nice day by then. I was surprised to find the place completely empty. They had the Summit Triple, Flying Yankee Detachable Quad, East Double, Abenaki Quad, and the Flying Bear Detachable Quad spinning, yet each lift maybe had maybe no more than 20 people on it at any given time, most less than a dozen. I think there were times where the relatively short Flying Yankee detachable quad had no one on it. Perhaps the reason was because of the especially slow new snow. Even the intermediate trails meant lots of hiking. I made the mistake of heading over to Bear Peak and I got a workout for my legs, but I decided to head back to the Attitash side since the terrain there is steeper. By three o-clock a light rain started, but the few people that were around were not deterred. At 3:55, I got on the Summit Triple for my last run and that ended up being the last chair of the day.

Being especially interested in ski lifts, I took over 400 photographs of mostly the lifts. However, I attempted to document the Wildcat Express three times with the weather improving each time so that is probably 150 photos right there. I did manage to document three of Wilcat's lifts with somewhat decent weather. However, someone from remontees-mecaniques has already visited Attitash so I didn't bother to photograph any Attitash lifts specifically to document them.

Here are three photos of the day, all at Wildcat.

A view from Wildcat Express of Mount Washington enshrouded in clouds: 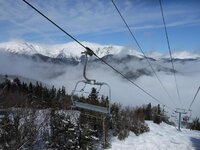 One of the first runs of the day: 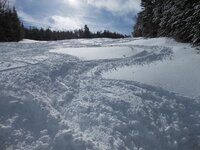 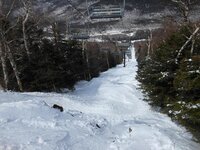 +1
Wildcat probably has one of the best scenic views.

Thanks, although you don't exactly have to be a professional photographer to get amazing photographs at Wildcat. :wink:

Nice TR those are some dope pics
You must log in or register to reply here.