Kinda got a bad night's sleep (room is right across from the f*cking elevator) and so got a late start and wasnt on skis till about 10:15. Snowed lightly the whole way up which set the mood for a great day.

Started with a few off the Bonnie, beginning with Can-Am which was still loaded with powder at that point. They never made snow on it this year so a few rocks to avoid, but fun way to start the day. Hopped into Showoff Glades which were all tracked out but in nice shape.

Moved over to Canyonland which was decent as it is lower angle for the most part. Gets pretty busy though so there were a few crummy spots. Went across into Bonaventure Glade which was the same as Showoff...nice and soft but fully tracked out.

Vertigo was next. River Quai was an adventure getting over there and it didnt get much better in the woods. Between this and Deliverance later on, I can say that the steep woods off Bonnie are pretty much pure shit right now and would advise to steer clear. Lots of skied off areas down to rock and stumps and a lot of ice as well.

Moved over to the Jet next which definitely was displaying much better conditions. Started with Timbuktu which I think everyone in the state has skied in the last 2 days. There were people everywhere and it was very skied out. The bottom had some great fluff though and was a nice way to end it.

Found the good the next 2 runs in Jet Woods and then under the Jet liftline and the woods next to it. Both of these had less traffic and some untouched powder in view of the lift. Would return for many repeat laps later on.

Kitz Woods was also skiing really nice, a little more tracked out but still tons of powder and otherwise soft where the heavier travelled lines were. Hells had a couple crap areas right at the top but also got really nice. This whole side of the mountain has a lot less low tide thanks to being slightly less steep and really was phenomenal today.

Broke off for lunch at 12:30 with intentions of heading to tramside after, but turns out both the Tram and Flyer went on wind hold right then and would never reopen today. So headed back up Bonnie to the aforementioned run on Deliverance. Easily the worst thing I skied today. Those chutes are totally skied out and despite a few hundred feet of good snow near the bottom, it's not worth it at all.

Spent the last couple hours lapping the woods off Jet. Line grew to 5 minutes at one point as all the folks came over from Tramside, but not too bad and those woods stayed sweet all afternoon.

Overall a great day (as Jay usually is) and excited to do it all over again tomorrow with yet another 3-5" refresh. 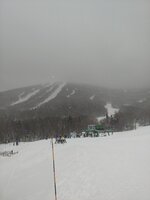 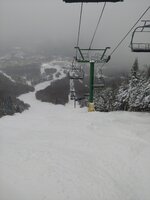 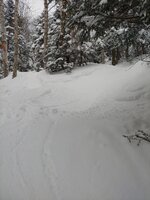 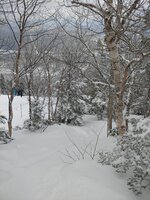 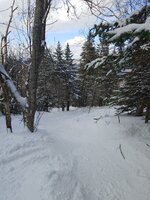 After skiing hard yesterday, waking up was a chore today and once again I was tardy for the opening bell. They got 4" overnight again, but this time the cold breeze from yesterday was replaced by a light warmish breeze. Around 10:30 I finally jumped on the Bonnie.

Started the day attacking Tramside as I never got over there yesterday. Hopped into North Glade and there were many untouched lines in there. And what wasn't untouched was silky soft. What a great way to start the day.

Went out to BPG next and it was in good shape, but more tracked out and honestly it's too short to be worth dealing with the crowds and runout on Ullrs. It would be a great glade to have at some other hills but probably my least favorite of the major glades at Jay.

Next up was the woods between Wedelmaster and JFK. Lightly tracked with a lot of fresh lines and the whole area was in great shape. Don't think I ever hit that area when I was in college, not sure why but I really missed out.

Everglade was a bit of a dud. With the thin base underneath the new snow, the rocks at the top were very apparent. Then in search of fresh lines I drifted too far left and spent 10 minutes bushwacking and crossing creeks to get back to civilization.

After a repeat in North Glade to kind of romp without worrying about steep rocky chutes or getting branches in the face, I hit Staircase which was quite a bit better than Everglade. Rocks at the beginning were covered a lot better and then it was super soft the rest of the day.

The sun was fully out at that point and it was getting warm down low, but the woods stayed fresh all afternoon. Got in line for the Tram around 12:30, ended up waiting a few cars as I totally forgot this one only holds 45 people and they don't cram you in like at Jackson. I was sweating my ass off standing in line, a weird problem to have on a powder day. Since I havent really been actively skiing this year, I decided to avoid the chutes and hit Valhalla. Base wasn't bad, but the snow felt a bit too exposed to the sun. Not my favorite run of the day but not too bad either. Dropped down to Hells Woods, which was full of soft snow, I think because the entrance was kind of shitty so people werent going in.

Grabbed lunch around 1:15, then went over to the triple to hit a couple of yesterday's favorites. Jet Woods was spectacular...tons of fresh lines and the whole thing was soft top to bottom. Then Kitz Woods was also in very nice shape followed by the still nice Hells Woods.

Debated lapping those the rest of the day, but decided to go get seconds on some of my Tramside favorites. North Glade, JFK woods, and Staircase were still skiing nicely although Staircase was a bit more blown out at the entrance.

At 3:50 I headed into Canyonland expecting it to be my last run. It was definitely baking in the sun but was also skied out so it was kind of wet packed powder. It was ok but not how I wanted to end the day. Beelined it over to Jet with 2 minutes to spare and finished things up right with Jet Woods. No better way to end the day than with soft fresh lines, probably the last ones I'll ski this year.

Tremendous two days at Jay, 29" total since Saturday including 4" refreshers both days I was there. Great to finally get some good skiing in this year. Hitting Sugarbush on the way home tomorrow, not sure how much energy I have left but will try to enjoy Castlerock for a couple hours. 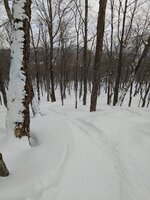 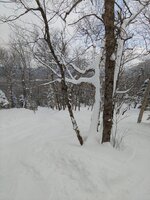 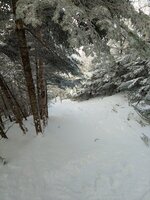 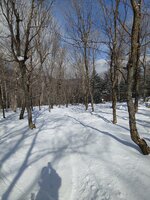 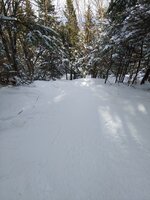 Great pictures, you really timed it right. I just arrived at Jay and appreciate the intel - I ski Maine and have only been to Jay a few times. It's been snowing lightly this evening, have a good feeling about tomorrow...
You must log in or register to reply here.