It's been a long shitty winter for me. No I haven't fallen off the face of the earth with my reports, today really was day 2 for me. I wanted to get up to Sunday River as they did much better with the Monday system, but with limited time I ended up settling on Loon. Not much of a crowd today, but not much to report either as it was primarily a groomer day. They got a touch of freezing rain Monday, but enough to crust all the naturals and make them rather ugly.

Started and ended at South and spent the majority of the day on North with a few Kanc runs thrown in. Successfully avoided the Gondola. South had the freezing rain infused hardpack on the groomers, which the sun kind of helped out midday before it went behind the mountain. Twitcher and Ripsaw were fun and soft down the far left sides. My new Nordica Enforcers have some real good blades on them, so I actually seeked out some hardpack on purpose and it was fun to really lay an edge into stuff I haven't been able to in the past.

Speakeasy off the Kanc was my first encounter with ungroomed of the day and I quickly found out how ugly any woods or bumps would be. Totally crusted over. A shame as the coverage is pretty decent, but will need a refresher to make it any good (and it's not coming any time soon). Also ripped a run down Blue Ox, my favorite cruiser off the Kanc as it has limited intersections and usually limited people. The new Kanc 8 had no line and is totally overkill for the terrain it serves, but damn those seats are comfy!

Over at North, the top few hundred vertical feet seemed to escape the effects of the freezing rain. Tops of Flume, Walking Boss, and Sunset were gorgeous packed powder. I tried the glade next to Flume off Haulback first and it was too low to be good. All hardpack and not fun at all. However, the beginning of Walking Boss Woods had some nice soft snow before getting rather shitty halfway down. I wanted to ski the woods a lot today to get used to the longer skis, but it wasn't happening as there is no bailout of those woods and it wasn't worth skiing the bottom part. Big Dipper and Cant Dog were roped off so skiing Sunset was useless. Did many repeats on Flume, like I said the top was nice packed powder and then the hardpack on the lower half was a ton of fun with my skis.

That's pretty much it. Been dealing with a really awful winter at work which has severely limited my opportunities to get out. Just when I thought things were getting better, I found out today that I have to cancel a Jay trip this weekend and due to family issues can't get out on Presidents Weekend and then had to bag my west trip. So it might be March before I get day 3. On top of that, I've been dealing with some pretty bad anxiety and depression this winter and not being able to get away on some ski trips is just making it worse. On the very few free days that I've had, I just haven't had any desire to go day trip anywhere. I'm hopeful that I can get some use out of my Ikon and Indy passes that are burning holes in my wallet this spring, but I'm also just ready for this winter to be done to be honest. Might be able to sneak away Sunday for a few hours if I find the motivation.

Thanks for the report!

Am going Monday, good to know current conditions. But, with what is coming in next 4 days, hard to say with what it will be like then. Wild swings each day. Warm, then Snow Sunday, cold Monday.

Will be my second day following two seasons of health issues. Kept reading the ski forums, and thinking about getting back skiing. Same too with MC riding. Life does change and we do get better! Focus long term. My buddies still have me at top of the dead pool, nobody collecting yet !!!
N

Sorry to hear that it's been a tough winter for you. I always really enjoy your reports. Hope you are able to get out and enjoy some good ski days in the latter part of the season. Hang in there!

Hey Zand hang in there bud. Hope you'll find a way to get some more turns in. Ive always appreciated your detailed reports.

Zand I hear you about the depression issues. Hang in there buddy.

I had anxiety issues in my 20s. Hang in there. See a doctor if necessary. I did. Best thing for me in the long run was to stay active with skiing and other sports.
I was here yesterday and had the whole place to myself, talk about peace and quiet!! 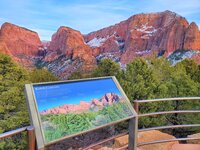 jimk said:
I had anxiety issues in my 20s. Hang in there. See a doctor if necessary. I did. Best thing for me in the long run was to stay active with skiing and other sports.
I was here yesterday and had the whole place to myself, talk about peace and quiet!!
Click to expand...

Hope you are good now
You must log in or register to reply here.