Plane was originally supposed to land in Jackson at 11:15 but after a 1.5 hour delay in Denver and the longer than normal process of baggage claim and car rental (because Jackson's airport is just this cute little place) it was after 1:30 by the time I was in my car. Jackson's snow report said all village parking was full, so I figured I'd drive a little less and deal with way less people by checking out Snow King.

For some reason I never considered checking it out before today. In my head I saw it as a Lyndon Outing Club type place...cool for the town but why would you go there when you only have a few days to ski one of the best resorts on earth. Obviously I knew it was a little bigger but as I pulled up I realized it's way bigger than I thought. Quick check of their website and I learn that it's actually almost 1600 vert and its very steep and in your face with no runout.

To me it skied a lot like Plattekill...slow double chair was the only way to the summit yet it was only a 6 or 7 minute ride because the mountain is so damn steep. Then you have the choice of a couple very steep groomers, lots of ungroomed stuff, and some awesome looking woods between every trail. There was alsona narrow snaking catwalk from the top if you need an easier way down. Actually started to remind me of Snake Creek at Brighton but MUCH larger and steeper. The best part is that there were maybe 50 people on the hill (and 20 of them were touring instead of riding the lift) and there was untracked powder and untouched corduroy everywhere you looked. Ungroomed stuff was nice and soft, bodes well for the week.

The one drawback was that I didnt read the website carefully and Sunday is the one day they don't have night skiing. I took a long lunch thinking I had till 6:30 and therefore ended up with a total of 5 runs when the lifts stopped at 4. My fault but I was bummed after seeing a lot of stuff I wanted to ski but didn't get to. Still very glad I stopped in though.

If you're ever in need of a half day while you're in Jackson and want a nice uncrowded old school day, check this place out. I was blown away at how awesome of a hill it is. Not to mention the views of the Tetons and downtown Jackson are absolutely unreal, especially on a beautiful sunny day like today.

Unfortunately my new phone doesn't like to cooperate with AZ so pictures will have to wait till I get home. Ready for 5 days of insanity at Jackson Hole.

Every time I go there I look at it as I pass by and say..damn thats steep. Have to try it some day..

Nice TR. Snow King is on my list of must-dos.

The view from Snow King was incredible on a bluebird day. 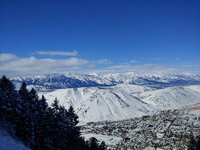 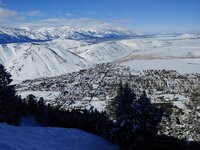 A few from the liftline slope, can kind of see the steepness. Wish I took more that day but it ended earlier than I thought it would. 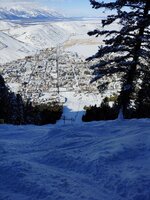 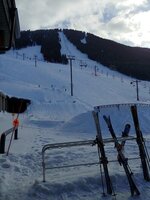 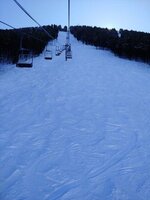 Fixed rotation problem. Now to figure out which of my ~100 Jackson pictures to post.
Last edited: Feb 15, 2020
You must log in or register to reply here.