bdfreetuna said:
I give Bolton Valley the edge for low-key 1500-2000k vert. Then again that's another discussion.

edit: Just realized Pico comes in at 1,967.. BV still wins when it's full on though
Click to expand...

I would not order them that way and but more of a Magic, Pico, BV order. I like all 3.

steamboat1 said:
Your a class act dude mentioning my wife (what a low life). You'd have a hard time keeping your hands out of your pants pockets playing with yourself if you saw my wife. Introduce yourself one day so I can kick you in the balls.
Click to expand...

Almost word for word reply to a post by Highway Star over on KZone....

steamboat1 said:
Your a class act dude mentioning my wife (what a low life). You'd have a hard time keeping your hands out of your pants pockets playing with yourself if you saw my wife. Introduce yourself one day so I can kick you in the balls.
Click to expand...

Why would he introduce himself if you're going to kick him in the balls? That makes no sense

farlep99 said:
Why would he introduce himself if you're going to kick him in the balls? That makes no sense
Click to expand...

He's not Japanese is he?

WWF-VT said:
Almost word for word reply to a post by Highway Star over on KZone....
Click to expand...

Yes both low lives brought my wife into the conversation in a demeaning manner.

Do you think that's OK?

Would you like for me to talk shit about your wife?

Why do you even mention my response?

And now back to our topic of Magic Mtn.

Looking forward to a great season.

Sent from my iPhone using AlpineZone 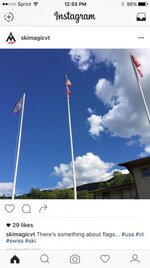 Does anyone recall what yr is was that Magic opened Sorcerer on man made snow? I recall skiing it within the last 5 yrs and it was open after some repairs had been done (for just that 1 season)

Sorceror, to the best of my knowledge has not had functional snow making since at least 2006. They can make snow at the top on Wizard and push it down but the pipe needs work and to be reconnected to make snow on the actual trail. I'm stoked to hear they are giving it a go this fall.

That's right. It's been at least since 06. But we're going to try to repair it.

Master/Upper Magician has been open a few different times (yes, no rope) in the last few years (12/13, 13/14 and 14/15) except of course for last year when the entire west side never opened.

slatham said:
I think your logic on Witch to Blackline Is spot on. It is also less linear feet than getting Wizard to Tali and the runout covered, yet gives you a challenging expert trail. And the visual impact of clearly seeing snowmaking and solid coverage on Blackline is compelling.

A few years back it was mentioned that the pipes on Witch/Blackline were repaired. Regardless, you won't know until they light it up and see if it holds.
Click to expand...

People are way too hung up on what the assumed percentage of coverage is by the snowmaking system. There are a million ways to skin a cat and the knife gets sharper every day. West side snowmaking ability is definitely a priority though. Efficiency improvements and gun upgrades will go a long way as well but the simple things like a dependable easy way down and quick setup of cash generators that have been neglected in the past also make a big impact when your operating costs are relatively so low.

Witch->Black would likely be faster and cheaper to do than Wiz->Tali and I agree the statement alone in having it all blown in for the first time since the 80s is pretty big. From there Sorc is the next cheapest and that will also be online for this season. The whole mountain is going through a big fat checklist of testing and cataloging and I am over the moon that the new group has the desire and wherewithal to actually utilize all the pipe Magic has. To see the things they've immediately targeted and taken action on is incredibly exciting. There will always be detractors who with a "someone else's checkbook is never large enough for my ambitions" type of attitude but that isn't what this is about, nor do I really think that's what fits the bill in this case. Honestly if someone was spending more faster on the projects at hand, they'd be wasting money somewhere and bang for the buck counts more than ever. The crews out right now are focused and executing exactly as planned- yes if we could have had the original timeline of this spring we'd be farther along, but there's nothing we can do about that but double our efforts now and tack on a few weekends for good measure.

Loving the tone of the new thread though, thank you for that! The platitudes will have to suffice until the Due Diligence period is over, but rest assured there will be a multitude of very tangible changes. Many of the complaints and criticisms ive read here are verbatim what has been voiced by the exact people who are on this buyout team, except with more yelling and fist pounding too btw- they were literally so pissed they put up a few million bucks and spent 3 years trying to get here! So to all you skeptical curmudgeons- you're preaching to the choir! This buyout team is sick of watching this jewel mismanaged and limped along too. If people *really do* want that kind of classic experience to survive though, slatham is absolutely right- it's time to show up or shut up. The Magic crew is working harder than ever on all fronts and is throwing the doors (and their arms) open, and the holdouts WILL be amazed when they realize what they've been missing.

Last year was atrocious, but even if that weather was to repeat itself with none of the improvements allotted and underway for this season, the mountain would still be infinitely better equipped to deal with that contingency. I have never been more confident or optimistic about Magic's future, and every single day it gets brighter. I will spare people fluff, but I just want people to know that things are happening very quickly. Stay tuned and stay stoked!

farlep99 said:
Why would he introduce himself if you're going to kick him in the balls? That makes no sense
Click to expand...

Steamboat - that's a really disgusting way to defend your wife's honor. You should be ashamed of yourself.

I'm not sure why AlpineZone wasn't granted exclusive access for press.

Love seeing all the social media updates and work that is being done. Great shot this am on instagram of the Black counter weight wheel getting some love. I pray for no surprises......
S

Info on pass pricing has been posted on the Magic web site. Not for sale until deal closes. Some great deals to be had. Take a look.

Magic just went loco in a good way with the season's pass options. Some pretty cheap options that still get you a lot of skiing.

bdfreetuna said:
Magic just went loco in a good way with the season's pass options. Some pretty cheap options that still get you a lot of skiing.

Absolute steals! I will getting the shredder pass and throwback card for ye ole lady.
You must log in or register to reply here.