Sitting in the shuttle from Vancouver to Whistler, it’ll be a 2 hr ride according to the driver. Time to start the trip report.

4 years ago, I spent 10 days at Whistler. All it did was wetting my appetite on what it has to offer! I know one can spend a life time skiing there without getting bored. I’ll just have to do a few small chunk the next few years. So after last season of fighting the crowds in my favorite “quiet” resort such as Big Sky and Solitude, it’s time to switch my focus to Vail Resort and embrace the crowd in its iconic flagship again.

Whistler traditionally has very good early season snow record. So my plan was to go in January, a relative “low” season. Less crowded slope and also leave enough of the “main” season to ski near home in the northeast. To my delight, flights to Vancouver was dirt cheap for much of January (~$300).

But the weather threw a monkey wrench to my plan. Whistler didn’t get much snow in December. So January looked very thin. I waited, waited, and waited some more... And finally in earliy-Jan, it started to dump! Oddly, the upper mountain still didn’t open for nearly a week. I even started to look elsewhere in the Vail empire for alternatives. Fortunately for me, I have connection to a wonderful resource in the form of bestsnow.net. An email to its author Tony Crocker, he advised me the delay in opening of Whistler’s alpine terrain were likely due to avalanche control. A call to Whistler confirmed that. They’ve got plenty of snow but it’s unstable. It would take a few more days before they would open the upper mountains.

The $300 flights had disappeared. But Air Canada and Cathay Pacific both have reasonable flights still ($400-500).

I had good experience with Air Canada. It flies out of NYC directly to Vancouver in the evening. Though the return trip has to be a connection if I were to ski the departure day. Cathay, on the other hand, has a red eye direct on return. Some of you may have seen my “flight dilemma” thread earlier, and knew I opted for Cathay.

Then, I spent the last week sweating it out watching the corona virus turning the travel industry upside down in Asia. As Cathay is a Hong Kong based airline, not only was the virus a legitimate risk, there’s also the potential of cancelled flights due to quarantine restrictions.

I wasn’t completely over it until we landed in Vancouver and cleared Canadian immigration.

(I guess the stress must have gotten to me. I overslept last night and nearly miss the shuttle this morning!)

There’s still the risk of what might happen in 12 days time, when I need to fly back to NYC, again on Cathay. But that’s a smaller concern. And in the worse case, I bought an annual trip interruption insurance thanks to the advice from this forum, which would help defray any expense if I had to make alternative arrangement to get home.

It’s raining heavily in Vancouver. Unfortunately, the freezing level is at 2000m, which means it’s also raining in Whistler village. Worse, much of the lower and mid mountain too. Moreover, the upper mountain lifts are all on wind hold.

My lodging of choice, Blackcomb Spring, is the last stop on the shuttle. So it’ll be noon by the time I get there. But given the heavy rain, it’s not like I’ll miss any epic condition today.

At the front desk, another guest was doing his best to dissuade me from skiing at all, as the condition was pretty poor by his standard. At 12pm, there’s logic in that option. But, my room wasn’t ready and wouldn’t be till 4, the normal check-in time. That’s a long time to be waiting around. So I put on my best waterproof word rob and step out of door!

It wasn’t just a little drizzle. It’s proper RAIN. Big water droplets. But not too thick just yet. And Whistler has a bunch of gondolas which I intend to utilize to help keeping me stay dry longer. Except, the first gondola I approached, the Excalibur Express, was running extremely slow, and stopping a lot. (My lodging is half way up the slope from the Blackcomb base. So I start my day by skiing down to the gondola) So I decided to take the short beginner lift over to Whistler. To my delight, the Blackcomb gondola was running at normal speed. So up I went, off the gondola and jumped on Excelarator, the quad chair next to it. I couldn’t figure out why all the upper mountain lifts were on wind hold, as there’s absolutely no wind where I was. And I was approaching mid-mountain... but 20 yards before the top of the lift, I got my answer! Suddenly, the wind hit me right on the face, hard!!!

Well, no time to contemplate. I’m here to ski. Rain or not.

Visibility isn’t the greatest, with water droplets plastering on my goggle. But the snow was not bad. Though it wasn’t the cream cheese smooth I expect given the rain. So I lapped the quad a couple times and reconsidered. I was starting to get wet, which I know would at some point I would start to get cold. So I started down. Stopping at the mid-station of the Blacckcomb gondola, I saw some people were boarding the gondola to go up to the Rendezvous lodge. I followed. But then, the liftie came out and made a loud announcement “due to high wind, it’ll take 20 min to get to the top”. So I asked “is it worth it though?”, to which he answered “absolutely not!”. He then followed with more explanation. I didn’t need the explanation. It’s only my first day. I could wait for better weather, which was in the forecast anyway.

Down at Whistler base village, I popped in to visit the Extremely Canadian desk. But before that, I took off my gloves and rinse the water out of it. To my surprise, it held a good deal of water! A guy sitting by the door was amused by that sight, and shook his head in disbelieve! (The water came in from the cuff)

Had my first fall, in the hotel!

It annoys the hell out of me to see smooth hard surfaces in hotels catering to skiers. How many fell on those floors, I wonder.

Anyway, I’m signed up for the Extremely Canadian Steep clinic the next 2 days. Keeping my fingers crossed the upper mountain will be open. I’m hoping the clinic will show us some juicy lines in the alpine zone! Not to mention there should be some decent powder up there.

Not sure how to post picture any more. The button disappeared from the mobile version. Too bad, Monday was a blue bird powder day! 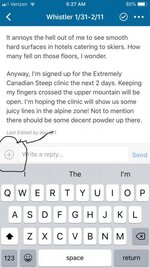 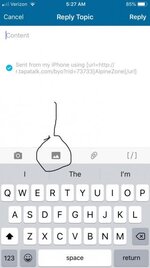 But, after that square, the pop up don’t show any “action” button!

Don’t know if you’re using an iPhone. On iOS, pressing the square shows your photos. Then you select one and it goes from there.
A

Sorry, I give up. don’t have time to fuss with it as a storm is coming in tonight.

This is going to be the end of the trip report. A very short one I’m afraid. Even though I’ll be here till next week.
A 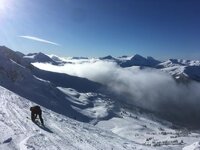 
Sent from my iPad using AlpineZone
A

Hike up from the top of t-bar: 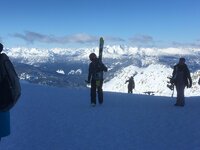 (another drop in spot) 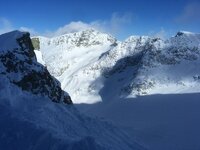 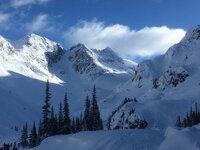 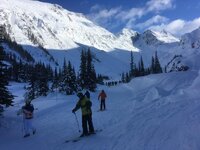 So far, all the pictures are from the easier lines. (7th Heaven, Blackcomb Glacier, Symphony/Harmony to come shortly)

When I did Spanky (Diamond bowl), clouds were so thick I couldn’t see the bottom of the line.

Pakalolo run was so foggy I could have sailed over the 2’ high crown line had it not for the helmet of the previous skier ahead of me looking strangely low. (We’ve been warned of the drop, but even standing 3’ from it, I couldn’t see it through the thick fog!)
You must log in or register to reply here.