Once again trying to beat the rain during this dreary winter I headed to Blue looking at a forecast of clouds and temp topping out at 40 with rain supposedly coming in later around 8, which I hoped would bring soft spring like conditions rebounding from the sun & warmth on Monday & Tuesday. Arrived late morning to a temp of 36 and overcast skies, eager to get going- but virtually the minute I stepped on the snow a light, constant rain started. It didn't deter anyone already there but it wasn't what I expected. My "rain resistant" jacket didn't soak through so I stayed out on this raw, cold afternoon determined to make the best of it. Blue's snowmakers as usual have done a very commendable job- all trails were open (except the trail "Coming Soon" which still hasn't arrived yet). Temps had dropped below freezing overnight and a dividing line formed halfway down the mountain- above it conditions consisted of frozen cord & frozen granular, and below it was loose granular & mashed potatoes (and gunk on Burma Road). ROTD went to Nightmare/Dreamweaver. Nightmare & the glades had the only bumps on the hill, which were rock hard. Barney must've taken his Bumps & gone home. There were a few rollers between the HSQ and the top of Paradise, which were fun. 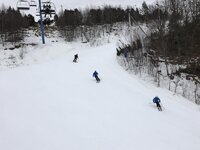 Nightmare ^
Sidewinder and Paradise tied for second. Razor's Edge, Challenge, Switchback, Main Street, Widowmaker, Chute, even Lazy Mile were as described above the dividing line, loosening up below it depending on the amount of traffic (think of the surface as Parmesan cheese getting grated by skier/riders' edges). The rain stopped after about an hour but not after coating my gogs, obscuring a clump of mashed potatoes at the bottom of Razorback & resulting in a nasty fall. I warmed up with some hot soup in the Valley Lodge which has been expanded even bigger this season, including a new location for their ski shop. Now dried out I felt much better after lunch. The frozen cord up top hadn't softened at all- ideal for practicing my pivot slips. Bob Ross showed up, in spirit at least: 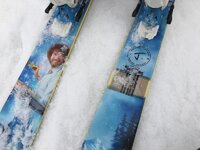 There's a rail park just below the Main Street double chair. At 4:30 the school groups rolled in & causing weekend type lines at the HSQ (the six-seater was inactive). Having gotten a ton of vertical in, I took a couple more runs & called it a day. Temp on departure was 37, having stayed constant all afternoon. Blue is closed today due to the rain storm.
J

I guess timing is everything with rain. I was there too but started earlier. I stopped for lunch as the rain started and got back on the slopes after it stopped. Never really had more than a couple of drops hit me.
You must log in or register to reply here.