Report: It's been almost exactly eight months since my last lift-served ski day. That was at Burke. The season ended abruptly because of you-know-what. While I managed to get in one earned-turns day in June, lift-served could not have come soon enough. Admittedly, with the pandemic and life, I was a little slow to get my things together but I am glad that I did.

As is typical for Brighton, the announcement came the evening before. Perhaps they do this to keep the crowds down. What was not typical was that they had FOUR lifts spinning with 16 runs groomed and open. Additionally, until Monday, it is passholders only. That was a nice gesture. There were some natural runs "open" or maybe not "clearly closed", but honestly, why would you right now with such little base? Brighton normally pushes to be the first to open and typically with Majestic and 2-3 runs, so having more at play was nice. The early snow and a recent cold snap allowed them to get more terrain open. I imagine that, like other places, they planned on opening more terrain to spread folks out.

This is my third season with a night pass. Last year I managed to get almost a third of my season at Brighton alone thanks to night skiing. It is fun and not expensive. This year they added a twist--no more "night" pass but instead a "Twilight Pass" that, for about $50 more, gives me unlimited skiing from 2pm to close everyday. On the hot July day when I called to renew, and use my credits, I was at best neutral with this change. It meant a slight price increase and I was not sure that I would "use" or "need" the added benefit. Well, my view has changed because instead of sitting on my couch watching Warren Miller I was instead sitting down on my first chair ride of the season at just after 2pm today. That $50 was money well invested since Brighton is the only game in town and my pass is now valid. No day tickets were for sale--passholders only. In the past, my night pass was not valid until night skiing started, which is usually Mid-December.

The parking lot, at this time of day, was fairly full, but I had no problem scoring rock star parking right by the lodge and the slope. Honestly, this is one of the perks of this pass since most folks (like me at Alta/Bird) want to start and end early. Though I renewed my pass online, it was a victim of the recent "Boyne Hack" and Brighton had to give me a new card. The lifties were kind enough to let me get in my first run before I stopped by the ticket office. Like other resorts, they were quick to give me a "temp" day ticket in exchange for my pass so that they could work through the issue. No time wasted.

First run was down Pacific Highway down to Snake Creek and then down Scout. It always amazes me how after so much time it comes back so naturally. Honestly, for a first day, I felt like I skied pretty well with no foot cramps, fatigue, or issues. The snow was decent--most spots were edge-to-edge coverage. There was ice in the usual places but I was able to deal with it.

After stopping by the ticket office, I was back up Crest Express to hit Thunder Road all the way to Snake Creek Express. Overall, it skied pretty well. The sides are very thin, but the main run was very well covered and edgeable.

Snake Creek was on auxiliary power but running almost full speed. There was rarely a line. I rode solo all day. Thanks, again, to the "new" benefit of skiing from 2-4pm, I was able to lap this lift for some nice runs. I alternated between Pioneer/Deer Park and Sunshine a few times, hitting the open runs (Thunder Road, Snake Creek Access, and some unnamed side trails) on the last section back to the lift. The Snake Creek, and upper reaches of Crest, have a solid 2 foot base of natural snow. The snow guns put the open runs into solid footing for this early in the season. Traffic, overall, was light for opening day but steady.

After spending an hour on Snake Creek, I closed my day out on Crest hitting Pacific Highway to Snowdrift to Mary Back/Lower Mary that was in decent shape. Snowdrift looked like it was in near midwinter condition. Lower Mary is very low. I closed out on Thunder Road to Hawkeye before swinging into the pass office to get my new pass.

A very satisfying outing. I booted up at the car and only hit the restrooms quickly, so no time inside. People all were skiing and riding in control (and quite well) and all were very considerate as to masking and social distancing. I felt very safe, compared to my last outing on the slopes when we were all scared to death about the Pandemic. 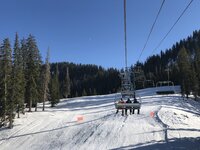 Looks like normal skiing. Normal is a really good thing this year