Today was a day out with my girlfriend and my Dad. This is my girl's second time skiing..

It was very cold today and turned out to be fairly windy at the top of Bromley. Fortunately the sun was shining and we had decided to ski at the Sun Mountain-- which the sun was shining on all day. From Bromley there is a view of Stratton and Magic which we could clearly see were getting a lot less direct sunlight compared to Bromley.

Snow was surprisingly good. They got maybe 6" yesterday and last night, and it skied like it. There were a few powder pockets to be found, it felt deeper than 6" of fresh in some places actually. Most of the terrain was packed powder. Real dry, cold snow. There were some paths skied through the trees, a couple of which I ventured into to find out the woods are overall not that far from being skiable. Snow at the top of the mountain was getting windblown on the west side, but all that snow was blowing over to the east side / Blue Ribbon Quad zone which varied from freshly groomed to soft powdery bumps.

It was a little too cold to go to the top every time. And I did mention it was my girlfriend's 2nd time skiing so took a lot of runs on the lower mountain lifts which more directly access the easy terrain.

Bromley has done an incredible job snowmaking and building up their base. They call their snowmaking operation Snowmaggedon and after today I'll call that a fair slogan. However I would imagine there was a lot of hardpack and ice before the snow yesterday. There were only a few icy spots to be found at Bromley today.

Fun day overall. Wish it wasn't so bitterly cold I would have stuck around longer. My girl did a great job on her 2nd day!

I will share the four photos we ended up taking.. 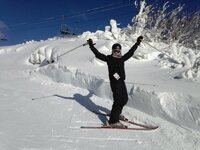 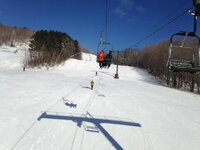 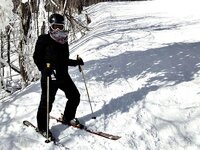 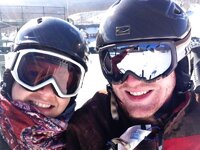 Sounds like a nice time. Glad your girl is getting into it.

Nice report and kudos to your GF for getting out there .She gets points for skiing during the Polar vortex:lol: Too. damn the weather guessers are beating that horse to death , when i was a kid we called it WINTER :flag:

Nice TR....and nice looking snow @Bromley. Might be a banner season for the mountain with these temps!...y/n?

May I suggest that you accompany your girlfriend to some private ski lessons! It could would out to a romantic weekend if you're in Morzine, Les Gets and Avoriaz and it's a great chance to brush up on your skills as well - refreshers are always good! Do find out about it, most ski instructors would be happy to do something special for the class since it's supposed to be a personalized session. http://www.theedgesnowsports.com
You must log in or register to reply here.