NEK Sundays are NEK fun days! I have not seen Burke any better this year! Even considering that it is a half day deal ($25) it turned out to be a great day after skiing Jay Peak the day before! The conditions were nearly perfect and between the two mountains we had a great weekend!

This time at Burke we parked at the Lower Burke Lodge since we planned on eating there once we were done. Obviously we started with the Sherburne Quade and headed over to the Mid Burke Express. Love this Quad! We arrived to the summit to experience freezing fog that builds up on our googles - more of a bother than anything else. We decided to head over to Powderhorn which was scrapped off last weekend, but on this day it was perfect! Carving was easy to do and the powder bumps made it fun. The fog made it a little tricky sometimes. Next we headed down Dear Run it is a very easy trail with lots of turns but really fun to crank hard turns on. We also made runs on Upper and Big Dipper, Dipper Doodle, Marshland, Mountain Marsh, Little Dipper and Boarderline on that part of the mountain. Lastly we headed for a longer run down Willoughby. This was almost treacherous due to the fog. Googles were freezing up and it was bumped out a little and since you could not see it was mystery meat skiing! I thought is was exciting in many respects. At the end of Willoughby we cranked in over to Enchanted Forest. Legs were on fire!

In an earlier report, I though it was slow but I was wrong! towards the end of the day we did about three runs in 30 minutes and we were sking the glades to skiers far left (not sure of the name). That is a very fun section to ski and I actually think it is out of bounds but it was fun in any case. We also skied the bike trail under the Sherburne Lift and did the bank turns and skied up the wooden bridge/ramp.

We retired to the Tamarack Grille for some great food and relaxation! It was a great Burke NEK Funday!

View from the ski in ski out hut off Big Dipper! 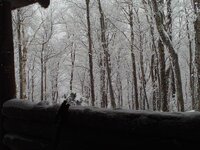 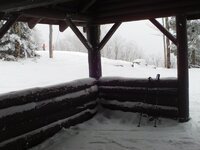 Nice! I miss my home mountain.
You must log in or register to reply here.