After a very underwhelming day at Black yesterday, I was excited to get back to one of my favorite eastern ski areas today. It had been 6 years since I was last at Cannon. Stayed in Lincoln last night so after a quick ride through a foggy Notch, was parked in the upper lot (2nd to last car in) at 8:50.

At the top of the stairs, I noticed a horde of people leaving the line for Peabody and they said it wasn't going to open right away. So I joined the small conga line heading towards Mittersill and figured I'd spend the beginning of the day there.

Upon arrival at Mittersill, I saw a rather long line formed at the base, but turns out most of it was racers who were heading up to stand around on Barons, so once they were up the line was gone. Started off with Skyline/Ridge Run/Taft which was groomed underneath 3" of fresh snow and was a beautiful velvety run. 2nd run I hit Idiot's Delight which showed that the natural stuff was skiing nicely. A touch of hardpack underneath the powder and occasional thin spots, but overall a nice run. The lifty said the Quad was open, so I took one more run down Upper Liftline and ducked into what I thought was Golden Birches, but turns out was just some unmarked glade that I happened to be the first one into. Such a sweet run and my first good long glade of the year. Unfortunately I never made it back over to Mittersill the rest of the day, but it's skiing great over there and I love the Castlerock vibes it gives off.

Back to the Cannon side, I headed straight for the summit and holy fog. The mix of dense fog and snowmaking on Profile was so strong that you couldn't see the chair in front of you almost the entire ride. I was also goggleless due to some early freezing drizzle, so you were really put into the white room. And what better way to break that room up than some trees? Hit Go Green first and it's in fantastic shape. Moved over to Global Warming next and was the very first into it (at 10:30?!?) which has a bit of a crappy overgrown spot in the middle but also very sweet otherwise. Even saw some huge animal tracks toward the bottom. They were padded feet, so wonder if a bear is running around in there. After picking my way down Upper Cannon in the pea soup, I made my way to Lost Boys and you guessed it...first one in. At 10:45. Went back for seconds and hopped in way early up Upper Cannon and it's just mint top to bottom in that area. It was starting to heavily graupel at that point which was filling in the few tracks in the woods, but also made life without goggles difficult so I headed in for a delicious bowl of Chili Mac at the summit while I thawed out.

After my early lunch and one more run in the woods off Cannon, I headed down Taft Slalom to Hardscrabble and ducked into Wicked Haahhd. It was my first time in this section of woods and it was a great steep glade. Coverage wasn't quite as good as the summit, but doable and one more storm will put it in business. Upon exit, Middle Hardscrabble was its usual boney self with some powder to the sides as well.

Decided to check out the front five. Took Bypass off the Quad and you know it's a great day at Cannon when Bypass is skiing really well with no ice...........lol just kidding it was boilerplate as usual, just with a frosting of powder this time. Does this trail ever not suck? Took Paulies down which had some slick spots and deep powder on the edges.

Spent about an hour on Zoomer, mainly bashing powder bumps on the Liftline trail. Some nice deep turns where the Liftline opens up in the middle stretch. Also checked out Lakeview Glade which was crap. Guess the trees down low need some more snow. Once i decided to head out of there I took a rare (for today) cruise down Lower Cannon which was perfect packed powder.

After picking my way down a rather disastrous Big Link (per usual) I headed up to play in the summit woods some more. Still finding fresh tracks everywhere up there and barely a soul to be found. Around 2:00 I hit the bar for a beer and was the only one in there. The bartender said it must be good skiing because he'd been lonely all day. I joked that it was more because it was so foggy that no one could find the lodge and I only found it because I blindly missed the first turn on Upper Cannon and almost smashed into the building.

Headed out for another run in the Upper Cannon woods and my day quickly came to a crashing end. I got a little too over confident in the woods and got my speed up a bit too much. I still have no idea what happened but I ended up yard saleing and came to rest 15 feet downhill with my right leg in a bit of discomfort. I gathered myself together for a couple minutes and then slowly began making my way through the rest of the glade. It wasn't too bad on my leg and I almost contemplated shaking it off and continuing to ski, but I decided I should be smart and head to the bottom. While skiing out the glade wasn't bad, for some reason my leg was in agony heading down the groomers to the bottom. This kind of frightened me and I very gingerly walked back to the car. I was able to put weight on it and it didn't hurt taking the boot off, but once I sat down it started throbbing and it hurt just to touch the brake pedal. I took some Advil and figured it was going to be a very long ride home, but after 15 minutes or so there was barely any discomfort while driving. Now that I'm home I'm limping a bit but it's not too bad and there's no swelling or bruising. I think I just sprained it pretty good but I was pretty scared when I finished that last run, especially with a Jackson trip in 17 days. Hopefully in a few days I'll be back to normal.

It killed me to have to quit an hour early on such an epic day, but it was the right move as this season is finally getting into gear and there was no reason to further aggravate the injury. Once I hit Lincoln on the ride home, the sun was fully out and just a reminder of how Franconia Notch seems to have its own special climate.

Not sure what's next at the moment. Was planning on Berkshire East on Sunday but with the leg injury I feel like I should give it more than 3 days even if it feels better. Take it as it comes I guess.

Glad to finally get back to Cannon which when it's fully open is one of the top 5 ski areas in New England IMO. Also glad to finally have a day that epic, it's been a couple years since an eastern mountain has been so good for me. If you were wondering if the woods are good at Cannon, wonder no more. Front five woods need more snow, but the summit and Mittersill woods are gorgeous.
B

Thanks for detailed review of the day at Cannon, one of my favorite NH mountains. I'm wishing you fast recovery.

Thanks Zand, great report. I'm looking forward to using an Indy day there tomorrow. Heal up!

Hey Zand thanks for another detailed report. Hope your leg feels better soon.

Excellent written report. Needs pics. I had to look up “graupel”. Best of luck with the leg, now I’m emotionally invested in you going west. I’ve known people who’ve cancelled ski trips because they’ve injured themselves skiing. That’s the worst.

Leg is a little sore but the more I walk on it the less sore it is. Consistent with past sprains. Thankful that it doesn't appear anything is torn. Chest and neck are real sore, definitely whiplashed myself when I went down. 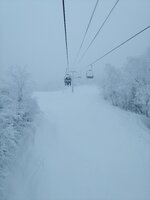 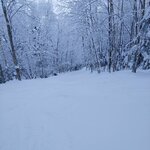 Idiot's Delight...youd have to be an idiot to not find delight on this run. 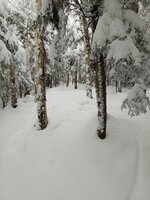 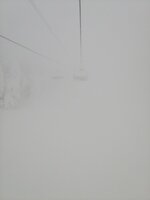 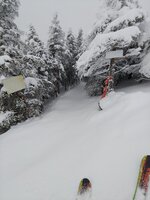 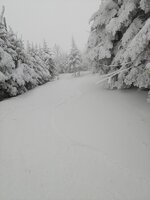 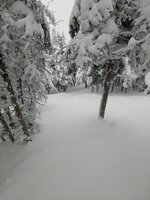 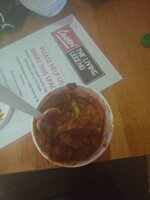 The chili mac at the summit is terrific! 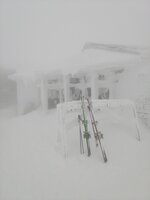 As long as you could find the lodge, that is. 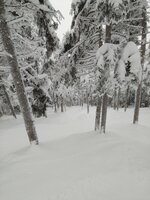 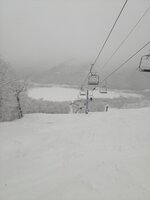 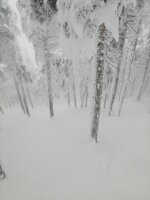 This was taken mere seconds before my "incident"...leaving this behind an hour early was tough to do but standing was also tough to do. Oh well.

Great pics. Surprised you got first tracks that late in the day. Never really liked GWG or LostBoys but some of their other glades are great.

Nice pics Zand
You must log in or register to reply here.