Conditions: Firm PP on top, soft corn snow lower mountain - clearly the base got very wet from rain and refroze causing scraping in some spots

Earlier in the week we were undecided about heading to Cannon for Saturday. However, on Saturday morning we woke to bluebird skies and we were about an hour away so we headed out. Around Lincoln we noticed low cloud cover on Cannon and the winds were picking up. We finally arrived at Cannon around 9:30 and noticed that a lot of snow melted since the previous Saturday. When we got there we also notice that the wind we felt earlier was nonexistent.

Obviously, we took the Peabody Chair up and about two thirds the way up it was pea soup and conditions firm. Visibility was not good so we skied down to the Front 5 looking for softer snow and took a few runs on Avalanche, Rocket, Pauli’s Folly and lastly Gary’s. Pauli’s had some nice soft bumps with it being a little scraped off in the troughs. Avalanche also had decent bumps at the top and bumps subsided part way down. My wife opted to ski Banshee coming off the upper section of Avalanche and said it was very crusty and teeth chattering. Rocket ended up being fairly scrapped off at the top but had pushed up corn snow bumps after that. Gary’s was perfect and great coverage where you could just let out and ski it fairly quickly. We decided to take an early lunch hoping the cloud coverage would burn off. Heading back, we skied down Parkway which last weekend had lots of fun jumps and rollers, this weekend it was a skating rink and it had been leveled, oddly I found it to be interesting to ski on still!

While eating lunch and having a couple Switchbacks, we headed back out. While we were in, Cannonball arrived and we met up to do some runs. He was gracious enough to ski with my family and friends. He was the pseudo guide in some respects for 7-8 runs! The cloud line was now higher and we all opted to head to the summit where we found mid-winter conditions. We ended up skiing Upper Ravine, a winding relatively narrow trail which was in very good condition, but due to visibility once again opted for the Front 5 and ended up skiing the others mentioned earlier as well as Zoomer. Zoomer bumps were widely spaced with scrapped off areas but it skied better than it looked. The tightest bumps were on Pauli’s. I was fun skiing with Cannonball even though he was snowboarding – won’t hold that against him. Probably made my son feel at home since he snowboards too! Cannonball – thanks for the turns!

After that round, my wife, two of our friends and I headed out for our last round where we went back to the Summit and skied Cannonball (run that is), Skylight and Upper Ravine before heading back down. The trails we skied were in great shape with winter like conditions. On our way back we skied Short Fuse to Lower Hardscrabble while Short Fuse was also very nice, Lower Hardscrabble was seeing it’s last days for sure at the very end we got to Turnpike it was the same with brown snow everywhere. Really did not want to go down that run out but there was no other choice.

Why do people complain about conditions this late in the season? We heard people saying that conditions sucked – What? Overall it was a pretty good day for $29! The conditions IMO were great for this time of year. Yes there were the icy patches from time to time and there were thin spots to contend with once and a while, but overall coverage was really good, there were lots of trails still open and the skis ran fast. The temps never really got out of the 30’s, if so then low 40’s at the base at best and it was overcast. There was even some sleet and snow at one point! We really enjoyed skiing with friends we met through The Ride and Ski Card events and another Azoner! We had two great days of skiing at Cannon this year (this trip and last weekend's near perfect day) and have grown to like the mountain and we find it to have a wide variety of terrain and we have not hit any glades yet or been to the Mittersill side! So next year we will be able to explore more!

Kudos to my wife for skiing down Avalanche and Pauli’s Folly! Now she has skied 4 of the Front 5. While I find them to be very inviting, to others those trails look more intimidating then they really are! That is the case with my wife. However she has been there done that in her book and that is all that counts – she continues building confidence.

What it looked like at the top of Peaboy lift 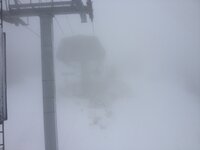 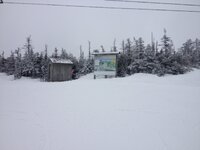 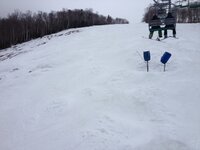 Avalanche from the bottom 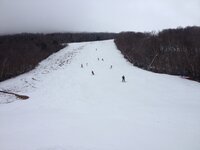 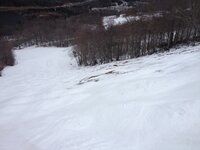 What a difference a day makes! It looks like full on winter season from the photos and even your description. Folks that complained were probably expecting Spring conditions like there was on Sunday. I only wish I took a photo of the moguls on Avalanche on Sunday for comparison. Deep troughs were dug out between the moguls and I for one really got worked. There were very few people on Avalanche compared to Cannonball on Sunday.

Cannonball was there both days, maybe he can do a comparison for us regarding bumps on Avalanche!

Why do people complain about conditions this late in the season?
Click to expand...

Definitely have to do with expectation.

I enjoyed it more on Friday when the sun was out. Also, compare to other areas I've skied in spring time, the blue ice patches were a bit disconcerting at first. Though they seem to have enough traction and can be skied just like any snowy surfaces.

I quite enjoyed my first visit to Cannon. I like the trails that twists and turns over the wide smooth avenues. On the other hand, the front 5, while challenging in their own way, wasn't my cup of tea. The bumps were irregular and have wide area of scraped off semi-boiler plate in between (I believe they might have groomed them, so the bumps weren't real bumps but just random pile of snow on a groomed surface). I prefer the bumps at Wildcat or Sunday River (Monday/free day). Perhaps the mid-winter bumps at Cannon are more typical bump fields?

dlague said:
Cannonball was there both days, maybe he can do a comparison for us regarding bumps on Avalanche!

The bumps on Sunday were sunnier than on Saturday!
You must log in or register to reply here.

Another Death at Cannon
2