My first day skiing out west

My first day skiing since March

100"+ of snow and locals calling it one of the best opening weekends in memory.

Jackson was supposed to open with a couple beginner lifts, Apres Vous, and I believe Casper. They ended up doing all that and Teton, Marmot, and the Birdger Gondola. The trail report says 31/113 trails open but it's a hellova lot more than that.

I got to the Ranch lot at 7:50am. Took the shuttle to the tram station and soaked it all in. Got my ticket, and walked to the Sweetwater Gondola at 8:15am. I was the first single in line. A moderate fog engulfed the base. It wasn't quiet but only a few dozen people were milling about at that time in the base. Today is finally the day I ski the West. 8:30am comes and I get a nod to walk through the gate. My damn RFID card isn't letting me in. The guy is telling me he's working on it, then he calls guest services to ask them what's up because his screen says my card isn't good til Monday, and he politely tells me that today's tickets are sold out and unless there's a glitch I'm SOL. It is a literal nightmare manifesting its self. I politely tell him I purchased Sat/Sun over the phone, and that my Monday ticket was an online purchase I made later on. Finally, after a couple minutes of tension, he gets the "all good" from the ticket window. I couldn't really speak from excitement but I thanked him and jogged through the lift maze to my cabin. Now I'm riding up and all the pent up excitement is crashing through my veins. I can't see out the windows due to fog and ice buildup but I'm trying my best to look through the little openings at the world I'm finally able to enter. I get off at the top and there's almost a sense of apprehension. I've waited a loooooong time for this moment, and here it is, and in the unlikeliest of circumstances. I get my skis on, make those first few awkward early season turns, and feel the euphoria rush through my veins as I travel down South Pass Traverse to Apres Vous.

I ride up Apres Vous, and that lift ends above the fog. I go off to the side of Upper Werner in a bit of powder and there's nothing to do but stare off into the Tetons above the sea of undercast. Another cliche, "here I am, soak it all up" moment. OK enough with the emotional gibbering, the skiing was pretty damn amazing. Several moments stand out....one of my early runs was down an ungroomed Kremmerer with small moguls. I saw it from the lift and it looked slick with loose snow on the tops of the bumps. Well, I guess that's what my EC eyes were doing to me....it was true "packed powder". While it looked like thaw/freeze it was so edgable I could've ripped GS turns down the trail. It set the tone for the day of discovery. Later I went to the Marmot Double chair. There were three steep, kinda short chutes off that chair that I lapped. They skied fantastic. Gulley skiing. I couldn't find a damn name for them on the map. Turns out there is no name. If you see it, ski it I guess. I don't know what I'd call it as it's not hidden, it's not really sidecountry. It's in-your-face, just unnamed. I guess they'd have over 250 trails if they named each patch of skiable snow. I really liked the terrain under the Bridger gondola. It reminded me of East Coast liftline skiing. Later I found more unmarked stuff that was maybe 300-500 vertical feet (tough to judge out there) but some of the steepest skiing I've ever done. That was over by Casper.

Primary conditions off-trail were chopped pow. Trails themselves were true-to-form packed powder with some scratch developing later in the day. Oddly enough groomers were hit-or-miss. A couple skied well while others were terrible. I was telling people on the lift, "save for a powder day, this would be one of the best days of the year on the East Coast". The locals, too, were largely impressed by the conditions, the amount of terrain open, and the coverage. Even the high alpine Thunder Quad was spinning all day for patrol, and avi work was being done over there all day (the first explosion scared the shit out of me lol). Maybe it opens for tomorrow or Monday? I have no idea the timeline of this stuff. One local told me I have a slight chance of riding the tram by Monday which I think is a bit ridiculous but the opening day lineup of lifts/terrain was doubled over what was announced so who knows?

My first day of West Coast skiing, and many many many more to come. I'm as happy as ever right now, as I right this from the famous Hostel here at the base...unfortunately the wifi sucks or I'd post a lot of crazy pictures (for November)

Looking across the Tetons over the sea of morning fog 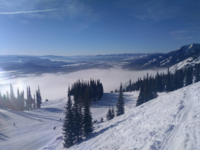 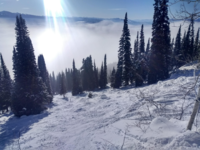 A steep, unnamed chute in the alpine 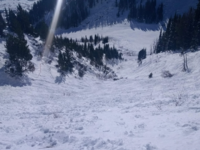 Looks great. Happy for you. I remember my first trip to ski in the west, on college spring break 1976. It is a mind blowing experience and I fully understand your emotional gibbering.

There's some excellent skiing on that part of the mtn, but "you ain't seen nothing yet" at Jackson until you ski Marmot & Sublette chairs and the Tram.
Stay safe.

Great pics and TR. Amazing to have all of that skiing available in late November. Sooo jealous. . .
You must log in or register to reply here.