Another great day at Jay Peak! We were there last weekend and though the conditions were awesome and then they got more snow! Last weekend we skied there on Sunday (fewer people) but on Saturdays you have to get there early if you want the powder! In addition, Saturdays lift lines for the Jet Triple, Tram and Flyer were rather long, but Bonnie was always perfect! Many of the glades like Everglade and Beaver Pond were well traveled by the time we got there, but still very nice since the snow was still soft! The only real issue that day was the FOG! Incidentally we skied Burke the next day and experienced fog there too!

We started our day heading up the Metro Quad then over to the Bonaventure Quad. When we got off the lift it was pea soup! Basically, turns were being made literally by looking ten to fifteen feet ahead of you! Made for interesting runs. Once below the fog line, the visibility was great! All trails like Angel's Wiggle, Derick Hot Shot, Montrealer, Uller's Dream, Cam Am, Hell's Crossing, River Quai, Exibition all skied really nice, Sure there were powder bumps but that made for nice opportunities to catch a little air here and there!

When we went up Flyer, it was windy above Aligator Alley so we stuck to Bonnie for most of the day! However we did head into the Beaver Pond Glades which skied like butter ) silky smooth snow!

Our kids went to the Pump House to chill out afterwards while we hit the Drink over there then headed for a rocking good time in the International Room for the Ride and Ski Party! The band was awesome and there were tons of great giveaways!

Another day of complete satisfaction at Jay Peak! 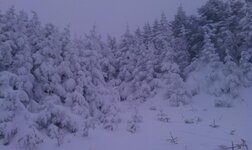 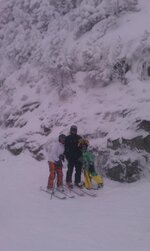 Yeah, it was a pretty awesome day. At least I didn't get frost bite on the Flyer like the last time.

I got to do Jay, one dU. Great reports.
You must log in or register to reply here.