Typical morning of me turning off my alarm instead of hitting snooze had me heading up late, but finally got on skis shortly before 11. I was surprised to see the lots very full when I arrived, ended up having to park in the Vale lot, which is mostly fine as it's as short of a walk as you can make, but means you have to start at Rams Head. After waiting in the mess of a line at the Quad (they weren't using the corral for some reason, and it was maybe 25 chairs long but a total free for all) and fighting through the masses on Caper, I started off with a pair of runs off the Bubble. First was Vagabond which might've been my favorite trail of the day. It's a bit overgrown compared to most of the rest of the trails, so less traffic made for super soft snow and much less rocks/ice being struck. Followed that up with Northstar which I thought was kind of crummy... definitely has had a lot more traffic than Vagabond resulting in harder bumps and a lot more debris to run over. 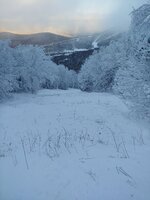 After the Northstar run, came to the base to find the line for the Bubble being dumped and a mass of people heading to Rams Head. I joined the Great Northern Chinese Downhill event and after finally getting out of Rams Head, found that they had fired up the Snowdon Triple while the Bubble was down. I hopped on for a midstation lap on Conclusion. I always love doing hot laps on that run when it is good, and it was a lot of fun today with lots of soft snow mixed with a few gnarly spots. By the time I got to the bottom they had already reopened the Bubble and stopped loading the Triple. Pretty awesome that they scrambled to fire up the Triple even though it was only needed for like 45 minutes. 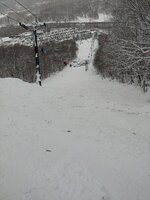 Took a couple Peak laps off the K1, first hitting Catwalk from the stairs which has some very good coverage. Always love the quiet moment of zen at the top (besides myself catching my breath because I'm an out of shape fatass) before descending the trail there. Continued down Downdraft which was roped halfway and wasn't too good, but got dumped onto Cascade which was in better shape. Between Stratton Saturday and K today, I've found that I'm fond of skiing trails early season that are usually groomers but currently ungroomed natural only. Next was the Light which had very few customers allowing for some fresh tracks in the 4" or so that fell overnight. Took that down to Flume which was in nice shape. I usually hate the Flume runout but (for now) it hasn't developed that luge track at the bottom yet. 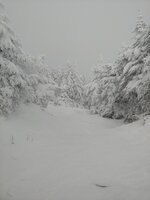 Headed over to Skye, first coming back down Superstar which was a sheet of ice on the headwall, but then was mostly good packed powder the rest of the way save for a few slick spots. Some pockets of powder on the sides as well. Headed back into Needles for a few runs. Panic Button was very skied out and not very fun...lots of exposed rock right now. Cut over to the 2nd half of Vertigo which was alright...not the softest trail I skied today but good enough. Did Needles top to bottom next, the first narrow part had some frankensnow underneath which was frozen solid and not fun, but once the trail opened up under the Skyeship line it was all natural. The whole right side was like a playground...super soft snow, lots of waterbars to jump out of. Finished up with a Stitchline run, not the steepest liftline in the world but with the thin cover navigating the rocks was a fun time. Reminded me of the Berkshire East liftline trail with thin cover. 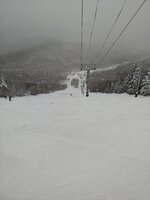 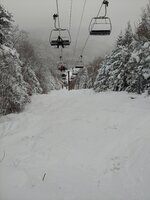 Took Northbrook out in order to avoid the masses on Bittersweet, then hit Old Superstar which was kind of disappointing. Was hoping for snow similar to Vagabond. Usually this trail has good cover and is soft, but it skied more like Northstar with the solid bumps. Wanted to ski Lower O but they had roped it at that point, so the steep pitch must've really gotten blown out.

Had a quick and stupid expensive lunch in the new lodge (I don't like the place...I know they had to do it but I was always partial to KBL and now they have some sterile building that looks like an office building) before a Light/Cascade repeat. Wish Canyon was spinning as I would've done more laps in there, but packing into the Gondy like sardines gets old after a few runs. 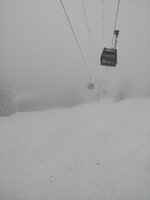 Spent the last hour at Snowdon, first hitting Easy Rider which was really really good. The coverage was way better than I expected and there were lots of fresh lines from last night's snow. I took a run down near Patsy's later which was very ugly in comparison. Lots of blown out lines, rocks, roots, etc. Great Bear seemed very deep, which is strange because I don't think they blew snow here yet. It was good and soft like Vagabond, but seemed much deeper. Did reruns on both of those to close out the day. 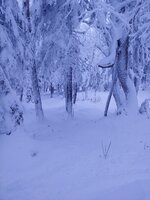 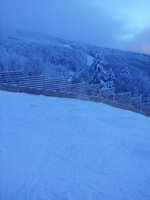 Glad to have gotten out once more before the Grinch Storm locks all the natural up for the foreseeable future. Might have been my last day out before the New Year, but it was awesome to get two really good days in before Christmas. Get up there tomorrow and Thursday if you can before it's back to groomers only.
Last edited: Dec 20, 2022
You must log in or register to reply here.