Posted the 1/13 Solitude already, here's the other 3 days.

After an okay first day at Solitude, I was really looking forward to checking out Snowbird. Arrived at about 8:55 to a dead Gad base area, parked right by the bridge, and was on 3rd chair. A cold wind was blowing right down the line and the sun had yet to rise above Hidden Peak, so went right over to Mineral Basin which felt like spring in comparison. The majority of the ungroomed stuff was frozen solid and didn't get any softer through the day, save for a couple areas that were completely sheltered from the sun which skied much better. The groomers had a spring softness to them in the sun. The whole area seems like it would be a blast on a powder day or in the spring, there's just so much territory to explore and plenty of room to move around. But with the tough conditions, things were very hit or miss that day.

Spent a lot of time on the Little Cloud lift as there were some great lines just past the first gate at the end of Road to Provo where the shadow of the mountain shades the area the whole day. Later in the day, those lines had some loose snow drift in from above which made them even sweeter and even powdery. Other than that, most of the skiing was very tough off that lift too with breakable crust or flat out slick hardpack in higher traffic areas. Took a couple runs off Gad 2 but didn't really find anything in good shape over there.

Barely spent any time on the Peruvian side of the resort. Took one run down mid-Cirque which featured an absolutely miserable traverse over mainly rocks and occasionally some rock-filled snow. Thought the snow on the tram side of the cirque would be good with it facing north, but unfortunately it was all crusted over like the rest of the mountain. Rode the quad once just to experience the carpet through the mountain to Mineral Basin. Cool experience with the historical artifacts, but the wind was blowing directly into the tunnel and made for quite the cold ride.

Skied pretty hard all day, mainly alternating between a nice soft line I found in Mineral Basin and the nice lines past Road to Provo. Snowbird has some absolutely insane looking terrain that I very much look forward to skiing if I catch it with better conditions. Just wasn't worth getting hurt in the crusty conditions so stuck to the mellower but fun things I seeked out.

Going into the trip I had absolutely no intention of skiing Deer Valley as I figured there'd be no way I'd get away from Alta and Snowbird especially for an area built for people with money who love groomers and fur coats. But with the conditions making a lot of the terrain unskiable, I figured there'd be no better time to go try the Deer Valley experience. And well, I gotta say, I actually kind of ended up liking the place. It's impossible to figure out their trail map until you're actually there and see it in person to make some sense of it. But once I figured out which way was up and which way was down I started seeking out some pretty good stuff.

Arrived just after 9 and parked in the 2nd terrace next to a lady who complained that it was too cold to ski that day (26 degrees, light snow...or you know, 50 degrees warmer than Vermont will be Monday). Made my way through the lodge to Carpenter lift, passing many nice staff who said good morning and asked if I needed any help with anything. Quickly started realizing that it was more of a Bretton Woods-wealthy place rather than a Stratton-wealthy place. The lodges were absolutely gorgeous and I don't think I ran into anyone that wasn't totally friendly. The $859 a night St. Regis on the hill was probably a little out of my range though.

Headed to Bald Mountain first, which had more of the stuff I'd been experiencing all week - lots of crust and hardpack in the heavy traffic areas. Woods looked beautiful but almost impossible to turn. I could've spent weeks skiing in those well spaced aspens with good snow. But unfortunately, kept having to bail out to the groomers and decided to head elsewhere.

Ended up at Lady Morgan and skied Centennial which was short but finally some nice soft snow. Kind of a pain in the ass runout, but worth the beautiful conditions up top. Next door, Empire Canyon was the place to be. Daly Bowl and Chutes were just absolutely soft and wonderful. Lady Morgan bowl also terrific. The stuff that came down the other direction under the lift was in complete crap shape. Amazing how bad things can be with a little sun. Had lunch in the Empire Lodge which was amazing (and somehow cheaper than a slice of pizza and bottle of water at Winter Park).

Hit Daly Bowl a couple more times before heading back towards Bald Mountain. Hit Sunset Glade which was nice and soft up top. Not sure if I missed a sign or something, but ended up in no-mans-land further down which required some bushwacking to get back to the base but at least the snow was still soft. It started snowing pretty hard at that point, so went to try Triangle Trees which were good at first but just got way too crusty lower and kept catching my skis mid turn.

Ended the day with a few groomers and headed out pleasantly surprised with how enjoyable the day was. Went in with low expectations and expecting a Stratton-like atmosphere, but like a Bretton Woods or an Okemo, it was more laid back than expected and had a lot of fun stuff. While I probably wouldn't go there if Alta and Snowbird were primo, I certainly will again if I catch another tough-conditions week.

There was rumblings of a little snow event coming in on Tuesday Night and as the week went along, it kept looking a little stronger. The evening before was showing forecasts of 4-8" by Wednesday afternoon. Woke up Wednesday morning and the report was saying 8". Blasted on up LCC and arrived just before 9 to a good sized crowd waiting for Collins to open. I opted to get in the shorter line for Wildcat and after a 20 minute delayed opening, was on the 11th chair.

As soon as my skis hit the snow up top, it was evident that the report of 8" was taken down low because there was easily 15"+ and still pounding snow! I only had 4 hours until I had to leave for the airport, so instead of trying to plan out the day, I ignored maps and signs and just skied like hell for 4 straight hours. Moved over to Sugarloaf which was even deeper and had some fun drops. Then to Supreme in which at noon I found some untouched thigh deep chutes which were just so sick. Such an awesome 4 hours and glad I got one amazing day in before I had to leave (and just missed 2-3 feet by one day). Loved the atmosphere of the place and it's even better when everyone is psyched to catch a sleeper powder day. There was a lot of stuff roped for avy control which looked awesome and I can't wait to go back and ski that stuff some other time.


Overall, a very fun four days with a hell of an ending. I loved how easy and cheap it is to do a Utah trip, much better than doing the jaunt than Colorado. I loved it there too and will try to get back every few years, but Utah is going to be a yearly event. Gotta give a shout out to the Super 8 in Midvale, way too nice to be a Super 8 and with it's location and it being $50 a night, you won't get a better deal in ski country. SLC Airport was a breeze and had the nicest TSA in the country. Most amazing thing was coming down from 15" of snow at Alta and 20 minutes later stopping for lunch in 48 degree and sunny weather in Cottonwood Heights. I can see why everyone is moving there.

Speaking of snowstorms, ready to eat some more powder Monday and Tuesday (albeit in much much colder temperatures) somewhere in VT. Thinking MRV trip but will chase the jackpot and least windholds.
M

I thought I would not like DV as well until we found the Daley chutes. And it was so empty ...Not a bad place to spend a day.
As far as Alta is concerned, you need to hook up with those that know..they will show you the good stuff that a map will not. 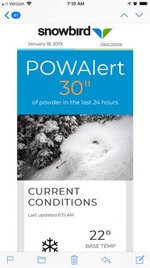 That's snorkel deep..... I bet the cirque and mineral basin as sweet now!

Sounds like a lot of windholds today...road closures this morning and probably a zoo now. I'm happy with Wednesday and then what's coming here in 2 days.

Zand said:
Sounds like a lot of windholds today...road closures this morning and probably a zoo now. I'm happy with Wednesday and then what's coming here in 2 days.
Click to expand...

Funny how that "morning before the flight home" is often the jackpot day on a western trip. I've had that happen too so always try not to have an early flight home.

speden said:
Funny how that "morning before the flight home" is often the jackpot day on a western trip. I've had that happen too so always try not to have an early flight home.
Click to expand...

speden said:
Funny how that "morning before the flight home" is often the jackpot day on a western trip. I've had that happen too so always try not to have an early flight home.
Click to expand...

But still better than jackpot the day after the evening flight home. lol
You must log in or register to reply here.