Decided to take a half day to hit up Waterville on a Friday. The temps were in the upper thirties to lower forties and the sun was out which made for a great afternoon. Since I was skiing solo, I never had to stop to wait for others and the lifts were ski on and ski off which really worked the legs – by the time the skiing was done I had earned my beer! Overall the mountain is still 100% covered and they close this Monday 4/7.

My focus was strictly on advanced terrain and as I said in another trip report, that is pretty easy to do at Waterville. Effectively, I skied True Grit, Gema and Ciao on the Skiers right of White Peak Express and Utter Abandon, Upper/Lowers Sel’s Choice, The Boneyard and The Chute on skiers left of White Peak Express and the connecting blue trails which I will not list. Every single trail skied great. Even though the conditions looked and felt soft, skiing remained fast. With snow being pushed around, I found my skis floating up on top of the wet powder like crud which made it a rough ride once and a while but lots of fun! The best bumps were on The Boneyard where they remained hard with a touch of softer snow on the uphill side. That area remains shaded and keeps the snow harder and in some cases frozen. Bumps on The Chute were soft and skied pretty good where the bumps on the side of True Grit felt so soft that I kept catching an edge. I did try the woods off True Grit and I kept experiencing a weird sinking feeling where it was not packed down and decide to get out.

A couple honorable mentions to two blue trails – Tippeconoe, And Tyler Too! Both of those trails are just plain fin to cruise on. They are wide and you can let it rip! On my last run I too Short Cut over to Periphery then to The Boneyard and that combo was nice since the first two trails have that narrow New England type of feel. Because of the shade that trail at 3:30 was still nice and crisp with a mid-winter feel!

Sometimes it is just fun to spend some time skiing alone – not to mention cranking out a bunch of runs on a HSQ. Only bad thing, beer selection – out of Harpoon, and Tuckerman had to settle for Sam Adams!

There are like counted six trails in that summit? 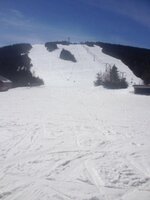 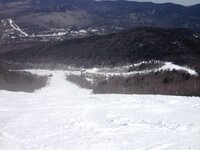 Looking at the two parts of Psyched Out 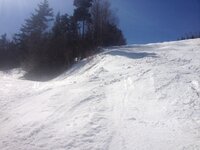 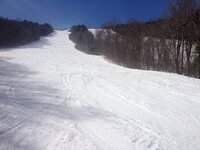 Nice shiny bumps in The Boneyard 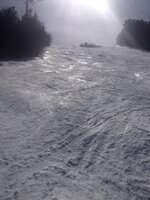 This is the first year in countless that I haven't made it to Waterville. Thanks for the memories!
You must log in or register to reply here.