Whaleback 2-17-20 could have been better

Should be awesome tomorrow. Drove by today on my way to Montpelier for work the next couple of days. Snow was piling up for sure. If I can somehow finish work early on Thursday, I might try to swing in for final two hours that afternoon.

I've been wanting to ski the Whale for many years now..especially under the lights. The access to the hill just off the interstate couldn't make it easier..I've got a bag of excuses for mis-hitting but times due. A buddy just moved to West Leb and loves skiing it and the proximity to.

As long as DHS posted that one picture that makes Whaleback steeps look like Rambo at Crested Butte -- he did the mountain a favor even with whatever criticism. I basically glossed over the criticism, #1 I usually pass on beer while skiing, #2 a picture is worth 1000 words and that is a nice moguly fall line!


deadheadskier said:
Should be awesome tomorrow. Drove by today on my way to Montpelier for work the next couple of days. Snow was piling up for sure. If I can somehow finish work early on Thursday, I might try to swing in for final two hours that afternoon
Click to expand...

I was thinking that on the way up I-91 , so much snow even at zero elevation, even Whaleback must be getting a nice hit!

Yes, all publicity is good. The Whale has great terrain. Certainly worth a stop on your way by. This mountain deserves support.

For some reason I can't find any pictures of Jawbone (skier's left of the lift line "The Face") or Blowhole (skier's right of the liftline) but all 3 are steep (and bumped) by any standard. They have an the IFSA (International Freeskiers and Snowboarders Association) every year which is cool because their only other East Coast stops are Magic, Jay, Smuggs, etc so they like the terrain enough to bring the tour there. 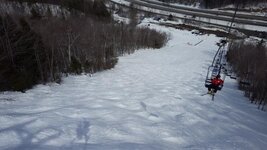 Jawbone is what I have pictured above. And yup, it, Blowhole and Face are all legit steep bump runs.

deadheadskier said:
Very enjoyable skiing. Head in at noon for a bite to eat. Bar is closed. At noon. On a holiday. I grab some food from the cafeteria. There are a few others milling about upstairs at the bar perplexed it's not open. While eating I see on Facebook the mountain boasting 28/30 trails open (not the case) and no lines. Kinda lame to over report what's available, but whatever.

Eventually a bartender shows up and opens at 12:30. The few people waiting grab their beers. I overhear a conversation of a couple at the bar. They say they're MRV skiers who live in Boston. Had a condo up there for 20 years and ski both Suragarbush and Mad River. In all that time they had never stopped to ski at WB and decided to finally give it a shot and avoid crowds on the way home.

I couldn't help but think they probably would love the Face and Blowhole if they skied MRG frequently. If they experienced those trails, perhaps they'd become regular WB customers on the way to or from Boston when the snow was good.

I see no reason those trails were closed. Whalebacks expert terrain has enough natural to open so I frequently they really ought to error on the side of being too aggressive with opening on thin cover. The people who seek out that type of terrain won't mind.

After lunch I went back to enjoy what I could. After two runs ski patrol roped off the previously mentioned Jawbone. WTF? Look at the above picture and tell me it should be closed.

End of the day, this could have been an A- Presidents day experience that I would gloat about and tell the world to keep an eye on WB conditions. Turned out to be C+ because they roped a bunch of stuff they shouldn't have and to lesser extent can't offer a beer before 12:30PM for the dad's like me in a hall pass that might want one. And the latter is clearly not a labor cost issue. They had all four lifts open today! Not sure why the T Bar would ever be open except for when the double can't operate.

Feel a little bad posting "bad" trip reports like this, especially with the small independent places I love. Maybe someone who works there reads it constructively and aspires to run it better.

Wow. Something seems wrong there. Sorry to hear that. 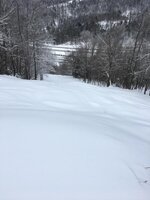 Does Whaleback still have that early morning skin-ski crowd? I think it was on Thursday mornings?

The dawn patrol seems to be there every morning this year, and again after close. Perhaps because it was the only hill in the area with skiiable snow on it until the past few weeks.
You must log in or register to reply here.