Why Ski Resorts Are Dying

This video is an absolute mess of errors, combined with shoehorned left-wing political claims stuffed into what's ostensibly a ski industry demographics video.

Video Claim: US Skier visits are back to where they were 30 years ago!


I have no idea where "annoying Millennial girl" (aka the narrator) gets her data, mine is directly from NSAA. On the second claim, she does say "skiers", which would omit snowboarders, but I still dont think that math works even if she did omit snowboarders, and even if so, it's dumb to report on "ski resort" health if you're omitting all snowboarder dollars. What makes this even more confusing is later in the video, she quotes "average skier age" directly from NSAA, so it's not like she isnt aware that data source exists given she literally sourced it. Then at another point in the video she confused total skiers with total skier visits, and claims Global Warming is currently badly hurting the US ski industry, which is absurd.

A video that has numerous factual errors in the first few minutes loses a lot of credibility...

1) They cited skier participation as being down 11% "last year" yet the source they reference for that stat is an article from 2014. In reality (based on NSAA data), last year was the highest "active participant" year in quite some time (http://www.nsaa.org/media/378733/participants2019.pdf)

3) The "graph" they use to show the above data is just very inaccurate.

4) At around 3 minutes in they state in 2016 that "20 million people went skiing". That number makes zero sense. Skier participation has fluctuated between roughly 8 and 10 million for quite some time. Skier visits haven't been below 50M since 1990. So where does 20 million come from? The source they credit is a Powder article that says 20 million people went skiing, snowboarding AND SNOWMOBILING that year. Do that many people really snowmobile? At any rate, they need to learn to use 1 source of data and stick with it.

Despite all the errors, Millennial girl's horrifically affected voice was the worst part of that video.

Oh, but it gets worse.

You know the opening minute of the video which looks like it's shot on some alternate dystopian world after a nuclear fallout to show how badly "ski resorts" are declining in America?

I looked it up because Millennial girl said it's in New York, so I was shocked I'd never heard of a ski resort so close to home. Anyway, this "ski resort" had ONE trail. Really. The whole thing is intentionally deceptive from the first second.
A

I know people are generally clueless and easy to fool. I guess this proved that point?

But to be brutally honest, I did not bother checking the validity of the numbers offered here either. That means if enough lie here, you would probably got me!

Lots of little places have closed over the years. See NELSAP.

Off the top of my head saddleback and balsams have been lost since the turn on the century. Ascutney and haystack are special cases, the former largely but not entirely lost, the later likely to return. We have regained crotched and arguably mittersill.

King Ridge was a real favorite of mine as a little boy. As my parents and I were learning it was our most visited area when I was 8/9.

Nevele? My driveway has more vertical. Its been abandoned over a decade. It should have been closed the day after it was built, the ugly pos. She couldn't find a better example? Gee..Tom's Ski Tow closed in 1986..Must be the industry is dying. 20 years from now there will be another annoying broad saying the same exact thing and we'll still be waiting in 15 minute lift lines.

This was interesting for a few minutes until they went all Greta Thunberg on me.

bdfreetuna said:
This was interesting for a few minutes until they went all Greta Thunberg on me.
Click to expand...

The video is filled with errors intentionally making the ski industry sound 100x worse off than it really is even before it got all......... 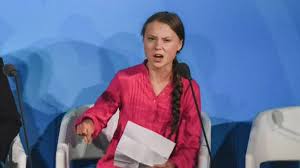 HOW DARE YOU let a mountain with 100' vertical close!

she mispronounced the nevele. and the nevele wasnt a ski resort. it was a 4 seasons catskills borscht belt place and its decline was because of the overall decline of the catskills resorts. nothing to do w ski economics.

Speaking of Win's segment in the video, it was confusing how he described skier visits as "flat" when the video appeared to argue quite a steep decline. Euphemistic language?

I was not really aware skier visits were down 25-30% or whatever the exact figure they said since 80's-90s.

Skiing is so much better than it was then too. Let's be real, the snowmaking, grooming and available tree skiing... along with improvements in skis themselves, going back to the "hey days" would be a real setback except financially.

Here's the data. Skier visits are not down, they are flat with wobble. You can also look at Northeast numbers, or just Vermont. Still the same. 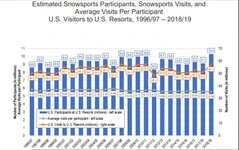 bdfreetuna said:
Speaking of Win's segment in the video, it was confusing how he described skier visits as "flat" when the video appeared to argue quite a steep decline. Euphemistic language?

I was not really aware skier visits were down 25-30% or whatever the exact figure they said since 80's-90s.

Skiing is so much better than it was then too. Let's be real, the snowmaking, grooming and available tree skiing... along with improvements in skis themselves, going back to the "hey days" would be a real setback except financially.
Click to expand...

In terms of skier participation, NSAA only shows the mid 90s through current. During that time the number was between 8.3M and 10.3M. (and both that high and low point was in the 2010s). If you graphed a trend line through the data, it would essentially be flat.

So just a total fail in terms of presenting accurate data on any topic by Skier Thunberg.

It appears that skier visits and participants are slightly growing if you adjust for "bad snow years" (and even then still slightly). I take it as good news!

Can you explain why the video presenter thought visits and skiers were in suck steep decline though? I'm not about to watch it again and check her sources so this is a lazy question I suppose.
You must log in or register to reply here.

The business of ski resorts