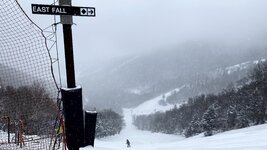 Ride of the early morning (and first run) was Bittersweet, which ended up with an unfair share of the 2” or so overnight blown over its corduroy. Second run: Superstar, which I regretted. It was mostly a block of ice thanks to recent events. There was a little sort-of-soft, chopped-up stuff on skiers right. Towards the bottom the wind was blowing what powder there was into my face reducing visibility to nil.

Around noon the snow shifted from flurries to something more serious, and everything improved from there right until the end. From 2:00 onwards it was “free refills” kinda snow. Also, the wind calmed down and the few lifts that had been on hold in the Needle’s Eye area started spinning. Ride of the afternoon was lower East Fall. Honorable mention to Cascade, which was great until the lower third (of the steep part before the runout). And Superstar late turned out pretty nice, too. 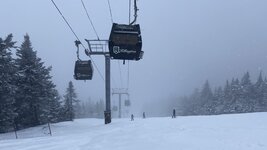