What's your best memory from last winter that's kept you psyched for skiing during the off-season? Thought this would be a good topic as the next ski season ain't far away now!
Usually for me it's something good that happened on my last ski day or nearly last ski day: 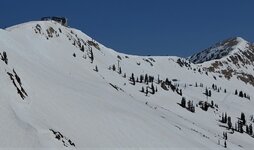 Doesn't look like much, but... For about two incredible hours this morning I had some of the best spring snow conditions of my life! I thought it was some form of magical corn snow, but a person I rode the chair with (a former Snowbird groomer driver) said, "no." It was too fresh, hadn't gone through enough freeze/thaw cycles to be corn. This part of the mtn had not been open/skied for five days and in the intervening time a couple of little 2" snows had taken place. What I skied this morning was basically soft supportable snow, about 2" of super carve-able velvet over a smooth supportable surface underneath. The entire wide expanse of Mineral Basin from edge to edge had this velvety smooth surface, untouched by human feet for 5 days. It was like the whole place had been groomed and covered with a couple inches of spring snow. It was about the easiest all the offpiste in the basin will ever ski! I made 7 or 8 runs underneath and around the liftline in this photo and since it was a non-powder Friday in May there weren't many people on the mtn. Mindless, carefree swoops through gullies, flying over shoulders, I felt like a human sports car. It was sooo good I was hyperventilating on some of the runs. After about 1045 AM it turned mostly to mush, but those two hours were a heck of a memory to carry me through the summer of 2022!

WHAT SORT OF SKI MEMORIES KEPT YOU FIRED UP THIS OFF-SEASON?
1

After Icecoast conditions at BS in early March a 2 day got cut short for a 5 hour drive thru dark snowy northern Yellowstone to Grand Targhee that had 2" of dust on crust. Cut out at 2 PM for another. 5-6 hour drive to Big and Little Cottonwoods. Next 6 days had 39" of light and dry to finish out the 9 day tour. 4 bottles of Glenrothes Single Malt 12 year to enhance the evening film sessions . . . last pic was Bird skiers far lower left - small 700-800? or so vertical on powder morning where no one was - fresh tracks on 7-8 laps.

Tough one, but first thing that came to mind was 18 inches at the recently resurrected Saddleback. Such a great place!

Close 2nd, finally making it to Crystal on my 5th attempt. Had a good foot of fresh snow there, great day!
G

Best memory was probably a last-minute planned ski day at Killington during school April vacation with my youngest. Temps ended up being perfect (not too warm but warm enough that the bumps got soft). We skied laps in the Canyon over and over. Cascade and Downdraft were about as good as they get - the rest of the mountain skied great too but those two runs stood out. Just a great unexpected day.

Switzerland with the TGR Euro-BBI crew. 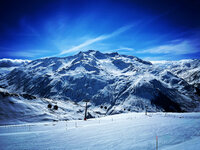 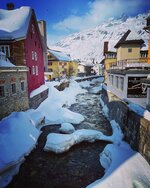 I had a couple days at Powderhorn with several feet of snow and not a lot of people to track it up. Think that first hour on a powder day and extend it for 2 days.
R

I got out one morning with a local photographer the first day the sun popped after the big Christmas/New Years storm cycle. The snow sucked! The whole mountain was wind fucked and the skiing was stupidly challenging with lots of breakable and drifts scattered about. We managed to find this one spot though that was sheltered enough that the snow was sparred from the wind and actually loaded with fresh powder that was also lit up with the morning sun. I hiked up this little hidden pocket probably five or six times before it started to look tracked out. 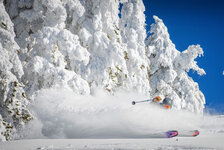 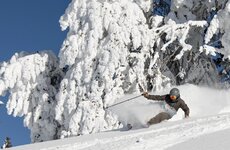 It's a really fun memory because after one run we didn't have any hope but we figured something out and got some of the best images we ever had while working together. The stoke was high.

snoseek said:
I had a couple days at Powderhorn with several feet of snow and not a lot of people to track it up. Think that first hour on a powder day and extend it for 2 days.
Click to expand...

Yeah, that place is awesome on a powder day. I think there was one other group riding the double when we were there.

13 inch pow storm with heaven's gate closed (you could hike up). some of the best runs of my life.

My fondest memory from last season is hiking to, and skiing, Castlerock for the first time 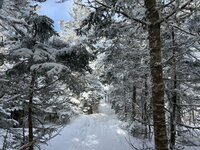 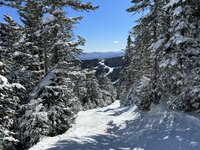 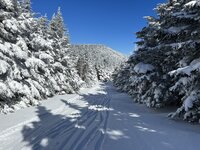 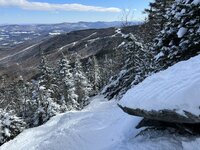 Nearly everyday at Bretton Woods getting first tracks for 30 minutes before the crowds show up.
C

urungus said:
My fondest memory from last season is hiking to, and skiing, Castlerock for the first time

Hiking and skiing CR when the lift isn't running is a very special treat. Absolutely love it. So surreal to ski CR with no one around and the lift not running.
D

Wouldn't surprise me if this is around the same time-frame as storm Steezy mentioned, but this run on Paradise last year in one of the VERY short windows that Heaven's Gate happened to be running that day absolutely is in my top 5 all time runs list. There were numerous thigh deep wind-blown spots that were just amazing to ski through... 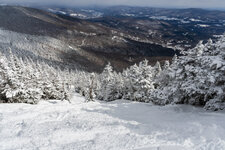 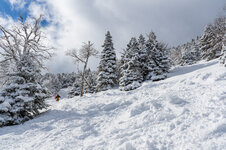 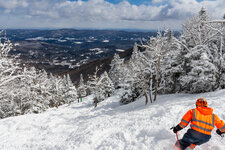 I was actually just showing these photos to some co-workers the other day when we were in a meeting and had some time to kill... 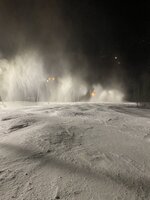 Four magical hours on one trail at Blue mountain Pa.
20°F 15mph wind blowing directly up the trail. Every run was a refresh , bumps all night long! Virtually no goggle stickage.
K

3 day storm at SBand Stowe was pretty good..
You must log in or register to reply here.