What a fantastic day to be at Cannon! We originally planned on being at MRG but due to plans to have our 11 year old snowboarder stay at a friend or relative’s home falling through we opted for Cannon. It turns out that this was a good thing! This was technically our first time there. We had been there the same exact weekend two years ago but the conditions were terrible – what a night and day difference! This trip Cannon was 92% open which was great for this time of year!

We got there around 10:30 and surprised that people were still filing in. In fact, it was actually fairly busy but not liftlines busy! While my wife and son got their gear on, I broke out warmer temp wax and touched up our planks and board which made a huge difference, IMO! The whole day felt fast with no spring snow slowdowns! We started up the Peabody chair then went to the Cannonball lift. We lapped that chair for a few runs (Vista Way, Tram Way and Cannonball) and then headed back to the base. Of the three runs Cannonball was most fun with mash potato pillows spread out which are fun on an open trail like that. Vista and Tram were nice runs as well but were experiencing more traffic which I do not like so much.

Once at the base we made couple of runs one on By Pass (nice easy bumps that could be skied fairly quickly) & Pauli’s Extention (nothing too exciting) and the other down Cannon (three trails in one) and over to Parkway. Cannon is an easy cruiser that had you paying attention due to the pushed up mash (made for nice mini jumps). Parkway was actually really fun and my son and I repeated that trail a few times later in the afternoon – it was complete with jumps that were fun to launch off without stopping. I never understood why people have to stand at the top of this trail to plan their run – just GO it is not that hard! Drove my son nuts!

We ate at the Cannonball Pub and I have to say – you get your money’s worth. I love the bar there – nicely done! We found the food to be very good pub grub and the service was great. We wanted to eat on the deck but it was packed. While we ate we planned our runs for the afternoon.

Before heading over to the Front 5 we did two runs that took us down Turnpike (another blind grass spot where it drops in) with the long run out (glad I waxed the base) and Ravine. I was laughing that the trail that is made up with Big Link/EasyLink, Missing Link and Middle Ravine which felt like a single trail but noted otherwise. Every mountain does it!

We then headed over to the Front 5, which was the one of the main reasons for skiing there (I thought) although there are others such as Mittersill which was not open. For my wife, she proceeded with caution – intimidated by the view from the road not to mention she was experiencing heel pain. We went down Gary’s which was a fun run with mash pillows scattered about. Rocket was similar but a little steeper and the mash potato bumps a bit bigger, widely dispersed but still really nice. There was a trail that crossed and on the downhill side of the crossing there was grass (blind spot) so I warned the others behind me and we skied around it. I was surprised no markers were present! I almost launched myself but stopped as soon as I saw it and banked hard around it. Next was Zoomer and Zoomer lift line. I blended the two trails in a single run. Zoomer starts off kind of mellow so I opted to ski the bumps under the chair which were some of the best that whole day and then cut over where Zoomer drops. That drop convinced my wife that she was done and decided that she would let my son and I complete the F5 while she skied off Peabody. Pauli’s Folly was for me the most interesting of the 5 since it was wall to wall bumps that were tighter and I think the largest bumps of the day. They were soft and being a trough bump skier found myself getting my tails tripped up by the mash. That trail made me work the most. My son and I then wanted to take Avalanche from the top so we headed back to the Peabody Chair then took By Pass, to Pauli’s Extention and finally down Avalanche. Not sure why, but once on that trail, I was kind of bumbed out. It did not feel as steep as it looks and I wished my wife was with us since she could have easily skied it. Now that I think of it was not very bumped out either (a little maybe).

As we headed back my son wanted to hit up parkway a few times so we lapped Peabody, meanwhile my wife decided to bag it for the day (father son time). We kept skiing By Pass and Pauli’s Ext over to Parkway (the path least traveled by others and more fun than the Cannon trails). By 3 my son was toast and I got in some solo time which I spent at the Summit. I skied Vista again (asking myself why) and then skied what was one of the most fun trial of the day Upper Cannon. Only problem there – people stopping in the middle of the trail or on the backside of a turn – I guess that made it ever more interesting. The final run was down Cannonball was a nice spring skiing trail – lots of exposure and mellow mash pillows to pop off. The one weird thing with this trail is the end where you basically have to stop while people are headed to the lift – then cross. Once I crossed I took Spookie over to Cannon and then to Zoomer before heading back up on the Zoomer chair and over to the deck for beer and sunshine with temps near 60. Looking back, I wish I would have skied some of the runs to skiers far left.

It was a beautiful bluebird day with nice spring temps and the trails skied well. It was a blast and I could not think of a better way to get re-introduced to Cannon. We used two Fox 44 cards and my son was half of the cost for a two for one since he was odd man out. 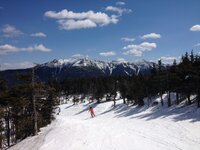 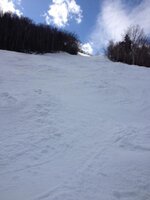 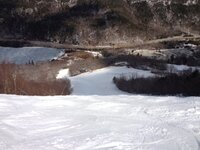 Part of the Cannon series of trails 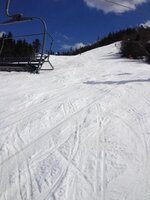 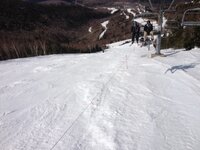 I hit Cannon last spring for the first time. It was midweek late March so Mittersell wasn't open, but there was plenty to keep us busy at Cannon, and it snowed most of the 2 days we were there.
One of my favorite runs was stringing together Tramway/Vista to Mid Cannon to Paulie's to Avalanche/other front fivers. A very long workout with some good pitch that got us warmed up real fast. Awesome mountain.
:beer:

I can not believe I missed Saturday.

We are planning on hitting Cannon this Saturday but it appears that might not work according to accuweather! Definitely keeping an eye on what is coming!

Wasn't there supposed to be some sort of ski off that day?

Abubob said:
Wasn't there supposed to be some sort of ski off that day?
Click to expand...

It was the 13th and only the hard core guys did it, so by default were the winners.

Siliconebobsquarepants said:
:beer:
It was the 13th and only the hard core guys did it, so by default were the winners.
Click to expand...

What did they win?

dlague said:
What did they win?

We won eternal respect on AZ

There is always next year.

dlague said:
What did they win?

Good one! So that is what it takes to gain respect - being 3 of 15 or so that actually made it to a ski off? Check - I will mark that down for next year! hahahahaha!

If there had been a ski off I would have lost miserably that day as I had no wax on my skis and conditions demanded it.

Wax is for the weak

xwhaler said:
If there had been a ski off I would have lost miserably that day as I had no wax on my skis and conditions demanded it.
Click to expand...

If I ever make it to a ski off - I will lose miserably - wax or no wax! There lowered that bar for myself!
You must log in or register to reply here.