Hello, check out the BLUE on radar and the SNOW atop Mt Snow! Yabba dabba dooooo!

skiNEwhere said:
Sunday is supposed be very cold in CO. Single digits or less, great for snowmaking. My guess it that A-Basin opens Monday or Tuesday at the latest. Bring on the WROD

Kind of missed the part that Wolf Creek is open today in CO, huh?

ss20 said:
Even with Monday rain I also think they should try to blow tonight and tomorrow night to get some piles made. Wednesday night onward looks like serious time. Ideally I'd think they'd try for a Friday passholder opening and then open to the public for the weekend.
Click to expand...

Seriously doubt they will try to open at K until nearing the weekend of October 27th. K1 closes after this weekend for the cabin swapout and whatever else work they need to do there.

I saw that. It's debatable if you're really "first to open" if you shut down during the week. Regardless, I'm not driving 5+ hours for WROD 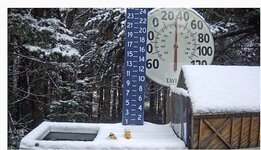 Smellytele said:
When K opens it is not just a WROD. It is (or at least the last 3 years i have made opening day) edge to edge coverage. It is the lift line at the North ridge triple that sucks.
Click to expand...

I know that. One way down edge to edge is still a WROD to me but there are several routes on the North Ridge pod that usually open.

But the general area open is usually all blue terrain, unless they blow upper cascade/downdraft; as you mention, the line at the North Ridge triple sucks. And I'm not a fan of the
walk on the staircase to and from the snow; I'll do it to ski early but don't love it. Plus the crowd is composed mostly of people who don't ski much at K but do so because it is the only game in town.

The best scenario is that Snow opens at the same time and everyone goes there instead.​

I've done the stairway once...it's fine. Hard to justify 3.75 hours driving each way. I usually wait till TTB wherever that may be. The good thing about North Ridge is with its elevation advantage a crazy October snowstorm could open up a nice assortment of terrain. Upper Dipper, Ridge Run, Powerline if the rocks are covered.

Anyway, Euro and GFS both very similar showing a 36 hour window to blow like crazy Wednesday night-Friday AM. It looks very likely they would not lose temps Thursday during the day. In the wee hours of Thursday temperatures could drop into the upper teens. That's gonna be real critical- they can open in a good 36 hour window but that can't be marginal temps at 28 degrees. Just a few hours with temps below 20 degrees and little wind could make or break a Friday opening.

Yesterday on the North Ridge. Definite feel in the air. 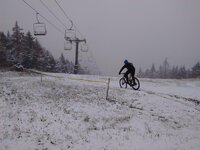 skiNEwhere said:
I saw that. It's debatable if you're really "first to open" if you shut down during the week. Regardless, I'm not driving 5+ hours for WROD

Wednesday night through Friday morning looking good for the beast. Another shot possibe Saturday night until Tuesday morning, but that's a ways out from here. Pattern has definitely switched to a more favorable pattern for the NE.

Nice sight, like the smile in the snow :-D

Smellytele said:
5+ hrs drive would suck but it would less of a crowd than Abasin or Loveland when they open on a wrod
Click to expand...

That and its not a WROD there. Three lifts and all natural.

skiNEwhere said:
I saw that. It's debatable if you're really "first to open" if you shut down during the week. Regardless, I'm not driving 5+ hours for WROD 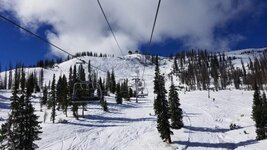 theres more moisture headed here this week. If Wolf creek gets it too (very likely) then it's actually going to start getting pretty good.
S

ss20 said:
One of my favorite threads each year is the opening day thread...the inevitable SR vs Killington comments. Someone uniformed shouting "don't forget about Woodbury!" even though they've been closed going on 3 seasons now. The people coming out of left-field saying Mt. Never-opened-earlier-than-Thanksgiving is gonna steal the show this year. People saying "they're only blowing out the mice- this isn't real!" as a webcam shows maximum snowmaking production. Skiers who "brag" about how they don't go out til after MLK weekend because the conditions suck anytime beforehand. The "armchair meteorologists" coming out and making crazy claims about how the temperature at the summit is gonna be 15 degrees cooler than what NOAA forecasts...just a lovely time to be on the forums [emoji38]

Well there certainly won't be any historically early openings this year. Just no cold air to speak of. Usually Sunday River has done a teaser on a 35 degree day by now but not this year. But at least the ponds are full, that's for sure [emoji38]

Anyways...not to tease without any information...

This is the NOAA temperature outlook map for October 6-19. It's old, last updated Spetember 21. This is not severity, just a % chance that the temperature will be above or below normal.
View attachment 24039

It's worth noting that NEXT weekend, the 6-8th, the European, GFS, and Canadian all have some type of cold front coming through! Just something to watch and get the juices flowing again! We'll be skiing sooner than later people!
Click to expand...

Wolf Creek for the national win opening on October 13th.

We were able to get it! While I wanted to go my wife lead the charge and we made the 3 hour 45 minute drive there and back to ski about 5 hours. This opening day was different than any other. It was all natural after 30 inches of snow they opened with wide open skiing any where you want - no ropes. There were nice powder runs early then powder bumps. They groomed several runs which were nice all day. While powder in open spaces got thick when the Colorado sun hit it with temps in the high 30's, the trees remained soft. It was the best first day ever.

No lines, no WROD and powder, bumps, trees as well as lots of groomers in play. 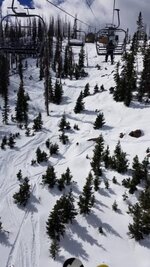 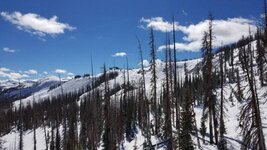 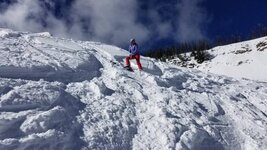 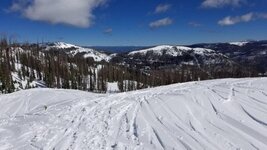 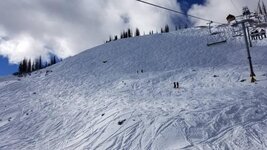 machski said:
That and its not a WROD there. Three lifts and all natural.

We made it and it was not a WROD type of opening. Read my other post.

Looks amazing, I am super jealous. Hopefully not too much longer to wait here out east...
T

WOW! that is insane!
You must log in or register to reply here.

A
How cold have you slept in your vehicle ?
2