Beautiful day to cap off one hell of an early December week. Left home shortly before 6 and it was like a midwinter morning with the temp dropping to -6 at one point and stayed below zero pretty much the entire ride. Was still -2 going by the Skyeship but luckily broke through the inversion heading up the access road and it shot up to 10. Parked at Rams Head and was on the lift at 8:45.

With two feet of snow this week between the early week storm and the surprisingly good shot of snow Friday, the trail count jumped up to 95, which included a rare chance to ski many different usual snowmaking trails au natural. This included my first run, Header, which was natural and ungroomed for the top half until Easy Street cut in. Nice warmup run with soft, sometimes untracked snow up top and then finishing up on some fresh cord.

Headed up to eventually the Canyon for the next hour or so. Rode the new North Ridge Quad for the first time which was nice and comfy. Also had a small line as people were drawn to the perfect packed powder underneath on Rime. Have to admit that even though I was chasing whatever natural terrain they had open, I was also drawn back down Rime for some nice GS turns.

Over in the Canyon, Double Dipper was a ton of fun to ski, especially the upper 2/3rds. The wind was blowing straight down the fall line, filling the trail with fresh powder all day. No snowmaking yet, so a lot of thin spots including a few real nasty spots that spanned the entire trail, but along and inside the rope there was consistent deep powder all day. East Fall was slick, even by 9:30. Too many people skidding down it. Didn't even mean to ski it, but Racer's Edge was closed when I tried using it to get to Royal Flush. Speaking of which, not a ton of fun. Not any worse coverage wise than Double Dipper, but the powder was replaced by rock solid bumps and lots of ice in between. Hit Powerline on the way to Flush, also kinda ugly. Did a Light/Escapade/Flume run. Light was in beautiful shape. Escapade wasn't bad...lots of powder bumps and overall not bad. Does Flume ever not suck?

Moved over to Superstar next. Seemed like a mistake at first as there was a decent line, but it must've just stopped for a bit or something because every run after that was a 10 chair wait max. Lots of good stuff accessible off that chair today. For starters, Old Superstar was the trail of the day. Full of small, soft bumps and the base was nice and soft. Not quite as good as Mt. Snow was Tuesday, but close. Did many repeats there. The right side of Middle Ovation was pretty good up against the weeds, but the left side was big icy bumps. Superstar proper was full of death cookies and pebbles, but actually skied well later once those got chopped up a bit. Skyehawk was pretty slick but had some good bumps. Skyelark was nice up top but a sheet down below. Ventured over to the old Bittersweet steep, which is almost too grown in to ski. Glades on that side were pretty thin and boney.

Best treat of the day was the many runs down Gateway or Launch Pad over to the powder filled runs of the Needles Eye area. Thimble, Needle's Eye, Stitchline, Vertigo all incredible. Untouched powder everywhere and it was very peaceful with no lifts running. Felt like lift serviced earned turns. Even did a run down Dreammaker which wasn't quite as good and the longer slog back on the Crossover wasn't worth it. But man, almost had an MRG vibe with the peaceful feeling, deep powder, and people just exploring everything.

Did a Catwalk run on the way over to Snowdon. Pretty slick run, but another one of those peaceful trails with no one around thanks to the small hike. Continued onto Downdraft which was nice and soft. Was roped past the turn into the Canyon, but that lead me to discover that Cascade was skiing beautiful under the guns. Driest snowmaking I've ever skied, didn't even stick to clothes or goggles.

Skied the lunch hour at Snowdon. First run, the Six had a long line, but simmered down quickly with people heading in to eat. Simply put, they need someone to do line control over there. Tons of chairs going up with 2-3 people on them and a lot of the people have no idea the chairs hold six people. Anyways, did quite a few runs in the woods which were pretty nice on that side. Coverage was the best out of all the marked glades (some unmarked were in better shape elsewhere) and a few fresh lines as well. Didn't really enjoy my Northstar run, another one which was very slick with frozen bumps.

Headed back to the lodge for lunch around 1, but didn't have quite enough steam so ended up jumping on the triple and realized midstation to Conclusion was really fun. Climbing up the hill next to the midstation revealed a nice powder filled slope, then once onto the steep it was thin and gnarly in spots, but nice and soft. Did a few repeats and then finally headed to lunch.

After lunch I went back over to Superstar for a while, mixing Old Superstar runs with Needles Eye runs. Went back inside for a beer around 3 and realized this is the last year of Mahogany Ridge. KBL is one of my favorite lodges and I'm sad that it'll be gone next year. It has the rare feature of bathrooms on the main level and had a nice kind of old school feel. That bar is in my top 5 in New England with the older advertising, murals, and overall friendly vibe. All to be replaced by another fancy unoriginal lodge. I know it's small, but sucks to see it go.

Had time for two more runs, did a Light/Cascade run and finished with Double Dipper. The wind was absolutely roaring straight down the fall line at that point and the inside of the rope on DD was almost knee deep top to bottom. Forgot how fast sunset creeps up this time of year, finished the run at 4:05 and it was almost dark by then.

Sucks to see that all this great snow is going to get rained on the next couple days, but hopefully the backside produces a nice refresh. But for the second straight year, the week after Thanksgiving was tremendous and this time I actually got to take advantage. Hopefully a sign of things to come this year. Awesome to get multiple high quality days in this early in the season. Not sure when I'll be out again because I'm spoiled now and don't want to go back to groomers lol. 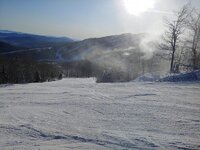 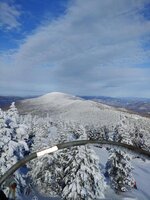 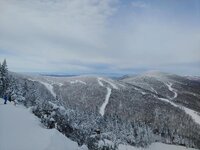 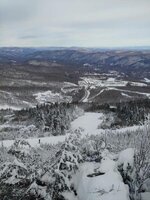 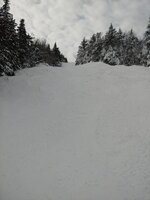 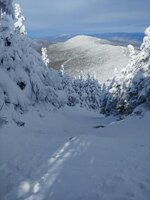 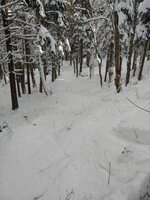 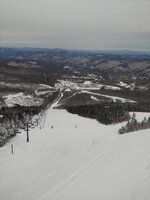 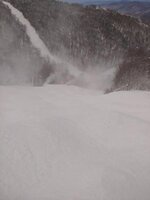 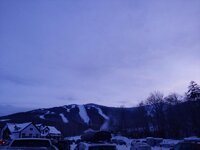 I thought about coming up to K today. Saw all the additional openings. Decided I was happy to lounge around instead.

Glad you had a great day and to hear you had a good powder day in the east.

That tree pic looks like the light...helter skelter to the light to lower DD one of my favorite lines at K light always seems to have good snow sometimes exceptional.

Believe it is Low Rider or another Snowdon glade. The Light had much better coverage.

From all the reports looks like everyone had a stellar week

sweet. those snowdon glades hold the best snow.
You must log in or register to reply here.