I was contemplating it for the weekend but I think I'll stick to the bike at this point!

Stunning day out there! Good as supe gets minus the rocky headwall!

What's going on at K? It's 2:50PM, the lift isn't spinning, and no one's on the hill except a guy hiking the lower pitch.

EDIT: K webpage is reporting that the quad is down for the day for a mechanical repair. Sorry to hear that. At least they are anticipating opening as scheduled tomorrow morning.
Last edited: May 14, 2021
S

I see dark clouds around, probably was some thunder.
S

Website says lift broke down, they hope to have it fixed for tomorrow. 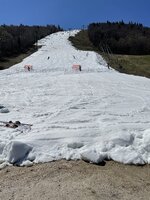 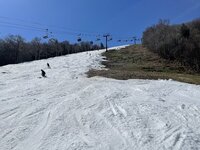 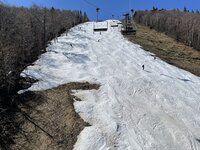 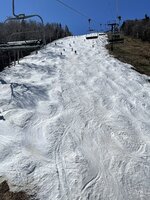 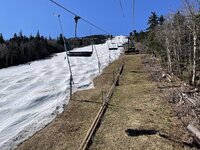 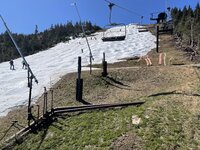 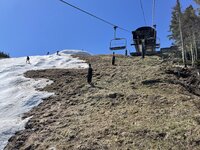 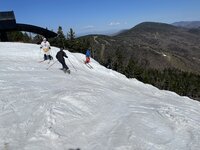 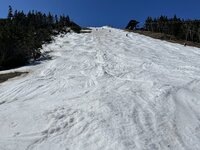 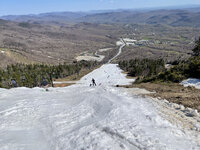 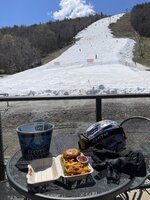 Headwall was starting to show a few rocks by the time I was left but I’ve seen it much worse.

skiur said:
Website says lift broke down, they hope to have it fixed for tomorrow.
Click to expand...

Wonder where superstar replacement is on the priority list. Mid 80s first generation hsdq with a bunch of hours on it. They sell a pile of day tickets on Saturdays in May that they would presumably be forced to refund if it cannot run. Cannot think of another lift in New england with a similar down day cost.

thebigo said:
Wonder where superstar replacement is on the priority list. Mid 80s first generation hsdq with a bunch of hours on it. They sell a pile of day tickets on Saturdays in May that they would presumably be forced to refund if it cannot run. Cannot think of another lift in New england with a similar down day cost.
Click to expand...

Well, not quite a mid '80's HSQ with all the Poma modifications done after Yan went bust in the late 90's. K has 4 of those machines, unlike the other remaining lifts of that ilk in the east. Means they can K-Ball original Yan parts off one of there other lifts if SS's break down.

Feels like a light crowd today but the headwall is going fast.

Thanks for posting the spring skiing stoke guys. Looks great.


The rest of the forum needs the help.

machski said:
Well, not quite a mid '80's HSQ with all the Poma modifications done after Yan went bust in the late 90's. K has 4 of those machines, unlike the other remaining lifts of that ilk in the east. Means they can K-Ball original Yan parts off one of there other lifts if SS's break down.
Click to expand...

Yeah almost all of those lifts are early 90s Poma technology which are more than abundant at K as most of their fleet of detaches is from early-mid 90s.

I hung out at the top when the lift broke and watched/listened to the mechanics as people cleared the hill (giving me an uncrowded final run). It was a piece of terminal equipment to move the chairs along in the terminal (don't remember the technical name). That's a Poma part not a yan part, which are supposedly just motors, tensioning, and obviously terminal foundations/skeletons and towers/heads from what I've heard about the re-fits.

Got in my last runs of the season today. Went up late expecting to ski the 1:30-5 shift, but the weather had other ideas. Lift went down at 3:30 for lightning so I called it quits. Think it did reopen after I left.

Trail was mostly decent. They still have a good sized whale at the top to give the headwall a good covering one more time, and it will need it. Beginning of each run was spent sideslipping down as all the snow was gone on the top half. Other than that, there was one small shitty area just before the top of the final pitch that could be avoided by staying left. Most of the trail feels deep enough to make it one more week, and I'm sure they'll be able to bridge up the gaps just fine. Forecast looks bad for making Memorial Day though.

I know it wasnt quite as deep as normal, but kudos to Killington for still blowing the glacier in a year where people would've understood if they decided not to. Good crowd on hand and some good acoustic on the deck too. Today was my first experience of being in public with no mask since last April and it was pretty strange at first, but hopefully it will catch on in MA soon because I sure as hell didn't miss wearing it today.

Hopefully we'll be back to normal operations this fall and get some pre-Halloween skiing in! 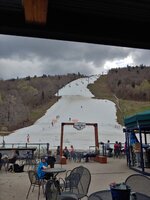 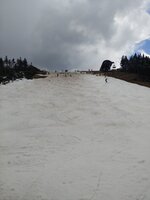 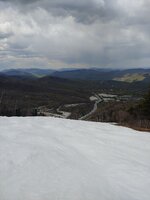 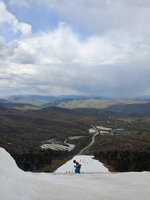 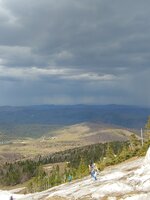 I know others are optimistic but I am skeptical they make it another weekend after skiing there Friday. They'll open if just the headwall is walking required. But between towers 3 and 4 was down to rocks as was to the lookers left of tower 5. If there's three sizable walking patches between those spots and the headwall they'll call it quits, based on what they've done in years past.

The bottom is deep enough they could probably patch between T3/4. Idk what why'll do to patch T5 just above the bottom headwall. That was a sizable break on Friday, I'm sure it was realllll sketchy Sunday.

Also the past few weeks have been cloudy and cool with temperatures not even cracking 65 degrees many days and dipping into the upper 30s at night. We're finally getting into seasonable weather with temperatures in the 70s and little relief for the snowpack at night. And brilliant sun. The rate of melting will increase exponentially especially in places where there's already dirt mixed into the snowpack.
S

I skiied Saturday and most everyone skiied the headwall. Sunday was a big difference and most people were walking the headwall. I give next weekend a 50/50 chance. Supposed to hit 80 on Wednesday.

They're definitely plannjng on one more weekend. If not then they wouldve spread the pile at the top. The Headwall was as ugly as I've ever seen it today, including June 2 years ago. They wouldn't let that snow in the stockpile sit there if there was a chance next weekend wasn't happening.

Skis on snow the rest of the way. T5 was fine on the left side of the trail today and they didn't even groom in there. Right side was blown out. Plenty of snow to spread there. Couple other small areas they'll have to bridge.

Might get ugly by Sunday next week but they're 100% coming back one more weekend.

It has always amazed me that they can keep it going as long as they do each year. Sure I've been there and seen the depth of SS, but still its cool that going into the 4th weekend of May (which most years is Memorial Day) there is a chance for 3 more ski days.

based on when I've checked the webcam it has looked busy I hope they've sold lots of day tickets, beers and food.
You must log in or register to reply here.

Loon Mountain Opens for Skiing and Riding on Nov 16th, 2018