Much like Platty I found myself saying to myself, "Why did I wait so long to ski this place?" after finally skiing there.

McCauley was on our radar for last week's LES event. Unfortunately the snow fell between McCauley and Snow Ridge, missing both. Rambo, myself, and Dickgazinya, had a great session of night skiing at Greek Peak Tuesday night. 4" of fresh had made everything that was open a joy to ski. The lift ride in the howlling wind and freezing rain was another story. We managed 12 runs, with a bar break in the middle. We looked like glazed donuts when we walked into Trax. On the ride home Dick was doing his best to convince me Wednesday would be worth calling in sick to ski McCauley, I had my doubts, but finally agreed.

When I opened my door to get the morning paper I was afraid I'd been duped. Ice skates would've made the trip to the curb and back much easier, everything was encased in ice. I started my car and took the paper inside, miraculously without falling on my ass.

We hit the road about 6 and pulled into McCauley's lot right at their 9 AM opening. The roads weren't bad, except for the passing lane on rt 12, I used it anyway, icy crust. We booted up in a nice old school lodge, and headed to the ticket booth to pick up our $20 tickets, well mine was $20, Rambo's was $15, since he's over 60, and Dick has the iskyny gold pass, so no charge for him. 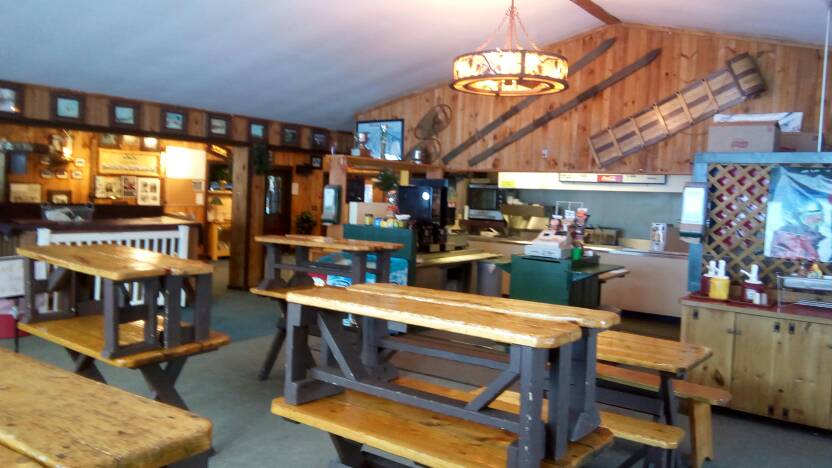 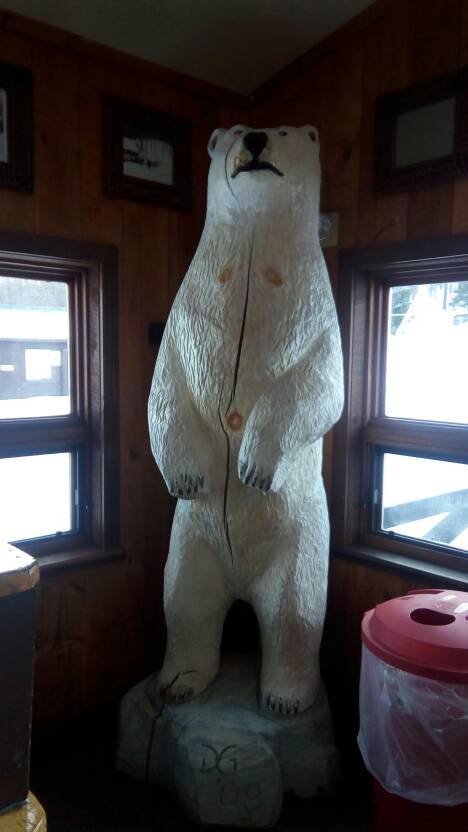 I was warned by the lady at the ticket booth to stay on the groomers first thing. We loaded the ice coated double, there are two tbars and two rope tows, all but the double were idle. We heeded the lady's advice for the most part, we did ski some mellow ungroomed trails too, they had a couple inches of fresh snow on them. 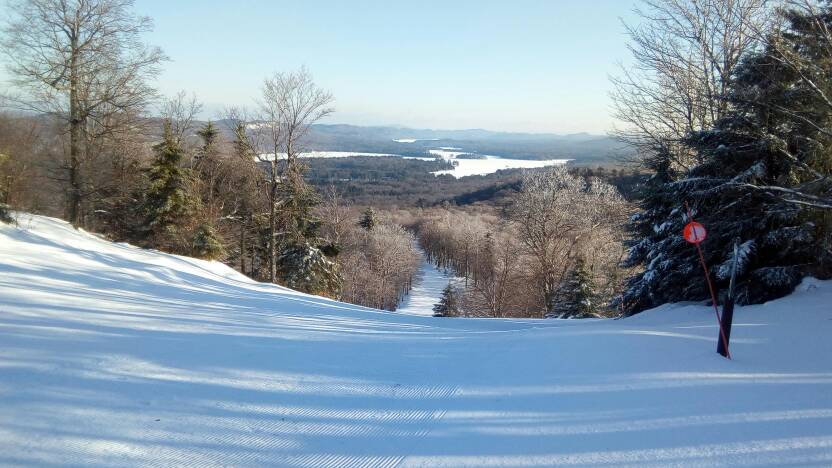 As we skied the groomers, we stopped and eyed some glades, some roped, some not. We decided it was time to try em. They looked good, what with a fresh two inch coat, but what lied beneath, we weren't sure. Thankfully it was firm, but edge able, and skied like a dream with that fresh coating on top. 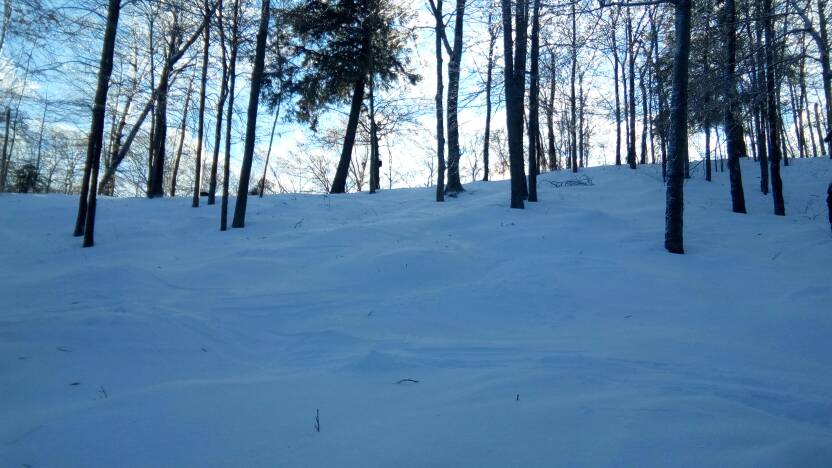 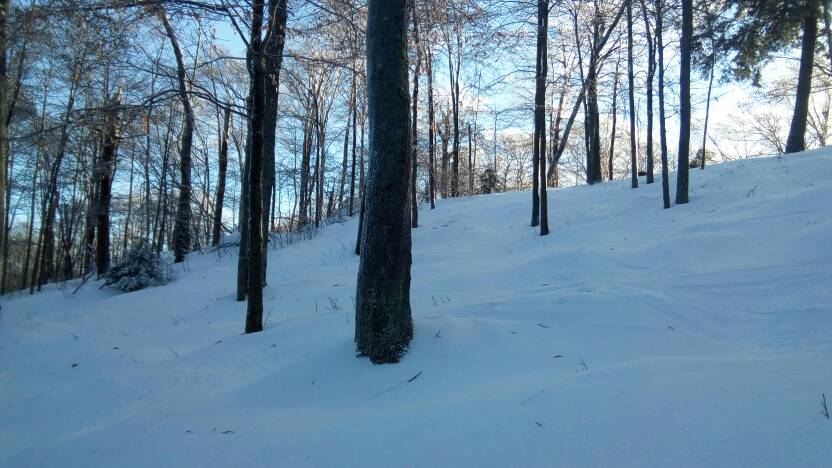 We lapped the trees and the bump trail, God's Land, until we broke for lunch at 11:30. 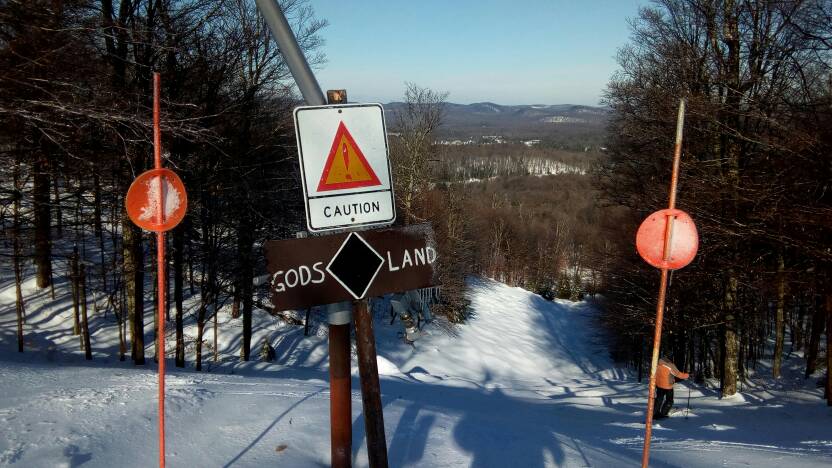 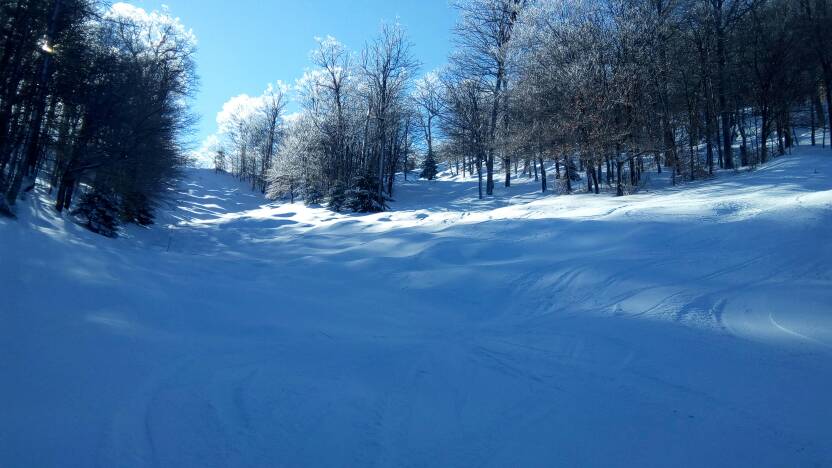 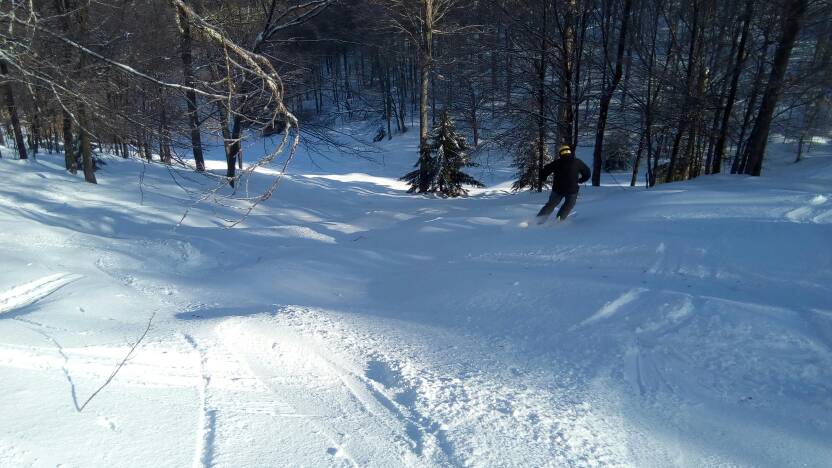 The food was basic cafeteria fare, frozen ground beef paddies, but they were good, and filling, fries were made to order. $9 including a small fountain soda. I added a small black and white cookie, $2.50. I even left a tip at the register, livin large, what the Hell, my lift ticket was 20 friggin dollars!

As we rode up the double after lunch, I noticed the ice was gone, and a few more people had shown up. There were only a couple other hardy souls besides us at opening. We noticed the rope had been dropped on Helmer's, the trail beneath the lift. 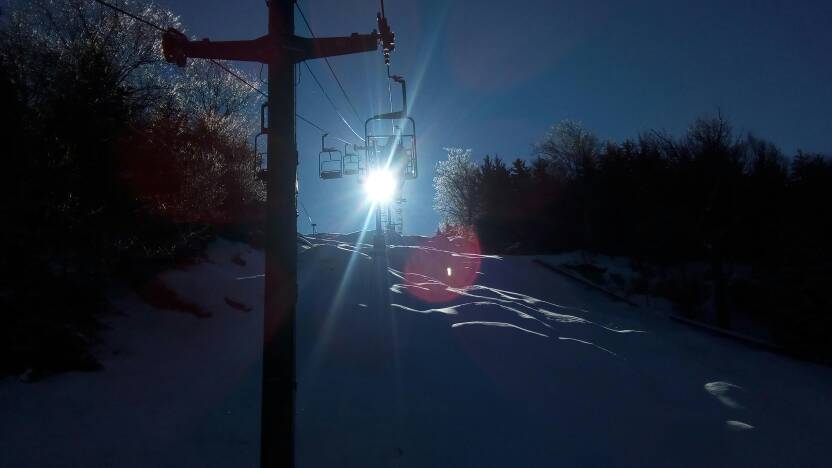 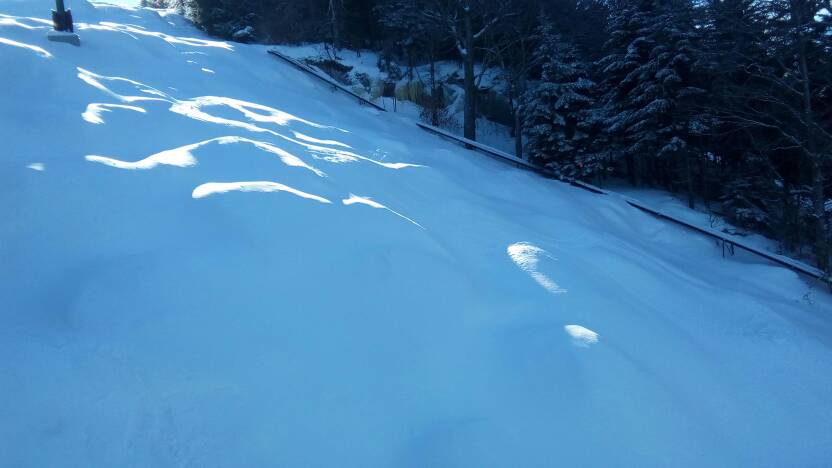 Dick and I hit it. It was challenging, irregularly sized bumps, firm underneath, once was enough for me, Dick hit it several more times. A similar trail, Olympic, runs beneath the tbar, it remained closed. They did drop the rope to the trails skier's left from the top that were closed in the morning. Dick beconded me onto a trail he skied a couple runs ago alone, DeCamp. There was alot of snow on it, but it was exposed to the freezing rain overnight resulting in breakable crust. It was difficult to link turns. I did pretty well, until about half way down, burried a shovel, double ejected, bounced directly off the top of my helmeted head. I was barely moving, so the impact was minimal, still not a good feeling, makes you realize how easily you could break your neck. A couple more tree runs on the other side, and we were done. 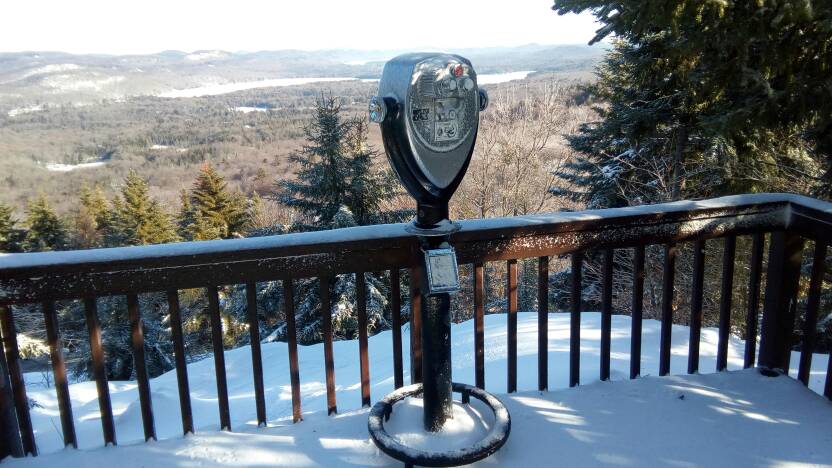 I was hoping my first visit to McCauley would be a pow day of a foot or more, they do get LES off Ontario, unfortunately not in the prodigious amounts Snow Ridge does. Too bad, because the terrain, and steepness, of McCauley blows away Snow Ridge. You could actually ski 3ft at McCauley. I am glad I went, had a great day. Now I can charge the place when I do return on a powder day, can't wait.

Doh, Friday the 13th today! Nick, fix that for me please.

A couple of pics: 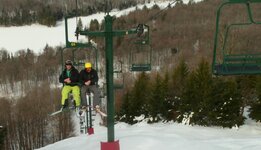 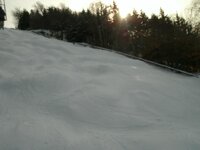 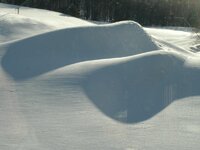 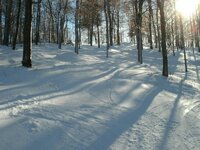 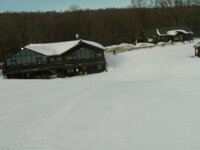 Never heard of it looks like going back 20 years in time at Berkshire East.. but with more snow!

bdfreetuna said:
Never heard of it looks like going back 20 years in time at Berkshire East.. but with more snow!
Click to expand...

When we got within 50 miles the snowpack on the sides of the roads appeared to be a good 3 ft, doubt it is now. That was another factor in burning a day off, I knew what was coming.

Looks like a fantastic old school spot with no run out.

My family has a place up in Old Forge and McCauley is great when they get a nice dump. Some nice steep glades and technical trails with rocks and drop offs to play on.

Skiing was really good right around New Years before we started getting into the rain cycles. Hoping when the pattern changes again that the LES machine will crank back up since the lakes are still open. If it does that will put them back in business, as well as the snowomobile trails which were awesome up until the last week.

Yup its the real deal , retro vibe, you get it all ,more variety than the Ridge and Helmers !!!
You must log in or register to reply here.