We have not seen much snow out here in southern Oregon. The mountain received about 50 inches before thanksgiving and then that week there was a warm up and a considerable amount of rain that washed away the snowpack. Opening day was scheduled for 12/9. That didn’t happen. There were a few good snow storms the week of January 22nd which allowed the mountain to open on Friday 1/23. The only opened the beginner lift (sonnet) and the triple which accesses the lower mountain. I was working so didn’t make it up that day. Our first day out was Saturday. The parking lot is about 20 minutes from our house. We pulled in around 8:45. You need a sno-park permit in order to park on the mountain. They sell day passes or season passes at various locations around the state and the permit is also good in California and Idaho. We walked to the lodge and picked up our season passes which is our first day tradition. One thing about this place is it is definitely a local hill. My son and I bumped into about 15 people we knew from school, work and the neighborhood. I don’t think I bumped into that many people at sugarbush in my 3 years skiing there. The mountain is set up different than any I have been to (although I haven’t done any skiing outside of the east coast before this point). The lodge and parking lot are at mid-mountain. You can easily access the parking lot throughout the day very easily. Much more easily than hiking up the hill to the lodge. The lodge was recently renovated this year which gave more space inside and they also closed in two of the sun decks and put floor to ceiling windows so you can see a good portion of the mountain from inside. I hadn’t been inside before then so I can’t say how much it improved but it was spacious and had a good layout. I hear it can get busy at lunch time but we never went back in the lodge after we picked up our passes.
The mountain only has 23 trails but it skies a lot bigger than that. The trails are wide and the trees look well-spaced with good pitch. We skied down to the lifts to find they had just opened the Windsor lift which takes you moist of the way up the mountain. From the top of that lift our first run was tempest. Trail was soft with good coverage with plenty of untouched snow on the sides. Off trail I go to find out what they mean by cascade concrete. Thick, sticky and hard to turn! Back to the trail I go. Next run we went left off the chair to Romeo and Juliet. Both were good with decent pitch and good coverage. Looking at the map Romeo is the blue trail but after skiing them I think that should be reversed. We took a few more runs then back to the car to refuel. We took another 4 runs on the same three trails and called it a day around 1:30. It was our first day out and our legs felt it. Temps were supposed to be above freezing at night so they didn’t groom. Well, it did freeze so the first hour or so was scratchy and hard. Warmed up and softened throughout the day. By the end of the day the lower mountain was pretty looking pretty thin with plenty of dirt and rocks poking through. No snowmaking up at Mt Ashland but they do a lot of snow harvesting. They did extensive work over the week to move tons of snow to stay open. Work kept me from going up on Monday and they are closed on Tuesdays and Wednesdays. Next trip up was last Saturday. Soft snow but some thin coverage. Most of the locals took a run or two and called it quits. Not this east coast skier. Skied most of the day in soft snow and built my obstacle avoiding skills throughout the day. Family obligations kept me from getting out on Sunday. Sunday was the last day they were able to open. We are waiting for more snow with nothing in the immediate forecast.

So that’s my report. I have 3 days in so far this season :-? with a ticket average of…..$133 so far . I am really hoping to get that down. Scheduled closing date is 4.15 but the mountain has already said that if they have the snow they will stay open until May. Here’s hoping!

If you have any questions or want some more info on the mountain feel free to ask. It is definitely a cool place and I have only skied a small portion of it. Hoping to get to the summit real soon and be able to check out the bowl.
B 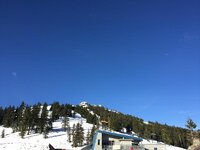 Looks like a fun place
I see they had to close for a bit though. Hope you guys get some snow soon.

I checked it out on google earth...Seems to be a lot of open space on the backside and a small bowl right off the parking lot. Do they allow skiing out of bounds?
B

danimals said:
Looks like a fun place
I see they had to close for a bit though. Hope you guys get some snow soon.

I checked it out on google earth...Seems to be a lot of open space on the backside and a small bowl right off the parking lot. Do they allow skiing out of bounds?
Click to expand...

It definitely has a lot of potential. Just need that SNOW! They do allow skiing out of bounds and there are several emergency shelters scattered on the mountain just in case. Lots of cross country ski trails that leave from the parking lot too. 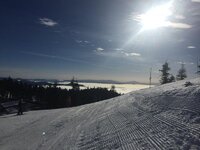 Looks pretty scenic at least
You must log in or register to reply here.