Being the procrastinator that I am, Friday night I felt like Ray Liotta in Good fellas when he kept seeing the helicopters. I got out of work, ran to the hardware store to pick up a bolt for my roof rack that I buggered up last year, and some epoxy to glue a crack in my bumper cover, and reattach the brim on my Smith Variant Brim helmet. I then stopped at the Y for a workout. From there home, quick bite to eat, start laundry, the head to the garage to install roof rack and glue things. Next it was time to clean up so Scotty and I could be comfortable hanging with MJ. Running late, time to pick Scotty up at the bus station, first I had to throw a couple boxes in the car that I needed to deliver to my Brother after picking up Scotty. Keep stirring the sauce kid.

After a hectic Friday night, everything went like clockwork Saturday morning. I got up early, got all my ski crap together, even had time to make waffles, eggs, bacon, and sausage, for breakfast. We picked up Rambo, and headed for Turin at 7, exactly as planned. We arrived at Snow Ridge a half hour prior to opening, 9:30. We booted up, got our passes, and got in the growing line. They were a half hour late loading for some reason. 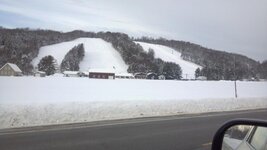 A view from the road upon arrival.

There were blue skies and sunshine for the first two runs, then the clouds came. The snow was great, the 35" SR was claiming had consolidated to knee deep on the hill. I should've snapped a few pics while the sun was out, I did not. 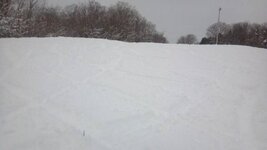 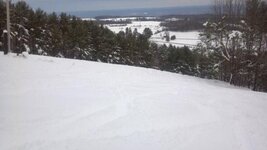 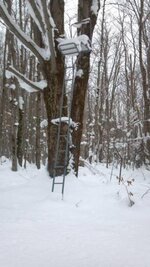 You won't see this at Stratton

The liftline was the longest I've seen at Snow Ridge, it only subsided at lunch, and again when the freezing rain/ rain began in the afternoon. The line moved smoothly, as everyone there was capable of loading, and unloading the lift without issue. The snow was great, it got a little manky in the afternoon, when temps rose, and rain fell. My legs were shot by then, and I was happy to stay on the groomed swaths for the last hour or so. We all agreed to pack it in at 3, and head back to Binghamton. Powder skiing in November, gotta love it, thanks Lake Ontario.

The mini AZ summit at Snow Ridge didn't pan out, but the NY ski blog Harvey Road was well represented. Along with Harvey himself, 7 other members made it to Snow Ridge, that I'm aware of, me, Scotty, Big D, Danzilla, Powderqueen, Pam, Glade Runner. Harvey traveled from NJ, though I think he planned on being in North Creek anyway, still impressive.

How far from snow ridge do you live?

Nice!!! Hope to hang with you guys and mj one of these days

What neat little snowy hill. Awesome meeting so many people their from Ny ski blog. That place definitely getting the lake effect light powder lines. Skis did good loving those to. More fun in this beautiful part of NY snow more then North Vermont here ! Wondering if snowylover is reading this.

Scotty, did Plattekill get any of that lake effect snow?

legalskier said:
Scotty, did Plattekill get any of that lake effect snow?
Click to expand...

As of today all I know is Platty has a 6 inch base and is not planning in opening this weekend unfortunately or I be heading there.

Missing East Coast believe it or not. SnowRidge is a special place!

Way to get it boys.

Missing East Coast believe it or not. SnowRidge is a special place!
Click to expand...

You should go to Taos with me, ever been? Right up your alley, lots of hike-to extreme shit, when they get snow, doubt I could keep up with you though.

Vinny, how the Hell are you? Fully recovered? Did you get back out after your crash last year? How'd the kid make out? Sounds like that part of it shook you up pretty good. We'll have to get together this year, Elk perhaps, or Platty. I really want to knock Hickory off my list. I hope to go West for two weeks, CO and NM, so I don't see skiing New England much. Glad I got Scotty up to Snow Ridge, place is so cool.

Things are fine. The hand should be good but I wasn't allowed to do anything until May so nothing else last year.

This year will be sparse for me as well because of the baby but let me know and we'll get something going.

Cornhead said:
You should go to Taos with me, ever been? Right up your alley, lots of hike-to extreme shit, when they get snow, doubt I could keep up with you though.

Sent from my DROID X2 using Tapatalk 2
Click to expand...

Never been but I think they just got smacked with a decent storm. Early season has been good out here!
You must log in or register to reply here.