Day one baby!!! Snow conditions don't matter the first ski day and the last ski day...but if they did...it was great!!! Killington had patched together a nice selection of terrain. Downdraft was open with snowmaking bumps (already pretty scratchy). Ridge Run and Powerline were open on natural snow...very interesting. Honestly it was a novelty. There was such little snow there weren't "moguls", it was really grass skiing with soft piles of snow. Ridge Run held up well but I did Powerline twice and that was enough. Mouse Run was in mid-winter form and had the most edgable snow for November 15th I can ever remember skiing. 100% carvable with no sliding out or scratch. Ex-Mousetrap had soft snowmaking powder on the skiers right. Double Dipper not faring well at all...needs some serious blowing. Lower Rime above the net was an ice rink as well. Other than those two spots pretty damn good/consistent ski conditions given we had bare ground 2 weeks ago.

Minimal liftlines, some solo gondola and chair rides, pretty much ski-on for the lifts and a 5-10 cabin wait for the gondola.

I had 2 crazy close calls with people today. Both were pretty much "nature of the sport" incidents. I started down trail, carving on the left half of it. I looked back and saw someone behind me on the right side of the trail (pretty far back). I stayed on the left side of the trail, he stayed on the right. He picked up speed and he timed it just right so that we both TOUCHED in the center. My ski tips touched the tails of the guy in front of me as we were both finishing our turns. Crazy stuff. He never knew it either. Who do you blame? I always look back behind me with paranoia...but once I've established my line I'll look back every third turn or so. Still much much more than the average skier. I've never ever been hit from behind...and I've night skied many times at Thunder Ridge and Mohawk...:lol:

And on lower Bunny Buster I was skiing with the flow of traffic, making 10ft radius turns maybe? That's nearly half the trail, to be fair. It is a narrow trail. Anyway, I'm doing my thing and I hear someone make evasive moves behind me (very close). I stop, not knowing what's happening. And the guy stops right next to me. He broke his pole avoiding me! "Dude you broke my pole!". I don't really know how the hell he broke it... but I'm glad... he nearly took me out. This one was less debatable in my mind...I was clearly in front, continuing my rhythm, and had a lane on either side of me open. Unless I'm skiing a 15ft wide traverse I have every right to be turning (as long as it's in a consistent pattern and doesn't take up the trail). I'm sure he has another opinion but it's undeniable I was in front.

A couple guns going at the top of Ramshead. Guns along the bottom of Caper. Superstar getting to stupid-levels of snow. The pile at the bottom is literally up to the fan gun (you'll see it in my last pic).

New K1 lodge coming together nicely. I hope they keep the stairs between the parking "bays"...that was always a pet peeve of mine, having to walk to the end of a bay to start walking up to K1.

"Fun" Downdraft Headwall...can't use that f-word to describe that trail too much... 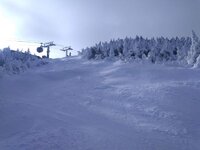 I came to the realization that the Snowdon triple is the last triple chair at Killington...and they have only one double chair (Snowshed). Everything else is a quad or more. That's crazy. 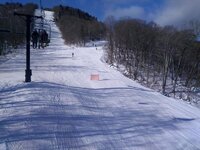 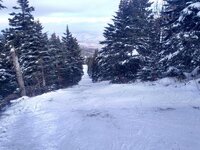 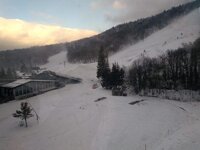 Nice report. What trail is this? Powerline?

urungus said:
Nice report. What trail is this? Powerline?
Click to expand...

Yes that is Powerline. One of my favorites at Killington...narrow and quirky. Too bad it's only on the upper part of North Ridge...there is absolutely positively no Lower Powerline :grin:

You broke his pole???
Guy sounds like a winner..good thing he didnt hit you

November Bunny Buster tales. Pretty much anyone who has skied K in November has got one. Can't name anither trail in New England that's a bigger skier traffic shitshow than Bunny in November.

deadheadskier said:
November Bunny Buster tales. Pretty much anyone who has skied K in November has got one. Can't name anither trail in New England that's a bigger skier traffic shitshow than Bunny in November.

ss20 said:
there is absolutely positively no Lower Powerline :grin:
Click to expand...

+1 no lower Powerline ever.

Its why i like the less travelled runs like old superstar,thimble,needles eye..anywhere a grooming machine..dies not go...

JimG. said:
+1 no lower Powerline ever.
Click to expand...

What are you guys talking about. Did the new lift take it's place?

bdfreetuna said:
What are you guys talking about. Did the new lift take it's place?
Click to expand...

Most people don't know it exists.

Not much for keeping "secrets" eh tuna?
1

no where near the Belt. K was crazy in that spot today.
You must log in or register to reply here.