We made our annual pilgrimage to Saddleback with a lot of excitement because they got plenty of snow this year. However, what we learned is - they get lots of wind higher up and any snow often gets blown off leaving any ice they had from the last refreeze in January. I will discuss this later. But the wind also helped the glades or at least some of them.

I will not bother talking too much about Red Devil, Blue Devil, Grey Ghost and Silver Doctor they were all in great shape and skied fast. The only new thing to mention is Woolly Bugger which was called Woolly Booger by the kids. I only made one pass through there and it skied really well with moderately spaced trees. Coverage was really good. We entered around mid way down Red Devil and skied down to Lower Hudson Highway which is a run out trail. This pod was not skied much outside of returning back to the condo. There was one time where I got on to the T-bar, which I understand has not open much lately, and discovered a fun bump run called Doodlebug and Parmachenee Belle - both nice narrow trails with decent bumps which ended up being my favorite trail in that pod.

Most of our time on both days was spent skiing off the Kennebago Quad. The top sections of Family Secret and Wardens Worry were closed due to wind blown ice mentioned in the beginning. However, we accessed Family Secret from Dark Wizard. Dark Wizard on its own skied very nice and was not effected by winds and apparently held on to the snow - kind of bumps in the woods. Family Secret was scrapped off (or wind blown) around NW Pass but just a bit further down skied really well with well spaced bumps. Wardens Worry was accessed via Tight Line but was a mess. Huge softball sized chucks of ice all over the place - still skiable but I would not want to take a digger there. Other bump tails were Upper sections of Professor and Peachy's Peril. The bump started small and progressively got larger. They were both lots of fun - my wife had not interest in those so I generally met her at the lift while she went down Green Weaver. Two trails that got lots of attention were Tight Line and Supervisor. These two trails are favorites of ours and are both super fun and fast. I like the character of Supervisor, steep, narrow and has turns.

We did venture out on Dazzler on the Ridge which was basically a huge drift which is where all the snow was blown. The were telling us the drifts were 9-10 ft deep. Basically, there was a cattle path cut into the drifts where sometimes you found your self side stepping to the top of a drift or gliding across like a cross country skier. It was a little sketchy at time especially for my wife. Our goal was #4 glade which is more open. When we got there, we found it wind blown and very icy, so we opted to ski down muleskinner which was steep in spots and bumped out in others yet fairly easy to ski until a rock or tree out cropping where is was pure ice from side to side. Basically went into a defensive side slide to get to snow below where we found an opening to #4 and the rest was easy peasy.

We had a great time and love to ski the steeps at Saddleback. We avoid the Rangley Double like the plague - that 14 minute or so ride is killer - about 6 rides over two days. One interesting option was the chair over the park then over to the T-Bar which seemed more bearable. The line just does not move very fast at the Rangley Double. 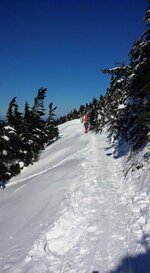 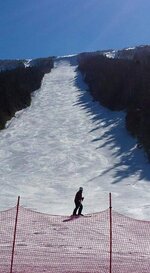 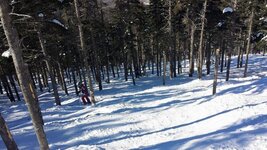 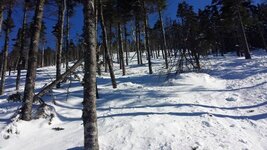 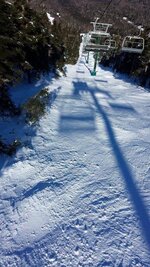 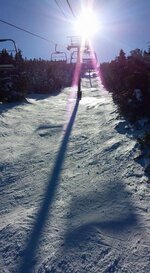 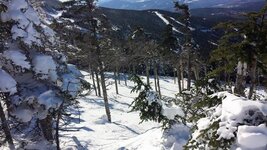 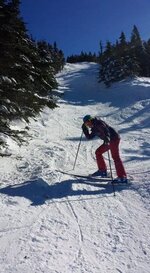 View from the top at Supervisor 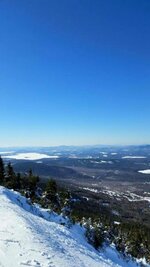 Nice pics. I'd love to hit SB, SL and SR in one trip but always get diverted to other places along the way.

legalskier said:
Nice pics. I'd love to hit SB, SL and SR in one trip but always get diverted to other places along the way.
Click to expand...

That would be a great trip for sure!

My brother in law and I ripped Tight Line at tuna speed a couple times when we were there.

Great report and pics! Saddleback is a special place. Glad you got to enjoy it at 100% open and amazing views.
The Sandy terrain park chair over to the T Bar and then across on "The Pass" is an effective strategy for beating the lines and lift ride.

thanks for the report. Reading between the lines, it seems like it was packed powder (natural and groomer), with a good mixing of slab. The wide open trees were PP, right? I'll bet the tighter trees have all the pow blown into them.
You must log in or register to reply here.