Ski and Snowboard helmets. Do you? or don't you? ride with one!! Have you been saved by one?? What are you using? and how is it?

So last winter after all day riding I accidently left my decent helmet and goggle combo on the roof of my truck or the restaurant seat. Into the winter night it went and $150 plus down the drain Been using a make up pair that wasn't the same quality lens or protection but it worked good enough. Fast forward I want a new light weight good functioning combo.

I built out a ("Pret" Fury-X helmet was $199 got it @($98 w/tax) with a Oakley Flight deck goggle both I got at over 50% off MSRP). Anyone else use a PRET helmet I never heard of them? I have till winter usage to swap or exchange

I got a Smith Vantage w/MIPS about a season ago, 5 stars, but a bit pricey.

Marker has been my brand since starting wearing them 10 or so years ago.

Probably due for a replacement. Never heard of Mips. How proven is that technology?

I had a Boeri XXL helmet for about 7-8 years. Hit a wet spot on a trail from a wet snow gun. Pitched forward, then hit ice and the skis went forward too fast and I went over backwards landing head and left shoulder first. Had another skier come over immediately with huge eyes, and in a shocked voice ask "Are you alright"!!!! I was awake, alert, and able to stand up pretty readily, so I said yes. Soon realized I had a pretty good headache going. Skied down to the base, and by then the headache had abated. Went in and had a cup of coffee, still felt OK, so I skied a few more hours with no ill effects. I now have a Giro helmet in XL as they are slightly bigger than the Boeri's. I still have the Boeri, but no longer use it as it took a really bad hit.

deadheadskier said:
Marker has been my brand since starting wearing them 10 or so years ago.

Probably due for a replacement. Never heard of Mips. How proven is that technology?
Click to expand...

The Pret helmet is a MIPS helmet

I wear a helmet but not wearing one is very cool looking I have to admit.

I ski the majority of my time in the woods when the snow allows. I have had my helmet save me from cuts mostly but possibly head injurys a couple of times. In really cold weather they are nice. In warm weather no so much.

I use a smith helmut/Goggle combo. It works and fits OK. I would never go back to not wearing one but it is a personal choice for everybody. Once it is 60 degrees plus in the spring, the woods are gone and we are sking spring bumps, I do tend to switch to my old hemmut and take out the side ear panels. Sometmes I do not wear one at all when it get real warm. Just sun glasses.

Buying a helmut because it is cheaper is not the way to buy it. Buy it on fit and spend whatever. It is worth it.

MidnightJester said:
MIPS is the new standard of protection for most of the upperline helmets across all companies it seems

The Pret helmet is a MIPS helmet
Click to expand...

The technology seems overpriced; at least with Marker. Their top of the line $200 helmet is now $300 because of MIPS

Does MIPS offer that much better protection? Do the materials cost that much more? I suppose $100 isn't that big of a deal when discussing head protection. I just question how long this new tech will maintain such a high cost or will it drop as it becomes the standard?
S

Have worn a helmet for about 20 years now, always been giro, they fit me the best. Besides protecting me from tree branches in the woods many times, they also are nice and warm. What they save me from the most (and also the most annoying thing on the hill) is when people want to pull down the bar before you even have a chance to sit down and position yourself and hit you in the head. Is it really that hard to ask ready before you pull the bar down???

I wear a helmet but not wearing one is very cool looking I have to admit.
Click to expand...

his thread titles remind of the Mt peanutbutter game show "Hollywoo stars and celebrities, what do they know? do they know things?? let's find out!"

Long story didn't decompress carving over a roller and my tips hooked up. Got slung up into the air backwards. Knew my knee was done but for one... glorious... moment... I looked uphill and believed I might land ok. Then bam! Landed on my back and smashed the back of my head on the hardpack and slid for awhile. Sat up and didn't understand why blood was pouring out of my nose. Tried to stand fell down. This happened a few times while I made a bloody mess of the snow. Patrol carted me off the hill, gave me a bag of ice, and asked me if I needed a hospital or if I was tough enough to drive home. I drove but don't remember it. Wife took me to the loacl ER. ER nurses immediately put me in a neck brace. Final call my head and neck were ok my knee was destroyed. Yay helmets!

skiur said:
Have worn a helmet for about 20 years now, always been giro, they fit me the best. Besides protecting me from tree branches in the woods many times, they also are nice and warm. What they save me from the most (and also the most annoying thing on the hill) is when people want to pull down the bar before you even have a chance to sit down and position yourself and hit you in the head. Is it really that hard to ask ready before you pull the bar down???
Click to expand...

I cannot believe how much this happens to me. People are either oblivious or terrified of heights.

This is why I wear a helmet. That's what the back of my head would have looked like (only a lot messier) if I hadn't been wearing it on a steep woods shot at Jay Peak several years ago. Replaced it with the same model because I knew it worked. 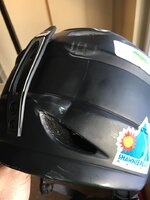 Relatedly, it's getting on for time to replace that helmet. I like the look of the visor helmets, anyone here wear one who also wears glasses? Are they particularly more or less prone to fogging than separate goggles?

the only days i dont wear a helmet are very late warm spring days, the woods are dunzo, and i am cruising bumps and groomers in sunglasses and a backwards baseball cap and my camo army jacket.

KustyTheKlown said:
the only days i dont wear a helmet are very late warm spring days, the woods are dunzo, and i am cruising bumps and groomers in sunglasses and a backwards baseball cap and my camo army jacket.

Careful there, im the same, helmet mid winter, baseball cap on Superstar in May, worked well except about 10 yrs ago, just started down the last steep drop, still snow skier's right in the woods, someone popped out airborne from the woods right as i was passing, 90 degrees to flow of traffic, i saw him flying at me through the air, I raised my forearm to fend him off, he went down, i did not, i had earbuds in, i asked him if he was OK, didn't really hear his answer, i said, "not cool" and skied away, made a couple turns and realized i was a little woozy, his elbow caught me in the head. Thats alot of force in one tiny spot.

Like helmets that have vents that open and close. Seemed to have had mostly smith helmets. Giro ones don’t fit me comfortably.

I have worn my helmet with out googles and wouldn’t recommend. I caught an edge and slammed face first. Helmet ended up getting pushed up which probably wouldn’t have happened with goggles on. Smashed my forehead. Had a concussion but was stupid and skied like 3 more runs. Each time going up I would forget the whole ride up. Forgot where I put my boot bag and where I parked. Teenage sons were with me so one drove me home. Had reoccurring headaches for 3 or 4 months.
S

KustyTheKlown said:
the only days i dont wear a helmet are very late warm spring days, the woods are dunzo, and i am cruising bumps and groomers in sunglasses and a backwards baseball cap and my camo army jacket.

Helmets aren't bad in the spring if you remove the earmuffs. It always blows my mind on a warm spring day and 90% of people are dripping sweat from their face but still have the earmuffs on. With the earmuffs removed and vents open and sunglasses instead of googles there isn't much difference between a ski helmet and a MTB helmet.

I took my old helmet and removed the ear muffs and some of the insulation to create a "spring" helmet. Probably not all that much protection, but better than a baseball cap.

Have both ski and bike helmets from Giro. Their Seam XL fits me like a glove and much better than other's. Looking to replace this yr. Considering their Jackson Mips. Needing an XL really limits selection as most Giro models only come in S,M,L. May have to try other's Mips as I'd prefer adjustable venting.

Wearing a helmet saved me a couple times... once at Hunter, high speed impact on boilerplate dented the back of the helmet (replaced), ended my day and made me a believer. Another time, standing with a buddy in the Gondola maze at Stowe with my back to the singles line. Some Jerry walking up the singles, skis on his shoulder, turns a quick 180 to talk to someone and clips me in the back of the helmet. There would have been blood...
You must log in or register to reply here.

Electric Cars/Trucks and winter weather testing with results. What do you think? Who has taken one in Freezing cold long distance to a Ski mountain?
12 13 14

Man up AZers... Are you the stuff Boy Scout skiers and boarders are made of?
2

Finding REAL REVIEWS is harder and harder for skis,snowboards, and gear. Opinions??
2