I was bored today, so I took a ride over to the River and took a couple laps on the chondi. Man, I miss riding a lift!!! And looking at snowguns.....

Anyways, after we finished riding up and down, I went in to get my season pass. While there, I asked what improvements they had going this Summer, I already know about the T bar next to Monday Morning. He speaks up and says FOUR new lifts! I say, tell me about the other three.

He tells me the other three are conveyor belts on Sundance. A little let down, but this is going to help out the beginners in a good way. The first belt will from the learning center sign in area, so you don't have to walk several hundred feet in ski boots as a beginner up to the current conveyor belt location. This will take you up as far as where Ridge run comes out, just below the current conveyor belt.

From there, they are replacing the current conveyor belt, which has been nothing but problems for them. When it was installed, it was the last one that company built and installed, and they went out of business, so replacement parts and tech service were hard. This belt will be move to the center of Sundance, so beginner beginners will be on skiers left, advanced beginners will be on skiers right.

Next, they will have a third conveyor that brings them from the top of that belt to about where the Fall Line condos are, which is just a bit steeper, so the beginners can step up their difficulty a little more before heading up the Southridge Express (Lift 2).

All of these conveyor belts will be covered,so snow removal will be less of an issue, as well as icing on the belts which caused problems with beginners slipping backwards on the belt.

I drove up to Sundance and nothing has begun yet, and I haven't seen an official announcement. But I was told by several employees this is happening this year!

Additional work includes the repaving of the Summit Hotel access road. I saw several of the condos getting roof work done and snow issues worked on(Not really Sunday River). I saw parts for the Monday morning T Bar in the parking lot. I am told some of the towers have been set, but I did not see that. I did see where the bottom of the race arena has been reworked, making for a more appropriate place to end the races and allow racers to come to a stop.

That's all I have for now!

Press release is right on the website media page for the carpets/T-Bar.

Will be interesting to see this as the two new upper carpets are suppose to go smack dab into the middle of Sundance. They are suppose to add terrain based learning elements to one side of the carpets as well (kind of wonder if the tubing runs are finished to allow this. That would give them much more trail width to play with).

Where it is now, yup. T-Bar towers on-site in the overflow lot by Snow Cap Inn now. Barker pond is being dredged (they drained it so must have something to do with snowmaking) and in town, the bowling alley is taking shape. 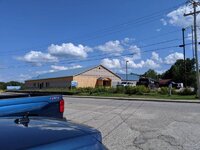 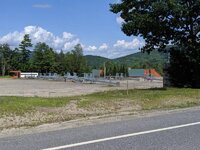 This year is inaugural run of The Mahoosuc Ridge to the River Challenge. Last fall, the Prime Time ski club had a hand in help cleaning up the scenic area of Spruce Cliffs and now the River has turned it into a trail! The challenge will go over this well marked trail, starting at teh Valentin Farm on North Road Bethel, ending at South Ridge.

While there, we could not help but go over to the new T-bar location. Here is what it lloks like at the top of Monday Morning:

Anyone excited to see Dopplemayr's trailer on site?

And the loading and unloading booth are all ready for install as well!

The river has placed picnic tables and chairs here and there on the mountain. Bonus points if you recognize the locations!

No amount of improvements can save that boring ass place.

There's an old saying, if you don't have anything nice to say, don't say anything at all.

Newpylong said:
There's an old saying, if you don't have anything nice to say, don't say anything at all.
Click to expand...

There would be no internet conversation then.[emoji51]

Tin said:
No amount of improvements can save that boring ass place.
Click to expand...

Excellent, one less D-Bag I have to deal with on mountain!!

Thanks for the pics, guys. It is cool to see how things are looking, although seeing the Crossbow sign...oh, never mind.

The Ridge to River course looks fun and extremely strenuous. That will be the toughest thing I have ever run.
R

When it's said that there is now a trail on Spruce Cliffs, does that mean it will be reopening as a ski trail? How come they shut it down years ago?

Razor said:
When it's said that there is now a trail on Spruce Cliffs, does that mean it will be reopening as a ski trail? How come they shut it down years ago?
Click to expand...

Hiking trail which apparently will be used as part of a half marathon course next month. I'd be very surprised if it's ever an on-map ski trail again. It requires too much snow and would get scraped off too quickly.
J

shwilly said:
Hiking trail which apparently will be used as part of a half marathon course next month. I'd be very surprised if it's ever an on-map ski trail again. It requires too much snow and would get scraped off too quickly.
Click to expand...

This. No chance it becomes a ski trail again. If you aren't making fresh tracks on it on a 12" powder day, you're virtually guaranteed to hit a wall of rocks covered with blue ice. It is still there for the rare years/during the rare storm it is skiable though!

My memories are by the second trip down you're on rocks already. Accident waiting to happen with it marked.

Razor said:
When it's said that there is now a trail on Spruce Cliffs, does that mean it will be reopening as a ski trail? How come they shut it down years ago?
Click to expand...

Spruce Cliffs was removed as an official trail because it was very rarely open. Maybe 2-3 days/year max.
The main reason was because we could never say we were 100% OPEN.
Mgmnt hated that fact and figured after 4-5 years it just wasn't worth it and the trail officially came off the map.

2nd reason - YES a lot of people ended up way in over their heads, and many needed a sled ride down, hurt or not...

If you look at the trail maps, you'll still see the Spruce Cliffs trail on the map, though it is not named or colored. Just an interesting tidbit.

You can clearly see the trail next to the "8" indicating lift 8, to the left of Risky Business.

New T-Bar towers are set and base operator shack is being welded into base today. The Locke Triple and T-Bar will in fact share a tower but not one of the current triple towers. A new tower for the Triple is in place and much higher than the existing towers in the area. My guess is the tower immediately before this new one will come out with that cross arm and gear reused on the new tower. They also regraded skiers right of the Triple base on MM including new drainage culverts under the regraded trail. I have to assume this will be the primary exit off MM from now on, no more going to skier's left of the Triple to get to Barker Quad.

Nothing happening on Sundance as of yet, the old carpet has yet to be taken apart.

The Glades looks like it is getting phase 4 as lots are signed on the uphill side of Upper Road and a new trail behind those lots is taking shape. I need to hike up Aurora Road, I have heard this trail will come off of there somewhere I. The neighborhood of the higher exit of Yetiville. Whether a new trail is cut from Sensation down to this trail or they open Aurora Road to official skiing from Aurora base I have no idea currently. But I can't imagine an elite housing ski trail to be accessed only through a Glade.

With all of this, I really wish we were discussing a new Barker Six Pack. As we are not, lift ops was working on Barker this morning as the lift was turning. Seemed like all the chairs off for summer grip maintenance were back online. Hope we get a good season out of frankenlift.

Here's a few pictures. And I stand corrected on the Triple, looks like two more new towers to go in and at least three new cross arm sets, one being a hold down sheave set (likely for the tower immediately before the new tall combo one). 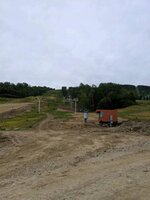 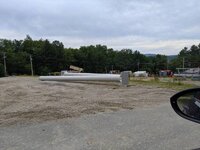 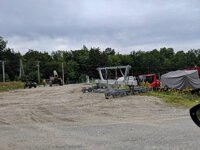 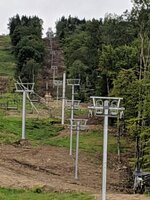 Those are absolutely massive T-Bar towers, wow. Not only in height, but there is a lot of steel there.

If you want the nerd terminology, hold down is a depression tower. There is also a compression tower which has sheaves on top and bottom.

Newpylong said:
Those are absolutely massive T-Bar towers, wow. Not only in height, but there is a lot of steel there.

If you want the nerd terminology, hold down is a depression tower. There is also a compression tower which has sheaves on top and bottom.

I would think. We have heard the cross skiers will be able to unload Midway onto overeasy to access the cross course on Rocking Chair. So I would think some grading will get done. Unless they plan to "grade the line" with snowmaking. The thought is the T-Bar went where it did to be right next to MM's snowmaking lines.

Sent from my Pixel 3 using AlpineZone mobile app
You must log in or register to reply here.