On water at 7am, reversed my usual route and trolled right out to the small island. By 8am Mike and I had caught and released 4 very nice bass: 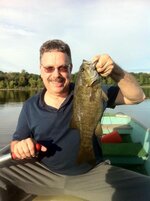 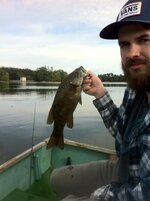 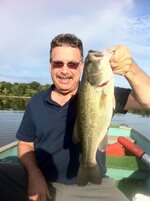 Fished from 7-noon. Not every good spot produced a fish but we continued to catch nice bass right up until 11:45 when we headed back to the boat spot: 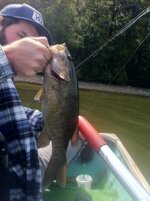 In terms of numbers and quality fish my best day at the East Branch this season. September is magic!

Did a repeat on Friday 9/13 solo. Conditions very similar except for one thing...the wind. Instead of being directly from the east it was northeasterly. The northern component made it colder (I wore a jacket most of the morning) and it was blowing at a faster speed. Whereas on Labor day the worm was the ticket, today it was useless. All fish caught on lures. The boat was usually moving too fast for worm fishing.

So I did a lot of rowing and trolling. Finally found some white perch, caught a nice one trolling then stayed in the area and caught a few smaller ones on a #2 silver fox.
That was it until the end of the old weed bed where I was able to park the boat against some exposed rocks and cast. The rocks are part of a wall that extends out and down from shore. My first cast that lined up with the wall on retrieve got me a nice largemouth: 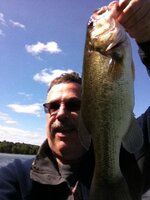 That was my last fishing spot of the day and I headed back in. I left at 12:30 with the distinct impression that the fishing was turning on.

Decided to go to the Catskills on 9/20. Steve and I hiked/waded Pepacton reservoir which was as low as I have ever seen it. That made for long hikes to get to open water, not a ton of fun wearing waders. Seemed like being in the desert with the heat and blazing sun. And the fish were not biting.

Lost the waders in the afternoon and stuck to wet wading. More comfortable for me, but it did not inspire the fish to bite. Saw a few small fish but I caught nothing. In fact, we were skunked at the reservoir. Only fish we caught were a few trout at a private stream we had to trespass on to fish. Lucky to not get caught.

Last few days have been like mid-summer. Hopefully we are done with that after today.

Back to morning action at the EB on 9/28; out at 7:30 and the small island was active. Bass were hitting the surface about 30 feet offshore all around the island. Started out with a Rapala but changed over to a medium crawdad Big-O that had better float. Finally enticed a largemouth to bite, then got another hit on the retrieve on my next cast and landed this fine smallmouth: 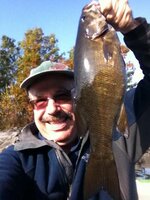 Landed another smallmouth and headed to the boulder where I caught 2 more largemouths. First 2 1/2 hours pretty phenomenal and then the fishing just died. A misty and cool morning gave way to high clouds which then burned off and the day turned clear, sunny and hot. Fished from shore on the second island at the old weedbed, ate lunch, drifted the old weedbed and called it a day at 12:30.
Will probably fish another 2 times or so and call it a season.

Last day on Rye Lake for 2019 on 10/5 with Steve. Cold and windy to start out but turned sunny and warm. Fish were lazy and not biting with gusto. Lost a lot of fish including the biggest ones we hooked.

Last day of 2019 today 10/13 on the East Branch. Hooked one small fish all day. Had fun rowing around and fishing with my oldest son David. So much for fishing 2019.

Nice bunch of fish JimG....sorry to be out of touch for a while. Also forgot my camera on a short trip up to Eagle Lake in late August. HA...the one long trip I take this year and I remember my flyrod & gear but forget my camera..... I catch my two biggest landlocks(salmon, 5 & 6.5lbs) that I've ever caught in addition to some nice woodland pics I would've gotten = the Uh-Huhs never stop for me:lol:.

The last 2 seasons I spent getting better using my depth/fish finder.

This season I spent getting more informed about weather conditions fish do and don't like and the solunar forecast. Because I've learned that just because I can now see the fish that's no guarantee they will bite.

Next year's fishing toy purchase will be a pedal kayak.
You must log in or register to reply here.