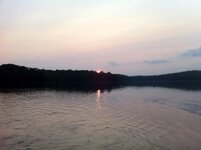 Time to fish. April and early May were pretty brutal; lots of rain and out of control flow rates on rivers and streams made any trout fishing with waders almost impossible. Tried on 5/17 but the Esopus Creek had other ideas. Even with a 4.5 foot wading staff I found trying to stand in the strong currents uncomfortable. And the flow caused the trout to dive for the depths and stay there. Steve's fishing cabin near Woodland Valley Creek was very inviting and cozy though 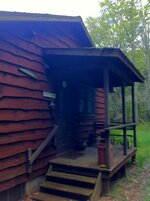 After being driven off the Esopus we headed west to Pepacton reservoir. After bushwacking about 1.5 miles in to a nice gradual point we landed 7 or 8 decent smallmouths. Waders are great for wading into cold river water but not so comfortable bushwacking in humid 75 degree weather. Pretty hot, but also good tick protection.

Got out on the East Branch on 5/27 had a nice row. Yellow perch were biting on the troll. Caught a bunch of small and largemouth bass including a lot of small males. Good sized smallmouths were tucked up on shore and only casts that were thrown almost on to shore were productive. Any onshore cast near fallen wood triggered surface bites. Exciting and frustrating at the same time, many fish get away, tough to hook them. Hooked a nice 4 pounder that got off.

Hit Rye Lake on 5/31. More surface action, the fish were more aggressive this day and we landed a few nice ones but nothing special. Great weather and good fishing. Looking forward to June when bass season starts. Happy hour on Rye Lake 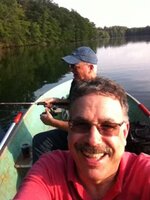 No fish pics yet waiting for the big boys to wake up. Trout fishing might be good in June if the rain stops for a while.

Scotty looking to buy a Belleayre pass for next season. Nice.

Got out on Rye lake last Friday 6/7. Warm hazy sunshine made me think that plastics would be the ticket. Rigged up a Gary Yamamoto 5" senko and never looked back. My buddy Steve used a crankbait for about 10 minutes and switched to the worm after watching me catch 3 bass in 10 casts. We caught a good selection of small and largemouth bass including many nice ones. These 2 hog largemouths were the biggest of the day: 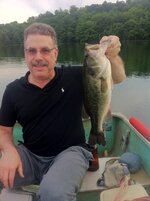 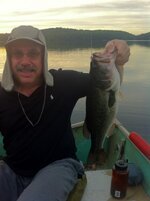 I might contribute a bit to this thread this year. We moved to a place along a river that supposedly has decent smallie fishing. I'm picking up the activity again after a 15 year absence to teach our four year old. Have him signed up for the town youth fishing derby this Saturday.

deadheadskier said:
I might contribute a bit to this thread this year. We moved to a place along a river that supposedly has decent smallie fishing. I'm picking up the activity again after a 15 year absence to teach our four year old. Have him signed up for the town youth fishing derby this Saturday.

They call it fishing because you don't always catch fish.

Went out on Rye Lake 6/21, good fishing for the first 2 hours but no big fish. Then the wind started blowing and the fishing just died. Went out again on the East Branch yesterday 6/22, same SW wind still blowing hard and never saw hide nor hair of a fish. Nothing. Fish do not like strong winds or the pressure gradients associated with that wind.

Nice pics JimG.... Had the same type of May with lots of rain & higher water but healthy hatches which should make for a nice summer.

*Will see what pics I took May-June...will upload later...

Got out on the East Branch Friday 6/28 with my youngest son James. Fishing was better than a week previous but not great. Lot's of fun though we caught about a dozen 1.5-2 pound largemouths. All of them were plenty fat: 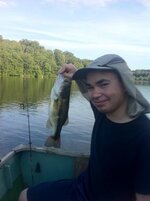 Best part of the day was early on about 45 minutes after we shoved off. I spotted a carp wallowing near shore on the first island and told James to cast over to it. It was his best cast of the day as he dropped his worm right on top of the fish. Even more amazing was that he snagged it on its' dorsal fin (which I have seen happen several times before with other fishermen). A 10 minute battle ensued until James tired the fish out enough to get it along side the boat. This was an enormous carp, easily 25 pounds. I think we were both a little astounded and our momentary admiration gave the carp the last opportunity to thrash and get off the hook. Just as well, what a fight!

Hot and humid yesterday 7/5. With Mike and Karl in the boat rowing was an amazing workout. Sweated buckets and drank a lot of water.

Fishing was good. A real pan fish fest. I caught a dozen bluegills, 6 decent white perch and a few yellow perch. Mike caught a half dozen 1-2 lb. largemouths. Karl caught some pan fish too and hooked his first good sized smallmouth. I was disappointed I did not hook any bass until I caught this very nice smallmouth at the end of the day: 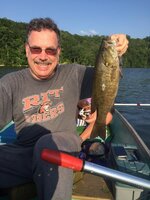 Hit Rye Lake about 3:30 7/12. Not only was it hot and humid there was also a strong NW wind to deal with. Whitecaps forced us to take a perpendicular tack and we wound up at a southeast facing cove with about 300 yards of great looking shoreline; lots of rocks, boulders and deep water access. Nice and shady too. We rowed down to the end of the cove and let the nice breeze blow us back along the cove.

We immediately started catching bass both large and smallmouths. Several were good sized. When we got to the end of the cove we rowed back against the breeze and repeated the same drift. And we caught a few more bass. Rinse and repeat. Stayed in the same spot for the next 4 hours. The bass were super healthy: 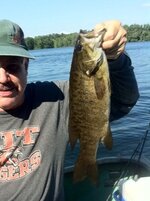 We headed to a few other spots on the way back and caught nothing. At least the wind was now in our favor. Got back to the boat spot at 8:30. Awesome when you find where all the fish are biting.

Brutal weather on 7/19 at Rye Lake. Temps near 95, high humidity and zero wind. We were tortured by stable flies the entire time we were out. Adding to the hatch was the hot weather which supercharged the fly activity. Little bastards somehow know that staying low and biting ankles make it hard for slow humans to swat them. I worked up a drenching sweat trying to kill them. Wound up soaking my long sleeve tee and wearing it wet which was an improvement in temperature comfort. I adapted to the flies by ignoring them as best as possible.
Fishing was pretty good. No big fish to photograph but we each caught a few decent bass in the 2-2.5 lbs. range. Drank a lot of water and avoided happy hour until after the sun set.

Another good day on 7/26 at the EB. Another hot day too. Spent my day rowing in the shade.

Never look a gift horse in the mouth.

The doldrums of August are upon us. Got out on Rye Lake 8/2. Same deal as the past few weeks, a couple of bass for each angler, nothing special.

Got out on the East Branch with my son James on 8/8. Aside from the usual August catch of a few decent bass each, James continued his habit of hooking into a rarely seen lake creature. This time he hooked something huge at the boulder. It was so big it was impossible to reel in with the rod. So I grabbed his line and handlined whatever it was to the boat.

What appeared was a large disc shaped object. Only when it started thrashing its' flippers did I realize that James had hooked a snapping turtle. Decent size too, probably about 45 lbs. Hooked it right in the jaw. We had to lift the turtle into the boat. James held it by the shell while I carefully removed the hook with pliers. It was a clean removal and release.
Don't want to mess with pissed off snapping turtle jaws!

Hit the EB again on 8/9 with similar results. Steve and I each caught a few decent bass. But unlike the day before when James and I were chased off the water by thunderstorms, the weather was calm, dry and cool. We stayed out until 9 or so until the fishing action died. A great evening happy hour!

More of the same on 8/30 but at Rye Lake. Stuck in the afternoon-dark routine, heading out again early morning tomorrow.
You must log in or register to reply here.