Forerunner: The Most Righteous Shop on the Planet

This kinda post probably doesn't usually deserve it's own thread, but whatever. I bought a pair of skis from the Forerunner Shop in Killington, VT. Now, I have bought a number of things in my time, but this was easily, without a doubt, bar none, the best experience exchanging currency for material goods I've ever had. I know that sounds like hyperbole; it isn't.

What follows is the unedited, rambling, and epic recounting of my mogul ski procurement, replete with all the gory details. For the radio-edit:

Go to Forerunner. They are absolutely great. Five-Star, Grade-A operation in every single way.

Particularly perceptive denizens of these forums will remember that I spent a lot of time and effort researching and (over)thinking the decision of what planks to buy as my first pair of skis. On a wild hair last October, I took the advice of jack97 and sent an e-mail to Forerunner just to see if they had any Dynastar Twisters for sale (preferably at a discount). The owner (Brian) personally got back to me and said that he did have one pair, a set of lightly used demos (3-5 days at most) that he'd be willing to let go of for more than 50% off (mogul disciples know that the beloved Twister was discontinued in the 2017/2018 season under the order of parent-company Rossignol). Unfortunately, he told me they were a little shorter than ideal for someone of my height and weight. Instead of trying to up-sell me onto a set of brand new Shamans or Fischers, he actually recommended that I get in touch with one of his competitors (Northern Ski Works, also in Killington) since he knew they carried the K2 244 (another mogul ski that's in the same class as the Twisters). I did; they had a new pair of last years 244s (new in the plastic) in my length that they'd sell me at a discount. Brian told me to think it over; the Twisters were mine if I wanted them, but not to feel obligated because he had three buyers in line behind me if I decided to go with the 244s. So, I spent some time hemming and hawing about which ski to get on. During that time, Brian asked if I could send him some pictures of my boots so he could see what I was working with in that department. He knew full well that I wouldn't be buying a pair of boots over the phone, so he had no financial interest in the consultation, but gave me a lot of great bootfitting and tweaking advice anyway. On top of all that, we ended up spending, all tolled, about two hours on the phone and countless e-mails just talkin' moguls (technique, gear, form, tips, etc.).

When I'd finally decided to pull the trigger on the Twisters, he asked me what I had in the way of bindings. I had none. He said I'd want some Pivots and offered to sell me a set of perfectly good used chrome 12s for $75. I said hell yes, and he included a binding mount, mogul tune, and shipping for free.

I thought it was a done deal, but then right before Christmas I got a phone call from Brian while the skis were in transit saying to check my package carefully when it arrived because he threw a little gift in. On that glorious day when my first set of my very own skis arrived at the house, I opened the box and was a little puzzled when a t-shirt or some stickers didn't fall out. I took out the skis and looked them over; perfect bases, clean edges, minimal topsheet scratches. Then I saw the bindings, they were Look Pivot 12s, but they weren't chrome, they were black. And they weren't used, they looked brand new. Turns out, he couldn't get his hands on the used Pivots he intended to sell me in time for my ski trip in early January. So, he gave me a set of brand new Pivot 12s at no additional charge.

All this was done remotely. I never even set foot in his store, so there was no chance that he could benefit from any impulse buys while I was shopping, like a ski bag, or set of poles, or a pair of goggles. Just an essentially new set of skis sold at a used demo price, and a pair of brand new bindings for what the average person would ask for binders that are a decade old. All because I'm a Texas-based moguls enthusiast (what the hell is wrong with me?!) who can't justify dropping $1,000+ on a bump-specific set up. Just incredible. Hell of a guy. Truly, in the game purely for love of the sport. Thanks again to all yall (especially jack97) for recommending this shop.

I might be a cheapskate, or maybe just have unrealistic expectations of stuff I buy, but rarely do I spend over $100 and not have some degree of buyer's remorse. That wasn't the case this time. I'm utterly as pleased as spiked punch. 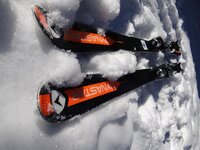 Brian is straight up! His shop and the Pro at Hunter are one of the 2 places I will always visit. They never make you feel like you don't know what your talking about.

Glad to hear you had a good experience! Retail is so tough.
K

Good to know. Glad you posted this. I've never been in there although K has been my home mountain for 11 years now. I'll definitely keep them in mind.

Cool story. Just out of curiosity, being based in Texas, where do you usually ski?

That's the truth. So many other stores either wouldn't've given a Texan on the phone the time of day, or would've talked down to me.

You should. It's a great place. If nothing else, you can rent a nice set of bump skis for spring Superstar.

Glenn said:
Those are often overshadowed online.
Click to expand...

I agree, and that was a big reason I decided to write such a lengthy and dedicated post.

jaytrem said:
Cool story. Just out of curiosity, being based in Texas, where do you usually ski?
Click to expand...

Ha! You should seriously look into building one of these:

Saw Brian last week, he really appreciated the shout out.

180 said:
Brian is straight up! His shop and the Pro at Hunter are one of the 2 places I will always visit. They never make you feel like you don't know what your talking about.
Click to expand...

Yes! Snapped a buckle off my boot and he replaced it for free!

jaytrem said:
where do you usually ski?
Click to expand...

In honesty though, I can make Taos/Angle Fire/Red River in 10 1/2 hours with the timezone change, and Taos is a great mountain (particularly for bumpers). The San Juans are a little further but are only about 12 hours away and those are superb mountains.

Domeskier said:
building one of these
Click to expand...

Holy crap, that's rad!!! I want one. That with this:
will make me a world-beater, and I won't even have to give up my Shiner and chili. I guess I've got some work to do this spring.

Awesome! And I appreciate you letting him know about it.

This is what's so impressive. A lot of people have a lot of things to say about Forerunner, and I've never read a bad review. Never even seen one that wasn't a ringing endorsement. That's a hell of a thing.

I even left his "Forerunner" sticker on my ski.
You must log in or register to reply here.

Older Senior wants to get back into skiing
2