urungus said:
Top of Hop has great coverage but further down there are a few rough spots already this afternoon before the r**n

The new HKD's layed the product down. The much further spaced apart fan guns on the bottom flats of Ridge and the air/water ground Snow Logics on the lower section of Link put down much more of a window dressing than the HKD's did.

Rumor circulating around is that they're going to be more aggressive with firing the system up during the *hopefully* few evening opportunities they may get this week to keep what's open open, and then continue laying down snow on trails like Snowdance that they started at the end of the pre Thanksgiving cold.

Trying to get a November day in to begin the season, but wondering if anyone has information on today's conditions and whether it's worth heading up tomorrow or not. Is Hop still open? Can I park at Carinthia and use Heavy Metal to access the main mountain? Report says so, but also heard that Hop was getting thin before last night's rain and if they close Carinthia access I'll have to park at main mountain. Of course tomorrow's report won't be available until I'm more than halfway there so have to commit one way or the other tonight.

I know if I don't get out tomorrow the rain on Wednesday and Saturday will further decimate the thin cover so it would be another week to 10 days before I'd venture out. Have Epic so essentially no cost to ski, but 2.5 hour drive will be the tougher part.

Any firsthand info is appreciated.

I would expect to still be able to access the main mountain from Carinthia tomorrow. You use Long John from Heavy Metal.
A

drjeff said:
The new HKD's layed the product down. The much further spaced apart fan guns on the bottom flats of Ridge and the air/water ground Snow Logics on the lower section of Link put down much more of a window dressing than the HKD's did.
Click to expand...

Interesting you said that. I was there Thanksgiving day for the first time since Mt Snow became part of Vail, and was hugely impressed with the quantity of product they layed down in a relatively short period of time. However, I was also impressed (not in a good way) by what I considered to be the poor quality of the product. All the trees in the vicinity of the new guns were coated in ice, and the surface of the trails had the scratchy hardpack feel of eastern skiing at its best, with lots of death cookies left by the groomers. Lower down, in the realm of the fan guns, conditions were better. Definitely not what I had come to expect in the pre-Vail days. Made me wonder if they hadn't learned how to dial in the system or lacked experienced operators.

That is the telltale sign of pushing prior to waiting for the piles to dry out. Sometimes ya gotta do what you gotta do to get the trail open. In general Low-E equipment will make a wetter product than a fan gun, and there likely were barely any piles down low to begin with when they pushed.

North Face was empty today. They did a good job of resurfacing after Wednesdays weather. Unfortunately won’t last. 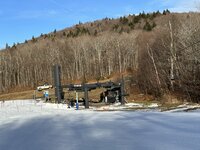 Word around town this evening is that the VT Tramway board issued the Sundance Express its official VT license plate certifying it for operation today. Plan apparently is to get it spinning later next week after the next couple of liquid events pass and they can make snow down by its base ahead of Sundance Lodge opening next weekend for the season.

Sunbrook express is apparently on schedule to be certified and open just prior to Christmas Weekend.

Got my warm weather wax on the skis and plenty of goretex articles of clothing good to go for tomorrow...
C

Cool to see Sundance lift spinning all day loaded with chairs...just need some snow.
This weather was not kind to trails....
Last edited: Dec 4, 2022
C

Guns blowing on primary Carinthia trails since around 7:30am this morning.
Also blowing around base of new Sundance lift...
S

multiple skiers in the woods off Cascade today. not much production from the base area guns. interesting day.

Heading up tomorrow. Were they resurfacing any trails? Was there last week and Hop was thin but very skiable. How was it today?

sugarbushskier said:
Heading up tomorrow. Were they resurfacing any trails? Was there last week and Hop was thin but very skiable. How was it today?
Click to expand...

They were resurfacing a bunch of trails on the main face.

Working on expansion mode as well with Snowdance, N.E. Time, Nitro, Inferno and Cooper Junction under the guns.

Tomorrow should be better than today with some more grooming and more time for some of Saturday's rain to drain out a bit.

Thanks for the updates. Sounds like they're doing what they can without mother nature cooperating.

Was surprised how good it was last Tuesday for my first day out as my expectations were low, so expect the same tomorrow. Still seems like MS has the best early season options out there.

That snowmaking system drops the

they had guns on everywhere today. the lower elevation ones were not doing much. from what i can see, they want nitro express open. they were making snow on inferno - the whole route - and lower fools gold, so i would assume upper fools too to get in place before nitro, the trail , with gulch already on that kinda makes sense and i think they did that last year as well. while on heavy metal i could see nothing sticking on inferno. up higher, little john was full on. also high traverse from the new lift onto southbowl but nothing beyond that connection. i suspect they want to siphon people off that side when they ride the new lift - they don't want them all on LJ, hop and ridge - but they'll need to connect high traverse to cascade - or start on lodge/southbowl proper soon instead. they were also full on on snow dance. they tried to make snow in marginal temps. after the front came thru it was dry, but it was 31/32(f) at the base for most of the afternoon. right now 25(f) at 10pm.

Location
A minute from the Alta exit off the I-15!

I can't recall another mountain that completely flipped a switch in snowmaking fire power in 1-2 seasons like Mount Snow did once West Lake came on board! Usually (as you know) it's years of projects before you notice a substantial difference.

ss20 said:
I can't recall another mountain that completely flipped a switch in snowmaking fire power in 1-2 seasons like Mount Snow did once West Lake came on board! Usually (as you know) it's years of projects before you notice a substantial difference.
Click to expand...

The thing you have to remember about the snowmaking system at Mount Snow, is that when they brought West Lake online a few seasons ago, it wasn't just plugging the new reservoir into the existing system, they essentially built an entirely new, and greatly enhanced, pumping system, air system, various valve stations, miles of supply pipe, new guns, etc, etc.

And they keep making enhancements to it as well.

Was wild to see how many significant trails they had simultaneously lit up yesterday, so many more than they used to be able to do pre West Lake
F

I think the big difference is Peak Resorts didn’t know how to run their system correct. Vail and the current management know much better then the scrubs that used to be there

They have the best setup period. Essentially one massive 24" feed from the bottom of Carinthia to Roy's (boosted) to the top and then umbrella from there. Then the smaller system for Carinthia. Essentially 9,000 GPM right to the top of the hill to send where they want.
C

Before all the guns started firing, I heard a snowcat rumble over to Carinthia the other morning and park next to LP gas tanks. Maybe posting up to start some work soon..
You must log in or register to reply here.