While skier visits to Alta show a double-digit increase over last season, we are currently only 6% ahead of the 16-17 ski season. Our day and multi-day ticket visits are down significantly this season due to the migration of many of our skiers to the Ikon Pass. Our net increase in skier visits from the Ikon Pass is currently running roughly 3%. Our largest increase in skier visits is coming from local pass holders whose visits are up 13% compared to the prior season. With that said, powder is our greatest commodity and we applaud our local pass holders for enjoying this year’s plentiful powder days.

Alta entered into a multi-year agreement to be a limited Ikon destination in January of 2018. This decision was not made lightly and we are closely monitoring the impact multi-resort passes are having on the ski industry, skier patterns and the Alta experience. Please know that we are committed to preserving the Alta experience by matching the number of skiers visiting Alta with our infrastructure, services and terrain.


It seems that they are aware the annual pass holders were not happy and try to defend their position. Meanwhile the data indicated the increase from ikon pass (3%) only contributed to a small part of increase in traffic. It is ironic that most of the increase in traffic was from locals, which happen to be the ones who are complaining the most.

I skied there midweek 2 weeks ago. Lift lines were minimal.

Granted, I'm not a Alta regular. The one thing I don't know is how much those 3% increase (or the 25% increase over the past 15 years) do to the snow quality or on slope crowding.

(I was at Jackson on a Saturday. All I can say is it's bordering terrible in terms of crowding compared to the previous 3-5 years I've been visiting)

I was hoping this was a quote from the blog.
T

I was at Solitude Saturday and had a few lift rides with different locals and they all said it was the most crowded they had ever seen it. There was also 10" of glorious powder, but I think IKON has made a big impact there.

The other thing that one has to consider is that basically for the last dozen or so years, annual total nationwide skier visits haven't really changed very much. Some areas have closed over that time, so naturally there will be some uptick in annual visits at some resorts because of this.

Now the question that is yet to be determined, is if these "cheap" multi resort passes, with a plethora of attractive named "destination" resorts on them, how will it effect the smaller resorts, not on multi mountain passes, if the total number of annual visits still remains relatively flat??

Many resorts, especially those part of multi resorts passes, seem to be going above and beyond with dropping prices and other things to attract, and hopefully retain down the line the millennial demographic as a way to hopefully grow, and at worst maintain the current nationwide annual skier visits as many in that generation seem to feel that there is more of a challenge for them to figure out how to be regular skiers/riders (costs, time involved, social connection while on the mountain, etc, etc, etc) than in generations past...

tumbler said:
I was at Solitude Saturday and had a few lift rides with different locals and they all said it was the most crowded they had ever seen it. There was also 10" of glorious powder, but I think IKON has made a big impact there.
Click to expand...

So, Solitude is a bit different from Brighton/DV/Bird/Alta in that of the Utah Ikon destinations, it is the only Unlimited option. So I would imagine any Utah locals on Ikon ski Solitude a lot now and for the full Ikon price, I bet it beats out Solitude's old stand alone pass price.

The bigger difference this year out west (except for JH and Big Sky who got the goods last year too) is snow. Last year was very anemic in most of the west, so this year with bountiful snow, everyone is out and the local skiers have been jonesing for a year!! All the Ikon resorts that have done analysis are saying the same thing, yes Ikon has added visitors but the largest increase is in passholder visits. And I would imagine the vast majority of those visits are on the weekends. Ikon visits are likely spread out throughout the week and not weekend limited.

Sent from my Pixel 3 using AlpineZone mobile app
A

I was about to start a thread on the "Ikon Effect" to report on my personal observation in skiing 7 resorts in the past 2 weeks.

First and foremost, for the Cottonwoods (Alta/Bird/Brighton/Solitude), the crowding isn't so much on the mountain but on the access road and the parking lot! On weekends, if you're not on the mountain by 10, you'll be parked WAY down the hill, or worse (I actually don't know if people were forced to turned around for lack of parking). But on the slope? The effects are minimal.

-- The Bird: It's a Saturday. And it's a week after they received their motherload of FEET of snow. While the parking situation was dire, the lift lines were no worse than in my past visits, which is to say sometimes there're lines, but after a lap, the line disappeared, then only to reappear another 2 laps later.

-- Solitude on Sunday. No line except the first one getting up the hill in the morning. Now, I've been to Solitude 2 years ago. The slopes were absolutely EMPTY then. Now? You'll actually see people on the slopes, and sometimes have to wait for lure, if you're the fussy kind like me.

-- Solitude on Monday? Well, we sat at the Roundhouse for lunch and watched, to our horror, 6 skiers were seen on the stretch of groomers at the same time! That's the most we've counted.

-- Brighton on a Monday? Nothing out of the ordinary. But since we just crossed over from Solitude, it felt terribly crowded. The maze was 3 deep!

I bet the Cottonwood mountains were scratching their head trying to decide if they should increase the parking or use it as a throttle to keep the numbers on the hill at a manageable level.

However, on those "traditionally uncrowded" mountains -- Deer Valley, Big Sky. The effects were downright terrible! Not in terms of lift lines. But in "lines" on the snow! In DV, the groomers were in pretty bad shape from too many skis beating it down. By afternoon, it's slick and shiny resembling the groomers of Stratton at 11am! Big Sky were affected the worst in my personal opinion (I've been there 2 previous years). Everywhere I looked, there were tracks! What used to be untouched snow for days, they were gone in a matter of hours! Including the glades. The wait for the Lone Peak tram routinely reach over a full hour.

Jackson, which was often busy to start with, now has long lines on almost all chairs. Wait of 5 minutes are almost routine no matter which chair. The bottleneck chair Thunder are almost never less than 5 minutes, more like 10-15! Even the Sublet chair, which has all black except one blue, had waits easily 10 minutes except during the 1st hr and lunch hour.

We had the misfortune to have tried to ski Jackson on weekends, which we found out that's half of Salt Lake City drove up to ski there! Add to that, half of Colorado skiers seemed to be there as well!!! 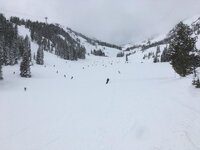 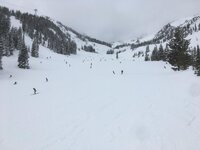 I had no trouble at JH..huge powder days..who knows.
Are we taking into account that the economy is good?
A

What's economy has anything to do with it? Apart from the cheap pass that is.

People were sleeping in their cars!
S

I sense a famous quote will soon be used.

“Nobody goes there anymore, it’s too crowded”

Personally I am truly bummed as I was looking forward to getting to Solitude and Big Sky, both of which used be much less crowded than other destination resorts. Might be time to look at those areas NOT on Icon or Epic.....
S

The Ikon pass sucks and diminishes the local pass holder experience.
Bring on the private country club experience! Just say no to Ikon.
Our mountain is not the same place it was.

abc said:
What's economy has anything to do with it? Apart from the cheap pass that is.

People were sleeping in their cars!
Click to expand...

Potentially quite a bit. Cross continent flights, hotel stays, food, gas, rental car, etc.... these are items of disposable income people tend not spend as much on in times of recession.

slatham said:
Might be time to look at those areas NOT on Icon or Epic.....
Click to expand...

I've been thinking that myself. Anyone know of any bigger ones off-hand?

I guess Sun Valley and Snowbasin count, at least for a few more weeks.
R

Jackson ain’t what it used to be. The days of walk on trams during January storm days are gone. We used to get 40k+ of untracked powder skiing those days. The Village feels cold and unwelcoming unless you're extremely wealthy.

Either implement paid parking or a toll in LCC to promote bus use. Take the money and strengthen the bus system. The traffic thing is a real bad problem here.

Stickied thread at the top of this forum: "Skiing on the cheap"

Main complaint in this thread: "Ski areas are too crowded"

Well make up your mind. And yes, the economy and tons of snow this year are a huge factor. The MAX pass had been around for many years and I don't recall major issues at Alta/Bird.

I'll be in Jackson this weekend and I'll be sure to gather all the complaints from area business owners making too much money. I feel bad that area ski bums aren't getting untracked powder five days after a storm anymore.
Last edited: Mar 13, 2019

raisingarizona said:
Jackson ain’t what it used to be. The days of walk on trams during January storm days are gone. We used to get 40k+ of untracked powder skiing those days. The Village feels cold and unwelcoming unless you're extremely wealthy.
Click to expand...

Teton Village or the actual town? I haven't been to Jackson in 15 years but it felt cold and unwelcoming unless you were extremely wealthy then.

slatham said:
I sense a famous quote will soon be used.

“Nobody goes there anymore, it’s too crowded”

Personally I am truly bummed as I was looking forward to getting to Solitude and Big Sky, both of which used be much less crowded than other destination resorts. Might be time to look at those areas NOT on Icon or Epic.....
Click to expand...

No lines at any of these places. I rented a nice 3 bedroom house near Brundage a couple years ago for about $100 a night. Fresh tracks all day at Brundage and Tamarack. Bit of a pain to get to, but was doing a big safari type trip anyway. Will be interesting to see who else signs on to that one.

Interesting read: http://hotelnewsnow.com/Articles/3033/Impacts-of-the-recession-on-the-2008-09-ski-season
You must log in or register to reply here.